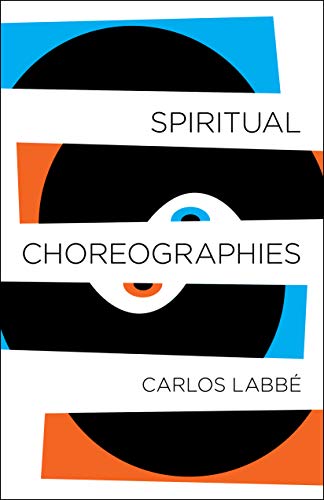 Parallel texts interact to create an implied narrative that the reader is challenged to develop for themselves.

At a surface level Spiritual Choreographies tells the story of a former Chilean rock star who is paralyzed and writing his autobiography using just the movement of his eyes.

His texts are then filtered through an editor who “corrects” them with elaborations and explanations.

It is a bit Beckettian, as the singer seems to shift identities, or at least wants us to believe that he does so, and the editor imposes his own narrative as he tries to make sense of it.

The singer’s prose is impressionistic and vague, referring to himself as “he,”  “the boy,” “the singer;” his partner is “she,” but is she also “the bassist”? and then who is “the other” and who is “the brother”?

The characters harmonize and then separate before merging again into a single entity or different aspects of the same entity.

The editor’s “corrections” are less of a retelling of the singer’s memories and reflections than a complete reimagination. And the inevitable question arises: Is he simply another aspect of the singer—the equivalent of Beckett’s Unnameable of whom Molloy, Malone, Mahon, and Murphy are aspects?

Some passages are genuinely moving, making the singer’s paralysis and means of communication more than a mere literary device:

“These eyelids try to push her away and, when I shut first one and then the other and blink them immediately back open, the screen assumes I am erasing every character in the autobiography until, exhausted, both lids fall shut and all corrections are unmade.”

As with Carlos Labbé’s previous novels, this requires a higher level of reader engagement than more conventional narratives—it is not for passive readers.