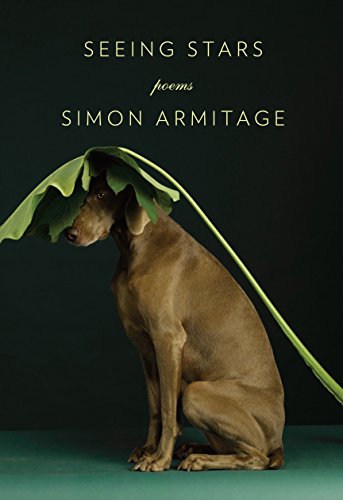 “Each poem reaches a moment when the mood changes, a moment of epiphany that jolts the reader out of his comfort zone and the everyday shimmers slightly as perspectives shift.”

English poet Simon Armitage’s delivery is almost conversational, peppered with observations and asides—a raconteur who knows that the sound of his voice will hold an audience and that his stories will entertain.

On the page these poems have the appearance of formless bodies of text whose lines seem to ramble uncontrollably with random breaks.

They are like mini-short stories running over a page or two with only some of the more elongated forms resembling the traditional stanza poem; however, when read aloud there is a rhythm to them, a seasoned poetic sensibility with half-rhymes and assonances.

The narrators shape shift and change but all retain an essential “Armitageness”—loquacious, witty, and with an appreciation of the absurd, but then flung in to confusion by what they are experiencing. But the jaunty storytelling tone is deceptive.

Each poem reaches a moment when the mood changes, a moment of epiphany that jolts the reader out of his comfort zone and the everyday shimmers slightly as perspectives shift.

There is a dark humor here too, so dark that it can make you feel slightly uncomfortable.

It is not a flawless collection and there are moments when you feel that Armitage is merely writing for the sake of writing, letting an image run away with itself to see where it takes him.

The collection has a surreal, almost psychedelic feel, as if a stoned hippy felt an urge to write down all the images that came into his head because they seemed interesting but when read back are often just disconnected ramblings.

That aside there is much here to entertain and on occasions dazzle, with a phrase or image sending the reader hurtling into a fractured universe into which glimpses of another world come filtering through.

“I’ll Be There to Love and Comfort You” begins: “The couple next door were testing the structural fabric/ of the house with their differences of opinion.”

From a whimsically comic telling of a tale in which the narrator and his wife endure the noise of their neighbors arguing—“pounding and caterwauling carried on right in to the small hours”—the narrative becomes sinister as “a fist came thumping through the bedroom wall.”

From there on we fall into the twilight zone as the narrator pushes his hand through the hole in the wall:

“. . . slowly but slowly I opened my fist to the/unknown. And out of the void, slowly but slowly it/came: the pulsing starfish of a child’s hand, swimming/ and swimming and coming to settle on my upturned/palm.”

Welcome to the multiverse of Simon Armitage.