A Brief History of Portable Literature 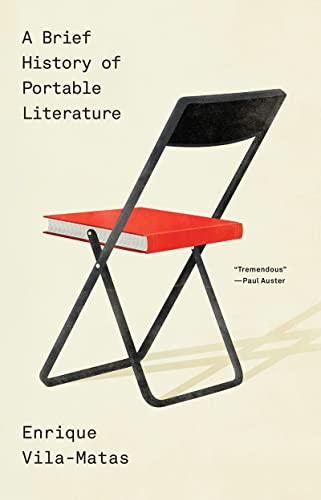 Art and literature in early 20th century Europe seemed to be defined by movements and schools. There were Dadaists, Surrealists, Cubists, Imagists, and Modernists, among others.

No self-respecting author, poet, or artist worth a mention was not a member of or associated with one movement or another, sometimes moving from one school to the next and denouncing those who had stayed behind.

It is against this backdrop that Enrique Vila-Matas introduces us to the Shandies, a secret society of artists, writers and occultists set up to discuss “portable literature.”

The Shandies may be a literary invention but its members include Franz Kafka, Federico Garcia Lorca, May Ray, Salvador Dalí, and Aleister Crowley.

They meet, in secret in venues across Europe—Trieste, Prague, Vienna, Paris—to discuss the perfection of brief literature that penetrates into the mysterious.

As a novel A Brief History of Portable Literature is driven by the idea rather than plot: vignettes, motifs, and a series of set-pieces built around the central theme.

Playful and literary, Vila-Matas presents his cast of fictional lives of real people as if it were fact. He even includes a bibliography at the end.

Numerology, occultism, doppelgangers, philosophy, psychology, suicides, literary Europe and its pretentiousness are woven into a comic mix that is knowingly clever but never takes itself too seriously.

Like its subject matter it is brief, but there is a depth and an authenticity to it:

“. . . the last Shandy—a Saturnine hero with his ruins, his miniatures, his defiant vision and his relentless penumbra—thinks his intensity, his exhaustive melancholic attention will set natural limits on how long he can continue to elucidate his ideas on literature and life; he decides to conclude the book he is working on in order to finish just in time: before it self-destructs.”

Vila-Matas has written much better novels (this is a translation of his 1985 Historia abreviada de la literatura portátil) and this has the feel of a writer just working out rather than presenting a fully formed novel.

There is a buy-in required from the reader, but if you let yourself run with the central idea that drives A Brief History of Portable Literature it is a stimulating read that suggests more than it actually says—as all great “portable literature” should.