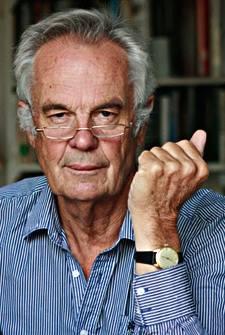 For 17 years Mr. Power wrote a weekly column on foreign affairs for the International Herald Tribune. He has also been a frequent guest columnist for the New York Times and the Washington Post.

He has written eight books on foreign affairs and, in his early days as a journalist, made films for the BBC, one of which won a Silver Medal at the Venice Film Festival. He is an associate of the Transnational Foundation for Peace and Future Research which keeps a library of his columns. Mr. Power is also listed in Who's Who.

Conundrums of Humanity: The Big Foreign Policy Questions of Our Day

Like Water on Stone: The Story of Amnesty International

The Beekeeper of Aleppo: A Novel

Everyone knows about the migration crisis that erupted out of the Syrian civil war.

The Ventriloquists: A Novel

How many tech bloggers writing about cyber crime do you know who can produce a superbly written, eventful, novel on their first attempt? Well, E. R. Ramzipoor has done it.

A Particular Kind of Black Man

“a subtle novel that pulls you into the minutae of the story. The delight is in the detail.

“Smokescreen is a great yarn, well told, easy on the mind, shaped to last the time of a trans-Atlantic flight and to make the journey pass more quickly.”

The Capital: A Novel

To write a novel about the turgid, bureaucratic goings on in the headquarters of the European Union—the so-called Commission, based in Brussels—is as difficult a subject as one can choose.

“This is a book rich in detail. Its tone is neutral. It doesn’t give the impression that the author wishes to see the CIA abolished, merely controlled.”

Surrogate Warfare: The Transformation of War in the Twenty-First Century

“Surrogate Warfare is a well-researched and thorough study of surrogate warfare.

The Infernal Library: On Dictators, the Books They Wrote, and Other Catastrophes of Literacy

“The Infernal Library is truly an imaginative way of looking at history—and it’s by far better written than the words of the leaders Kalder focuses on.”

“polished prose lifts up the tale, raises the tension step by step, and makes it an above-average story.”

A Forgotten Hero: Folke Bernadotte, the Swedish Humanitarian Who Rescued 30,000 People from the Nazis

“Shelley Emling . . . brings Bernadotte to life. Written in an unpretentious style, it portrays close up the . . . most modest of men.

The Great Leveler: Violence and the History of Inequality from the Stone Age to the Twenty-First Century (The Princeton Economic History of the Western World)

Maybe, after all, there is an argument for saying that the world needs more violence, not less, if we are to make its societies more equal.

Finding My Voice: My Journey to the West Wing and the Path Forward

Valerie Jarrett of Chicago was described by the New York Times as “the ultimate Obama Insider.”

“Irish Above All is a likeable book, nicely written and carefully paced—just a bit too long.”

The Lost Girls of Paris

"The unexpected lurks at every corner."

Our Time Has Come: How India is Making Its Place in the World

“If you want to be abreast of the big issues that the electorate is focusing on in the current election no book has more authority than this one by Alyssa Ayres, a senior fellow of the Coun

Machines Like Me is the result of very special literary brain, the master of all he turns his writing to, fantasying deep into our imagination, a novelist with the ability to turn complex

It took Li Er 10 years to write this book and it shows. The story meanders along, and every time you pick up the book to read some more you have to think where you were.

Empires of the Weak: The Real Story of European Expansion and the Creation of the New World Order

By 1914 Europeans ruled 84% of the globe. How did they do it? Eleven hundred years ago Europe was a backwater.

If you are an admirer of the FBI and/or the CIA you may not like this book, but you still should read it. The FBI is seen as too bureaucratic for its own good and many of its agents inept.

The Island of Sea Women: A Novel

Death Is Hard Work: A Novel

“Death Is Hard Work is a short book, but one learns more detail of the life of war than from a hundred newspaper and TV reports.

What Hell Is Not

A beautifully written novel, translated from the Italian, with a heartwarming story against a backcloth of misery and degradation, about a priest and a gang of boys and one of the boy’s sister, 16-

My Sister, the Serial Killer: A Novel

“Braithwaite has the ability to interject the unexpected and interpolate the tension.”

Blaming Immigrants: Nationalism and the Economics of Global Movement

“A wall cannot be built to stop immigration. We have to learn to make the best of it.”

“Perhaps the Congo is at its darkest just before sunrise. Let us hope so, even if its history suggests otherwise.”

"quite a nicely baked short yarn, rather than a novel, but written a bit like a soufflé, rising in the oven but when eaten there isn’t that much substance."

Diderot and the Art of Thinking Freely

Diderot was one of the three genius philosophers of the French Enlightenment.

"If [Madhuri Vijay] goes on like this she will enter the first rank along with Arundhati Roy, Anita Desai, Vikram Seth, and half a dozen others. We will see much more of her."

An Orchestra of Minorities

"Chigozie Obiama is one of many top-notch Nigerian novelists writing today."

The Silk Roads: An Illustrated New History of the World

Peter Frankopan is professor of global history at the University of Oxford. Steeped in knowledge of the world’s past he has written this book for his four children.

Fiction as nonfiction. The past master of this is the great Norwegian novelist Karl Ove Knausgaard. But Thomas Mallon in this fascinating novel Landfall has also written in this way.

The Age of Walls: How Barriers Between Nations Are Changing Our World

“Fences and walls are not necessary. Mostly they are manifestations of superficial thinking.”

Fear: Trump in the White House

What do we have to truly fear about President Donald Trump? He pulled off the successful re-negotiation of the North America Free Trade agreement.

The Hell of Good Intentions: America's Foreign Policy Elite and the Decline of U.S. Primacy

At last a book that attacks the “Blob” and holes it below the water line. Whether it can sink it is another matter.

On the Future: Prospects for Humanity

“Suppose aliens existed, and that some had been watching our planet for its entire forty-five million centuries, what would they have seen?

Another crime adventure from the Pulitzer prize winning Robert Butler.

The Ensemble: A Novel

The Ensemble is a novel played to music. It’s the story of four musicians who at college decide to form a string quartet.

Revolution Française: Emmanuel Macron and the Quest to Reinvent a Nation

At the June 2018 European summit the leaders spent most of the time discussing immigration restrictions. Yet the Syrian rush through the Mediterranean is now a trickle.

Yes We (Still) Can: Politics in the Age of Obama, Twitter, and Trump

“Obama was a light. Trump is of the night.”

A speech of General George Patton, a famous World War II warrior, has an uncanny resemblance to the philosophy of Donald Trump. “All real Americans love the sting and clash of battle.

The Only Story: A novel

A new novel by Julian Barnes is exciting.

Absolute Power: How the Pope Became the Most Influential Man in the World

This present pope—Francis—is probably the most powerful man in the world.

"Afterward Brzezinski was asked if he had woken his wife. “No,” he said, “if she was going to die, better it was in her sleep.”"

Crusade and Jihad: The Thousand-Year War Between the Muslim World and the Global North (The Henry L. Stimson Lectures Series)

What do we in the West know about Islam? Perhaps more than we did before 9/11 but not much.

How to Do Things with International Law

We are soon going to have a clash between President Donald Trump and international law.

Unjustifiable Means: The Inside Story of How the CIA, Pentagon, and US Government Conspired to Torture

Looking for a good cause for 2018? Something you can do while sitting in your armchair? Something that needs to be done if we are to live in a “clean” planet?

The Doomsday Machine: Confessions of a Nuclear War Planner

The nuclear weapon missile business is contradictory, full of missteps, highly dangerous and prepared in its madness (Mutually Assured Destruction, aka MAD, they used to call it in Cold War days) t