A Forgotten Hero: Folke Bernadotte, the Swedish Humanitarian Who Rescued 30,000 People from the Nazis 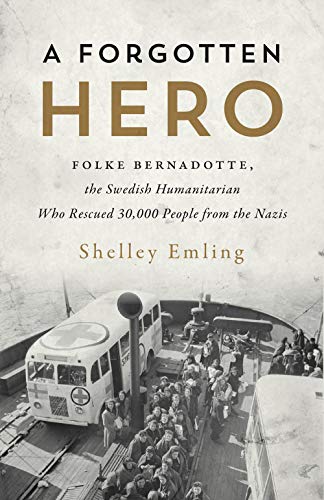 “Shelley Emling . . . brings Bernadotte to life. Written in an unpretentious style, it portrays close up the . . . most modest of men. She does a superb job in rectifying the cloud of obscurity that has settled over him.”

Many know about Raoul Wallenberg, the Swedish diplomat in Budapest, who led his embassy in a successful attempt to issue “protective passports” to at least 6,000 Hungarian Jews so they could escape the Nazi occupiers and travel to Sweden. He also helped forestall a planned massacre. He became the second person to be given honorary US citizenship.

Many also know about the magnificent effort by the occupied Danes to use small boats to enable around 7,000 Jews to cross the water that separates Denmark and Sweden to get them to neutral Sweden.

And about the German businessman, Oskar Schindler, who later became the star of Stephen Spielberg’s masterpiece film, Schindler’s List, that showed how he used his business in Poland as a means of sheltering a thousand Jews.

But how many know about Count Folke Bernadotte, the Swedish aristocrat, who arguably did the most to save people from the concentration camps in the latter years of World War II, at the time when Winston Churchill, prime minister of Britain, said, more or less, that he didn’t want to know about their plight?

Shelley Emling brings Bernadotte to life. Written in an unassuming style, it portrays close up a man who could be excused if he were pretentious about his achievements but in fact was the opposite, the most modest of men. She does a superb job in rectifying the cloud of obscurity that has settled over him.

Needless to say, in Sweden he is as well a remembered icon as is Raoul Wallenberg. He was descended from the Bernadotte who was Napoleon’s top general. The Swedish court in the first decade of the 18th century was in disarray after the death of King Karl XIII. His two children had died in infancy. The country had no heir to lead it. So the parliament made the decision to look elsewhere for a king and, as admirers of Napoleon, they invited Jean-Baptiste Bernadotte to take over the throne. The Swedes took to him. He attacked Norway and absorbed it into Sweden.

This was the last war Sweden has ever fought. From 1814 on Sweden became, if not pacifist, a committed neutral entity, which later enabled Folke Bernadotte to be able to gain regular access to Hitler’s number two, Heinrich Himmler, and to negotiate one large-scale release after another.

Bernadotte, an ex-soldier, inherited his family’s idealism. He once wrote: “We weren’t brought into this world to be happy but to make others happy.”

As vice-president of the Swedish Red Cross, starting in 1943, he led his country’s amazing humanitarian efforts.

The Nazi extermination plan, which involved not only Jews but gypsies, homosexuals, communists, prostitutes, foreign women who had married Germans, and German women accused of working against the Nazis, was implemented by Adolf Eichmann whose boss was Himmler. Bernadotte engineered a meeting with Himmler—and there were three successive ones. Progress was excruciatingly slow, but he did win bits and pieces of concessions, such as allowing Bernadotte to corral the Danish and Norwegian prisoners into one camp so that they could come under the care of the Swedish Red Cross.

By 1944 Himmler was beginning to see the writing on the wall about Germany’s coming defeat. Bernadotte played on this, determined to forestall Himmler’s plan to murder every Jew in the camps so that if the Allies arrived they would find no evidence of the gas ovens and the inmates. He persuaded Himmler that, facing defeat, he should present himself in a better light than Hitler. However, Himmler knew that if Hitler found out about his cooperation with Bernadotte Hitler would be enraged. Thus every step he took toward Bernadotte was excruciatingly slow.

In the end in the first step around 7,500 women, including a thousand Jews, were released from Ravensbruck concentration camp. Himmler had allowed the Swedish buses to come to door of the camp. Bernadotte was acting at full speed fearful the Soviet army would arrive, open the gates, but rape the women. Altogether Bernadotte spirited away by one means and another 30,000 prisoners.

In his last meeting with Bernadotte, Himmler offered a deal. He would order the release of all the prisoners if Bernadotte via the Swedish government would send a message to the Allies’ chief commander, Dwight Eisenhower, to say Germany would cooperate in an effort to stall the Soviet advance.

Relaying Himmler’s offer to Stockholm cost Bernadotte nothing, but he was able to wring more concessions out of Himmler. He got Himmler to approve the capitulation of German troops in Denmark and Norway.

The energy, cunning, and forcefulness that Bernadotte deployed is excellently portrayed in the book. It spilt over into his post-war work in Palestine on behalf of the United Nations. It is one of the great ironies of the last century that Bernadotte was murdered by the Jewish Stern Gang because he supported the idea that Jerusalem should be the capital of a new Palestine, as well as Israel’s capital. Yitzhak Shamir, later to be a prime minister of Israel, was a mastermind of the murder.

Bernadotte was only 54 when he died. One can only guess at the great things he would have done if he had lived. Perhaps he could have pressured the Israelis into accepting a two-state solution. That’s what he wanted, and his will power was legendary.