Our Time Has Come: How India is Making Its Place in the World 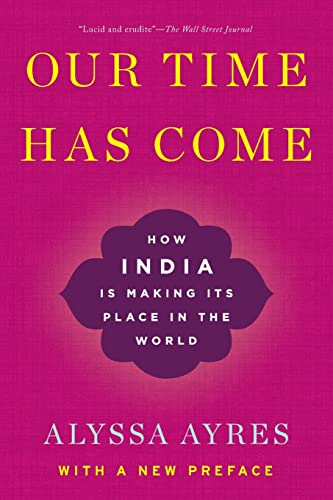 “If you want to be abreast of the big issues that the electorate is focusing on in the current election no book has more authority than this one by Alyssa Ayres, a senior fellow of the Council of Foreign Relations. It covers the issues and debates in depth and with succinct clarity.”

Conversation with Manmohan Singh was always fascinating at the time he was prime minister of India. It was difficult to challenge his superior intellect. He could, in his calm, disciplined way, out-argue anyone. He saw where India was going with a degree of exactness that dwarfed other observers.

On the economic front it was, for his Congress Party government, all about ending poverty which he thought doable, although achieving a fairer income distribution was much more difficult. On the political front it was all about catching up with China, which three decades ago had been on the same level as India but was now way ahead. And it was about making peace with its nuclear-armed adversary, Pakistan.

In the election, which India is now in the middle of, the issues remain the same, except that the incumbent right wing Prime Minister Narendra Modi adds his own twist and interpretations. He has brought Hinduism more center stage, creating an atmosphere that intimidates India’s sizeable Muslim population and scares off Pakistan. He hasn’t tried to make peace with Pakistan in the vigorous way that Singh did. (Although in the end, having seized the olive branch offered him by the Pakistani military president, Pervez Musharraf, Singh failed to grasp the magnanimous deal then offered, somehow unable to stand up to the pressure from his foreign ministry and the military, and the antagonism of much of public opinion.)

Modi lays claim to the great progress that has been made in reducing poverty. In the last election he pointed to the significant industrial and development progress made when he was chief minister of the state of Gujarat. True, Gujarat’s GNP had grown fast, but the state hadn't achieved the social progress that he claimed.

Where there can be a claim for great achievement it is in India’s once poorest state, Bihar, whose chief minister has long been Nitish Kumar, who, in the retiring government, aligned himself with Modi’s party, the BJP, despite his own socialist leanings. Before he took office Bihar’s annual growth rate was 3%. Then it accelerated to an astonishing 15% and its average income per head doubled. It’s out-performing any region in China.

It’s the fastest growing state in India, and it has the fastest growing mobile phone market, reaching into the smallest villages. Kumar has appointed more than 100,000 school teachers, paved hundreds of long roads, ensured that doctors work for a time in primary health care centers in the villages and poorer parts of towns, cut female literacy in half, leading to a rapid fall in population growth, has given every girl who completes secondary school a bicycle, and turned around a lawless state by a severe crack down on criminality.

If you want to be abreast of the big issues that the electorate is focusing on in the current election no book has more authority than this one by Alyssa Ayres, a senior fellow of the Council of Foreign Relations. It covers the issues and debates in depth and with succinct clarity.

Modi’s own record on the economy is mixed. While Bihar’s growth rate was 14% last year, India as a whole had only 6.6%. This compares unfavorably with the Singh government’s growth, which for one year hit 10% and for a number of years was over 8%.

Nevertheless, Modi has kept in place the development successes of the Singh government. One of the most important is the digitalization of the whole population of 1.4 million. This means every person has a tamper-proof ID card. Subsidies can now be directed at individuals with cash payments instead of through middlemen who have creamed off sometimes 50%, sometimes more, of what was being provided.

Modi, too, is building in its own fashion on a scheme promoted by Singh to ensure a basic income for the poor. Already the government is paying benefits to farmers who own less than two hectares (five acres) of land. In this election campaign Congress has promised cash payments for the poorest 50 million households.

Larry Summers, the former US Treasury Secretary, whom Ayres quotes, has made a telling observation about the future of India: “India will look at a nation that has the world’s largest labor force, that has by a wide margin one of its three largest economies, that has over one billion people in middle class living standards (about the same as the US and Europe combined). From the vantage point of 2040 people will look back and recognize that India was the first developing country to embrace on a major scale the ‘knowledge economy.’”

Ayres herself observes: “The India of the coming generation will affect the world far more profoundly than the India of the late twentieth century . . . A 10 trillion dollar economy would place India just behind China and the US. By 2040, the world’s third largest military will have modernized its platforms, become a major naval power in the Indian Ocean . . . By then India will have the world’s largest population, the world’s largest workforce, one of the world’s biggest middle-classes. India’s advanced technology services economy has already positioned itself as an innovation power, though employing a relatively small percentage of its population.” She says that India from now on will have a higher economic growth rate than anyone else . . . If that happens everything else falls into place,” she concludes.

Above all, as in China today, serious poverty will be almost eradicated. But unlike China, as these weeks in April show, India has a vibrant democracy. That will be, as far as one can see ahead, its trump card. Because of this, India, some predict, (Ayres only alludes to this possibility—a pity), will overtake China. This will happen whoever wins this election—and the next one.