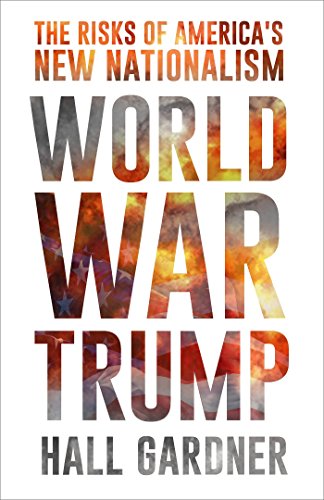 A speech of General George Patton, a famous World War II warrior, has an uncanny resemblance to the philosophy of Donald Trump. “All real Americans love the sting and clash of battle. Americans love a winner and will not tolerate a loser-—Americans despise cowards. Americans play to win—all the time. That’s why Americans have never lost, not ever will lose a war, for the very thought of losing is hateful to Americans.”

Then came the Korean War (a stalemate), Vietnam (a loss), Afghanistan (mired in unconquerable mountains), Iraq 2 (a quagmire).

Nevermind the failures, with Trump in the saddle a new toughness is apparent. He’s in the middle of conflicts with North Korea, Russia, Iran, Syria, China, Yemen, Somalia, Libya, and in Niger and Mali. “Fire and Fury,” aimed at North Korea, is in danger down the road of becoming his mantra.

Recall that the U.S. commander in Korea, General Douglas MacArthur, advocated using 34 nuclear weapons on targets in Korea and China. Polls today show that a majority of Americans would think it right to use them if America were attacked. Obama would never have pressed the button. Don’t be so sure about Trump sometime over the next few years.

Where are the risks? This is the big question put by Hall Gardner. It is a far-ranging answer, covering the whole waterfront of foreign affairs with great thoroughness. Not even Zbigniew Brzezinski or Henry Kissinger have written such a book.

*  Russia: Trump has pushed for a fast build up of America’s military might, including nuclear weapons, even though America has a military expenditure as high as the combined total of Russia, China, Japan, the UK, France, Saudi Arabia and India. He has no plan to discuss arms cuts, to take missiles off hair-trigger alert nor to take up ex-president Dmitri Medvedev’s important proposal for a new European Security Treaty. This would deal with Russia’s anger at the expansion of NATO up to its borders despite promises to Soviet president Mikhail Gorbachev not to, while getting Russia’s soldiers out of Ukraine and ending its military maneuvers in and around the Baltic.

Ukraine needs to be de-militarized, but Trump has decided to arm the government with sophisticated weapons. To deal with rebel demands the reasonable request for decentralization—as practiced in the UK—should be met.

*  China: Trump has provoked China unnecessarily over Taiwan. This small island which has provided much of China’s investment is claimed by Beijing to be part of China. It is not. But it should not, as a counter move, declare independence, a policy that Trump seems to lean to. Rather it should realize the quiet status quo is the only policy worth its weight.

Trump is aggravated by Chinese claims to islands in the South and East China seas. U.S. warplanes already cross the borders of China’s Air Defense Indentification Zone in the East China sea. In the 1950s the U.S. nearly went to war with China over the off-shore islands of Qemoy and Matsu, owned by Taiwan. President Dwight Eisenhower considered using nuclear weapons. Eventually China did pull back.

These days no one in their right mind wants to provoke a major war fought over tiny uninhabited islands. If this be true then the Pentagon should be ordered to take its military far away, so war cannot happen.

On the economic front there is a danger that Trump is initiating a trade war which in the long run will lead to a U.S. defeat. China has most of the cards. The total size of its economy is fast catching up with the U.S. It could buy its planes from Airbus rather than Boeing etc. It can start selling its vast savings in U.S. Treasury bonds.

*  Iran: To Trump Iran is the source of all the problems of the Middle East: “From Lebanon to Iraq to Yemen, Iran funds, arms and train terrorists, militias and other extremist groups that spread destruction and chaos across the region.” Trump has gone to great lengths to make sure Saudi Arabia benefits politically and militarily from his views, even though for years its government has permitted funds to be sent to Al Qaeda. Such an attitude undermines the job of making ISIS and Al Qaeda the primary target, as they should be. It is Iran, Iran, Iran, even though Iran is a force for defeating extremists. Yet Iran can be negotiated with as the U.S. discovered when it succeeded in sealing a highly important de-nuclearization agreement. Trump wants to rip that accord open, even though he should know that North Korea will never trust a US deal if that’s what happens two years later.

*  North Korea: Negotiations are now underway between the North and the U.S. If they work then that should be an example for how to deal with other problems. If they fail, then we should worry that Trump might lead us into a war that could become nuclear.

With Obama, even though he made grave mistakes, one felt there was a momentum toward peace. With Trump it just seems to be, North Korea excepted at the moment, a momentum to war.

Gardner opens his book with an apt warning: “The US will not only need to formulate its foreign and defense policy but also radically reform its system of governance and its domestic political-economy—if it is to both achieve peace abroad and work to mitigate tendencies toward even deeper social, economic and political polarization within the U.S. itself.” The book provides good answers to his warning. Every foreign affairs student, journalist, academic and policy maker should make reading it a priority.