Unjustifiable Means: The Inside Story of How the CIA, Pentagon, and US Government Conspired to Torture 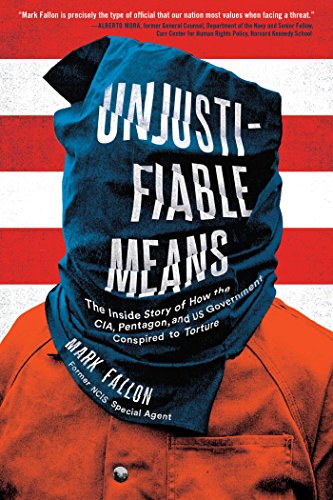 Looking for a good cause for 2018? Something you can do while sitting in your armchair? Something that needs to be done if we are to live in a “clean” planet? Campaigning against torture is what it is. It can be done by email, s-mail, phone, text, and petition signing. In the past, water dripping on a stone has worked and can be made to work again.

“Torture works. OK, folks? Believe me, it works. . . . And waterboarding is your minor form, but we should go much stronger than waterboarding,” said Donald Trump while campaigning to be president.

At the moment, as far as we know, the U.S. is not torturing anyone. President Barack Obama put a stop to the practice of it by the administration of President George W. Bush. Even Trump says that since the Secretary of Defence, General James Mattis, is against re-introducing it it probably won’t happen. But one day Mattis can be sacked and someone more pliant installed in his place.

The UN Convention Against Torture was passed by a huge majority in 1984. In total 156 countries approved it. But according to Amnesty International, 141 countries out of 193 still practice torture and other forms of ill treatment.

Ancient Rome tortured the early Christians. The Church, repelled by what had happened then, for more than a thousand years used its influence to ensure that torture was abolished in Europe. Tragically, as a tool of the Inquisition, parts of the Church brought it back.

In 1640 England abolished torture. (Nevertheless, the Labour government of Tony Blair at the time of the Iraq War did send those it wanted vigorously interrogated to countries which sanction torture).

In Prussia torture was abolished in 1740, in France in 1789, and in Russia in 1847. (The Soviet Union, until Mikhail Gorbachev came to power, used it a lot.) In the U.S. in 1789 Congress passed the eighth amendment to the constitution which forbade “cruel and unusual punishment.”

Four years ago the U.S. Senate Intelligence Committee published its (summary of) report on America’s use of torture since 9/11, 2001. The report showed in its 6000 pages that the use of torture, over the seven years of its practice, did not gain valuable intelligence and that information could have been better unearthed by sophisticated traditional methods of interrogation.

In a new revealing, important and sometimes mind-blowing, book, Unjustifiable Means, Mark Fallon writes that “waterboarding, sleep deprivation, dog leashes, sexual humiliation all send us tumbling into the filth where our sworn enemies live, and it legitimizes their struggle in the eyes of their followers even as it delegitimizes us in the eyes of the world.”

Fallon was commander of the task force that investigated the lethal October 2000 attack on the USS Cole as it was being refueled at the docks in Yemen. For 27 years he worked for the Navy Criminal Investigative Service. In that role he was a regular visitor to Guantanamo Bay where he fought hard but unsuccessfully the local top brass and their superiors in Washington not to treat detainees inhumanely.

He recalls how once he was in London to brief senior European and NATO authorities on “lessons learned” from his investigation of the Cole attack. He argued that “I had seen time and again that building rapport with detainees yielded far better actionable intelligence than the strong arm approach, and prevented more attacks in the future.” (He explains the techniques and application of a non-violent approach to interrogation in some detail. Readers of his book should make a point to remember these for the occasions when they get involved in argument on the issue.)

The FBI, he states, did a first class job with non-violent interrogations to reveal who was behind the Cole attack. One detainee accused of being part of the attack cell identified other Al Qaeda members and safe houses. It was “an intelligence-collection bonanza.”

But later Bush effectively took the 9/11 investigation out of the hands of the FBI and placed it with the less scrupulous Department of Defense whose head was Donald Rumsfeld. He had no qualms about authorising the use of torture. The CIA, too, was full speed ahead for the use of torture.

Guantanamo, we now know, housed only a handful of detainees who actually possessed knowledge that the U.S. needed to know. Too many were badly tortured. War crimes and crimes against humanity were committed. They have not been investigated and their practitioners punished. The International Criminal Court should announce an investigation, even though it knows any charges it makes will be vetoed by the US in the UN Security Council. The Court should publicize what it knows and stand by it.

Torture is a world-wide disease. All of us need to campaign against it. The insiders like Fallon need the help of the outsiders—us.