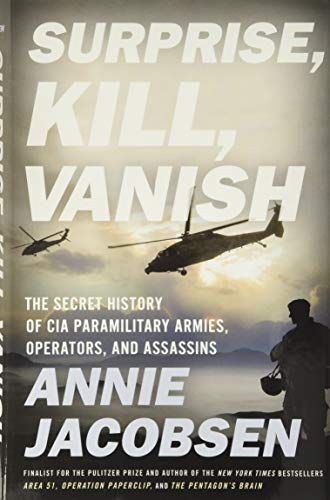 “This is a book rich in detail. Its tone is neutral. It doesn’t give the impression that the author wishes to see the CIA abolished, merely controlled.”

The International Criminal Court (ICC), which prosecutes crimes against humanity, is under attack again by the Trump Administration for pursuing Americans. Bill Clinton and Barack Obama supported it. George W. Bush tried to close it down but then decided to cooperate with it. Donald Trump is against it and encouraged John Bolton, his National Security Advisor, to publically savage it earlier this month.

This is a first rate book on the CIA, its paramilitary armies, operators, and assassins. In other words, meat for the ICC. It crosses the moral lines all the time. Surprise your target, torture or kill your enemy, vanish without a trace. Then deny it. That was and is its intent. That is what Annie Jacobsen describes in riveting, well-researched detail. The whole book should be read by prosecutors everywhere, not least those on the ICC. It should propel them into more regular prosecutions of Americans.

This kind of systematically organized secret activity was begun by the British during World War II, the Special Operations Executive, (SOE), which evolved into James Bond’s MI6. It crossed the Atlantic to become the OSS and later the CIA, although President Harry Truman thought, “soldiers of democracy do not fight guerrilla wars. Gentlemen do not slit throats,” as Jacobsen puts it. He closed down the OSS.

The same reservations were held by many British generals. When SOE hatched a plan to assassinate Hitler they opposed it, worrying that it could open the way to a war crimes trial. The plan was scrapped. But over in Washington a young Bill Casey, head of the OSS’s operations in Europe, hatched his own plan. Casey was later to become under President Ronald Reagan director of the CIA, and a ruthless one. General Dwight Eisenhower overruled the Hitler operation—he had deployed the army close to Hitler’s mountain residence, and it was planning to capture him.

In 1947 Truman had changed his mind, worried that Stalin was intent of expanding the borders of the Soviet Union (which we now know from an overwhelming majority of historians knowledgeable about this period was a false fear). Congress passed the National Security Act, and the CIA was formed.

Its first test was not in Eastern Europe; it was when North Korea with Chinese military help invaded the South. Truman decided to fight. The CIA concentrated on behind-the-lines paramilitary actions. But there were dozens of disastrous operations. Thousands of anti-communist foreign fighters and their American handlers were parachuted into North Korea, never to return.

The next big effort was in Guatemala. The CIA easily deposed a left-leaning president, said to be a “communist,” set on reforming the distribution of land in a country where 2% of the people owned 70% of the land. A right-wing dictator was installed. Over the next half century the majority Indian population was cruelly suppressed by a government and army, supported by a majority of the white colonial population.

Guatemala was where Che Guevara studied to be a doctor. He wanted to work with the resistance, but the militia movement assigned him to hospital work. Much later, after the Cuban revolution, when he worked side by side with Fidel Castro, he was assassinated in Bolivia by CIA-trained local troops as he tried to organize a revolution.

Those who like wearing Che T-shirts should know he was an advocate of nuclear war against the US. So extreme was he that Soviet President Leonid Brezhnev asked Castro to shut him up.

When it came to nuclear weapons it was the US that was far more dangerous. In the early 1960s operatives trained in the waters off the coast of Okinawa in Japan. Launched from a submarine they set off to emplace a tactical nuclear weapon into the target area. They carried a real atomic weapon.

In the Congo in the 1960s, the CIA helped the successful effort to assassinate the anti-Western prime minister, Patrice Lumumba. Next was the effort to kill Castro, a plot initiated by President Eisenhower—the Bay of Pigs. It failed miserably.

Vietnam was the next big CIA operation. Interestingly, CIA director Allen Dulles told President Eisenhower in 1954 that a majority of the Vietnamese supported the communist-led Viet Minh. His advice was ignored. The CIA was active during the war. Once, it aided the military by performing a landscape analysis to see where it would be best to use a nuclear bomb.

Jumping to 2000 the CIA’s great achievement was to track down Osama bin Laden in Pakistan. President Barack Obama ordered a commando raid on his house, and he was killed. Obama shut down the CIA’s “torture program,” but he had few reservations about using CIA drones to assassinate Taliban and ISIS soldiers and supporters.

Trump wants to re-establish the torture program but hasn’t yet. The CIA dares not ask for it.

Meanwhile, the ICC gets ready to prosecute American soldiers and CIA operatives. There is more to come, and so there should be. The ICC should not be deterred by Trump and Bolton.

This is a book rich in detail. Its tone is neutral. It doesn’t give the impression that the author wishes to see the CIA abolished, merely controlled. By the end of the book readers will feel pushed to decide for themselves whether the CIA is a force for good or bad—or something somewhere in the middle.