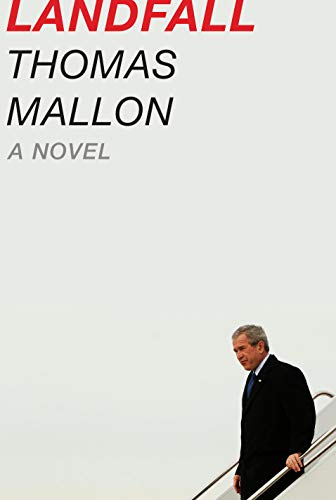 Fiction as nonfiction. The past master of this is the great Norwegian novelist Karl Ove Knausgaard. But Thomas Mallon in this fascinating novel Landfall has also written in this way.

The story of President George W. Bush, his acolytes, his father and mother, is so lifelike that when one realizes one has been deceived so cleverly one has to take one’s hat off to the author.

How he got the information for his fascinating saga is to be wondered at. He is the Bob Woodward of fiction.

It’s a book with two layers. First, the straight political. The second is the friendship Bush begins with one of his staff, Allison O’Connor, a military lawyer, who is on the National Security Council and has been planted there by the secretary of defense, Donald Rumsfeld, who is cast as the single top official arguing for withdrawal from Iraq. Her new boyfriend, Ross Weatherall, catches Bush’s eye because of his self-effacing work in New Orleans following the great flood.

Allison complicates her story by deceptively getting Ross to make her pregnant and then refusing him to have anything to do with the baby or her.

Rumsfeld’s intrigues are fascinatingly told: “Allie nodded. More troops, not fewer. And yourself?” Condi (Condoleezza Rice, first National Security Advisor and then Secretary of State.) envied this woman for her directness, the slight overstepper and thus didn’t offend. “It may turn out to be the only option, and if it does, we can’t have the president being opposed by his defense secretary.” “How would you avoid that?” Allie was aware of the distancing quality of her own locution, as if she were speaking into a phone she knew was bugged, trying to preserve deniability.

“By convincing the president to get a new secretary of defense.” Saying this, Condi felt the way she had in Baghdad last week. But she made herself continue, “Don doesn’t want to shoulder the burden or the guilt.” She had gathered her courage and began to press the seduction: “I hear from people that you’re the kind of person we need more of on the ground over there.” Alison was not about to say, “I have an eight-month-old baby.”

Allison goes to Iraq for a few months. Before she leaves, thanks to the intervention of her mother, Ross is brought back into the fold. When she returns they live happily ever after with the blessing of the president who had pushed Alison in that direction, jokingly threatening an executive order if she didn’t get on with it.

The book is full of intrigue. It’s swiftly told in convincing detail. Mallon has a deft touch. There are plenty of unexpected twists and turns.

Bush is painted as a nice man, even if his political decisions, in particular on Iraq, are flawed. Rumsfeld is a bit of a schema who should have resigned if he felt as he did. Rice is presented as Bush’s honorable servant, determined to anticipate Bush’s decisions. In the wings are the Machiavellian vice president Dick Cheney and Brent Scowcroft, National Security Advisor to Bush’s father who from the onset has had no time for going to war.

Parts of the book are fiction but there is plenty of fictionized nonfiction that rings true. It’s a very good novel of this particular genre.