Finding My Voice: My Journey to the West Wing and the Path Forward 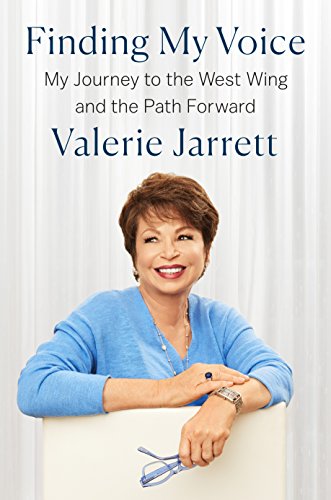 Valerie Jarrett of Chicago was described by the New York Times as “the ultimate Obama Insider.”

In 1991 she was working in city hall and it was one of her tasks to interview Michelle Obama who was then the fiancée of Barack. She hired her. At the time Jarrett held the senior job of commissioner of planning and development. The New York Times reported that for four years she presided over “a rancorous but largely successful makeover of the city’s landscape.”

Over time she became the Obamas’ close confidante. She became their political and personal advisor, a strong and wise person who they looked up to. She followed them to the White House and was Obama’s longest serving advisor.

When he was running for state senator in Illinois in 1997 she saw him lose speed. He confided that his heart wasn’t in it. He wanted a job that kept him closer to his family. She counseled that he could do both if he was well-organized. He took off and never looked back.

Despite becoming so close she confesses she could never read him until he spoke. He had a poker face and there was never a hint of his inner thoughts. “He was absolutely inscrutable.”

But the book does get us inside the man. Year by year she got to know more of him, and we do learn about the manner of his inner thoughts and private convictions as well as giving us a good look into his family life. There is no scandal in the book as this was a scandal-free White House.

We are unlikely to find now or in the future a more intimate close-up portrait of the Obamas and what makes this very well-put-together couple tick. She makes it clear there are no hidden secrets. With the Obamas what you see is what you get.

Both in Chicago and Washington Jarrett’s passions were equality for women and girls, civil rights, criminal justice, and opportunities for working families. She got a lot done besides being always there for the Obamas. The president valued her counsel. Her political antennae were well trained.

Valerie Jarrett’s next task should be to counsel Michelle to run for president. Michelle comes through the book’s story as an amazing, warm, compassionate, and unusually intelligent woman. If she listens and leans on Jarrett she won’t make many mistakes.