The Silk Roads: An Illustrated New History of the World 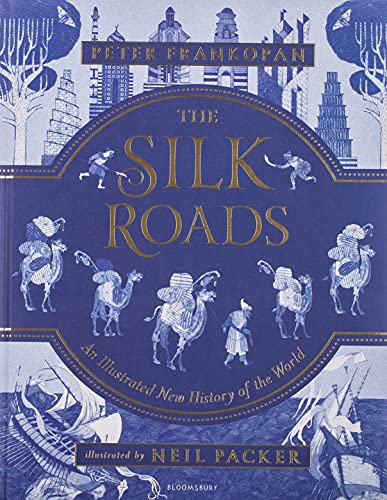 Peter Frankopan is professor of global history at the University of Oxford. Steeped in knowledge of the world’s past he has written this book for his four children. However, it’s not quite a children’s book—despite its beautiful illustrations—but it is suitable for students and young people.

It tells the tale of the Silk Roads in a way that brings it all to life. On the way Frankopan throws in some chapters about Columbus’s voyage to the New World, the Viking advance, the Crusades, the slave trade and 19th century European politics, which don’t really fit in with his main theme.

He writes: “The Silk Roads do not start or have an end point, because they are not actually real roads at all. They are a web of networks that allowed goods, people and ideas, but also disease and violence, to flow east to west and west to east, from the Pacific coasts of China and Russia to the Atlantic coasts of Europe and Africa. . . . You might think the Silk Roads as the world’s central nervous system . . . as veins and arteries pumping oxygen and carbon dioxide away from and towards the heart.”

Some of the places Frankopan writes about are unrecognizable today. Kabul, the capital of war-torn Afghanistan, 500 years ago had gardens that were famous hundreds of miles away. Mosul in Iraq was recently fought over by ISIS, devastating the city. But 1000 years ago it was famous for its magnificent public buildings, bathhouses, and its craftsmen who produced the finest arrows, saddles and stirrups in the world. Baghdad didn’t only become the “capital” of the Silk Road in the eighth century. It became the richest and most populous city on earth—and remained so for centuries. Traders flocked to markets awash with buyers. There was porcelain and stoneware from China. Gold, lead and ornamental pieces were also traded.

Camels and horses carried the loads vast distances. One of the most important commodities was, of course, silk, coming from China. It appealed to the western aristocracy and the rich, and was also used sometimes instead of money. In the Roman Empire silk became a symbol of wealth.

It was a treacherous journey, with always the chance of running into the nomads who had a terrible bloodthirsty reputation. They had to be bought off with silk. At one period in the early 13th century the nomad warriors and their specially bred horses were led by Genghis Khan and his Mongol followers who created an empire from one end of Asia to the other, the biggest empire in the history of the world.

First, they became masters of the Asian steppes in 1206. Next they overwhelmed the Chinese capital, Zhongdu (today’s Beijing). Then came central Asia. Finally, they swarmed like locusts into Russia and into Europe in 1241. Despite their image as cruel stop-at-nothing warriors they were in fact good administrators and tolerant when it came to religion and encouraged trade, making it easier for traders to move safely from west to east and vice versa. Their conquest of such a vast area improved communications from one side of the world to the other.

Religion also spread along the Silk Road: Zoroastrianism, Christianity, and Islam going east and Buddhism going West. Alexander the Great and his army brought the religion of the gods with them from ancient Greece.

Big fortunes were made. One investor did so well shipping goods from India and China he had money to spare to pay for renovations in Mecca.

New products were marketed such as spices used in cooking and medicine. From the 15th century on many of these riches were paid for with gold and silver extracted by the conquistadores in Latin America. This allowed Asian cities to embellish themselves and expand their authority.

Recently China has proposed a new Silk Road. Trade will be facilitated by new roads and railroads. Tariffs will be sharply reduced. State of the art communications will be built. China, for its part, will invest hundreds of billions of dollars. India, its rival in many ways, is standing back watching quizzically what is going on. Maybe it will join the endeavor.

In September 2013 the president of China, Xi Jinping, made a speech in Astana, the capital of Kazakhstan. For more than 2000 years, he said, the people living in the region that connects east with west had coexisted, cooperated, and flourished “despite differences in race, belief and cultural background.” “It was essential,” he went on, “for China to develop friendly cooperative relations with the Central Asian countries.” Then he announced his ambitious plan to create a “Silk Road Economic Belt.” Later it was renamed the Belt and Road Initiative.

It is already making an impact. Billions of dollars are being invested and loaned to build roads, bridges and high-speed trains as well as energy plants, pipelines, deep-water ports and airports right across Asia.

As Frankopan concludes, it is “breathtaking, as is the potential impact on economies in the region and beyond.” The old Silk Roaders, if they were reborn, would be shattered by what they would see, but they would also, after some reflection, understand that it was their legacy that developed the intellectual conviction that made it possible.

Not just children, but people of any age will find this book an absorbing read.