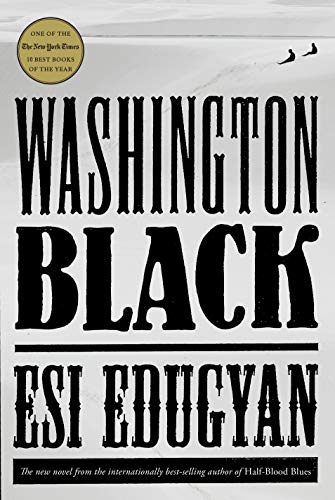 Washington Black made the short list of the Man Booker prize, the British award for books written in English. Many thought it would win, displacing Alice Burns’ The Milkman. Burns writes exceedingly well but Esi Edugyan, born of Ghanaian parents in Canada, is better. She has a more limpid and more colorful style. There is more imagination in her writing and in the end the reader can feel quite intoxicated by her evocative but light language.

Read this: “We slipped from under a canopy of bare branches, and it was then I glimpsed it: the grand, forbidding, illustrious old house, the great manor of Granbourne. I saw its several unlit wings. I saw the ancient scars of weather and wars upon its façade. It was this from which the Wilde men had fled. The pillars and pediments were crumbling, the pavilion choked with moss. I could smell, on the surrounding air, the bitter, offal-like, stench of dead garden beds.”

And toward the end of the book: “As I peered at the glorious white masts, the hull’s dark, polished wood, the wings splaying from either side, I felt again the wet winds from the turquoise sea, the touch of the royal palms leaves in bloom, the fine, dry grass under my heels. I felt the damp of cane toads and leaf-toed geckos in my fists; I smelled the hot rust of machetes in the heat; and a bright pain came into my head then, filling it, so that I grimaced and shut my eyes.”

Much of the book reads like this, line after line, chapter after chapter. How does she do it?  It is copied from no one. It is her own language. Like Ernest Hemingway, Julian Barnes, John Updike, or Graham Greene one can recognize talent from reading a page.

Washington Black is a marvelous tale of slavery, the subjugation of a young boy, Washington Black, his rescue by the brother of the slave owner because of his obvious high intelligence, his participation with the brother, Christopher Wilde, on a wild escapade. “You can call me ‘Titch,’” he said, an earnest man who wanted to free the slaves. He was also a half-mad inventor who had built a homemade balloon that he thought could sail off across the Caribbean to America. He wanted Washington as helpmate and ballast. He stole him away from his brother and off they flew.

“I began to cry—deep, silent, racking sobs, my face turned away from Titch, staring out onto the boundaries of the world. The air grew colder, crept in webs across my skin. All was shadow, red light, storm-fire and frenzy. And up we went into the eye of it, untouched, miraculous.”

Needless to say they crash, but fortunately far away from his brother’s island. They are badly shaken but unhurt, having been caught in the sails of a ship.

From then on it is one adventure after another. Washington is pursued by a professional slave-catcher who can earn a lot of money if he succeeds. The two of them manage to outwit him, but in the end he tracks them down to Labrador in northeast Canada. Then they flee to the Artic.

There Titch takes leave of Washington, disappearing into a snow storm. That is the first half of the book. The second half is Washington’s determined hunt for him, which takes him to London, then Amsterdam, and finally Morocco. In London, by now an accomplished scientist, he meets his true love, Tanna.

Washington Black is a rich, absorbing tale. The denouement comes as a surprise. But by then we have been swept off our feet by this hot air balloon of a novel.