What Hell Is Not 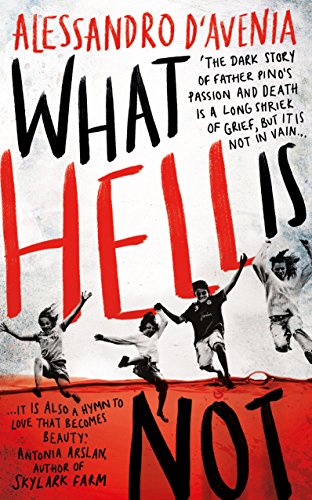 A beautifully written novel, translated from the Italian, with a heartwarming story against a backcloth of misery and degradation, about a priest and a gang of boys and one of the boy’s sister, 16-year old Lucia, in a poor part of Palermo, Sicily, with pot holed streets filled with plastic trash bags.

Much of the poorer part of the city is controlled by the Mafia and their kids who emulate their fathers’ brutal toughness on the school playground and on the streets around the cheap concrete high rises. “The rage of those who learn to dominate before they learn to love, the rage of those who don’t realize that love adds something to life and that hate takes something from it.”

“The novel is the dark story of Father Pine’s passion and death, a long shriek of grief, but it is not in vain. It is also a hymn of love that becomes a beauty,” writes Antonia Arsian, an Italian fellow novelist.

Read this prose: “Lucia smiles with melancholy-speckled eyes. She wishes she believed him. But, she knows, all too well, the limits of the world into which fate has placed her. Being good isn’t enough in this city. Dreams are a luxury afforded only by the books she reads.”

One of the older boys talks to Lucia. “Everybody thinks that life is what’s supposed to make you happy. But I have realized something. All you need is courage to be happy. To embrace the sky and the earth in your heart, you need quite a bit of it. But I also know that courage is somehow inside me, like a seed that is small at first and then becomes a tree with big, strong branches, limbs that can provide shade and safety. It’s capable of being wounded and taking in the seasons. Of dying every winter and budding every spring, summing up its life and death in rings that grow wider and wider as they unite sky and earth.”

Father “Dom” Pino is a small man with big feet and big ears, as one of the seven year olds describe him. He’s made it his job to reach out to these boys and girls and to try and give their lives a purpose.

“There’s no time left yet there are all those kids, just like seeds scattered in a field. The thorns wish to choke them. Hungry crows wish to devour them.”

Father Pino has opened a clubhouse for the kids, the Holy Father Center, “so there would be at least one place where young people could gaze into the eyes of someone who saw the value of their lives.” He has at the center a field, goal posts, nets and lines drawn on the grass. But it needs all his guile to get the boys to come there rather than playing football on the street. After a while they allow him to become their referee, and they learn to respect someone else’s authority.

By now we see that Dom Pino is an unconventional priest in his theology, too. He tells one of the boys who has badly kicked a dog that he must first apologize to God and then to the dog. He does it. “And so now can I go to heaven?” asks the boy. “You don’t go to heaven, Francesco. You are either in heaven or hell. You don’t go there,” says Dom Pino.

“I don’t understand what that means,” says the boy. “Both are inside us. It depends on the peace that we give to the one or the other,” replies the priest.

By building long anecdote upon anecdote we finally arrive at the end of the book with everything you need to know about this neighborhood, its varied inhabitants, its sordidness and its multi-colored scenes of life. On the way, the language soars like a symphony. The notes are in perfect pitch.

An unwashed little girl, hauling her doll beside her, walks on her own along the railroad tracks. When found and asked what she is doing, she replies, “I got lost.”

“Where were you going?”

“Where does he live?”