The Ventriloquists: A Novel 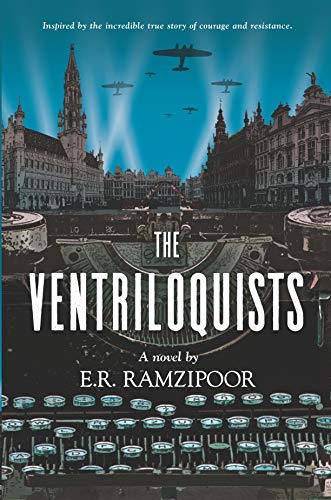 How many tech bloggers writing about cyber crime do you know who can produce a superbly written, eventful, novel on their first attempt? Well, E. R. Ramzipoor has done it. It is historical fiction at its best, based on true events that she unearthed.

The novel is set in the Brussels of 1943 at the time of the Nazi occupation. Marc Aubrion, an idiosyncratic journalist, is fanatically against the Germans. He works in a resistance group called the Front de l’Independance, a secret network publishing dissident underground newspapers.

His genius as a writer—he has a conventional day job—attracts the attention of August Wolff, an intelligent and sophisticated high-ranking Nazi whose job it is to turn public opinion in support of Germany.

Wolff discovers what Aubrion and his colleagues are up to. When they are captured, he gives them a choice: die or work alongside him to produce a newspaper that will paint the allies as monsters.

Aubrion has a clever idea. They will pretend to go along with Wolff but, unbeknown to him, they will also produce a fake edition—Faux Soir—of Belgium’s main newspaper, Le Soir, that will attack Hitler and print reportage that undermines the occupation. They will distribute it in every city street. It’s an amazingly successful venture, selling 60,000 copies, demanding immense energy, conviction, and courage. A high price is paid by this small group of real journalists, and, later, by the owner of the printing plant and his linotypists and printers.

The best writer that Aubrion takes on is a Jewish homosexual, David Speigelman. He has to persuade Wolff that this man is a brilliant necessity. In turn Wolff has to persuade the Jew-hating Himmler, during his visit to Brussels, to tolerate Speigelman for the sake of his rare talents—the journalist “who spun magic with his pen.”

It’s quite a long novel and has room for many subplots. The author knows how to seemingly digress without in fact digressing. This technique helps make it a first-class read. Each diversion loops back to the main story, giving it added impetus.

There are probably many true but unknown war stories out there that could benefit from E. R. Ramzipoor’s unusual talent.