The Great Leveler: Violence and the History of Inequality from the Stone Age to the Twenty-First Century (The Princeton Economic History of the Western World) 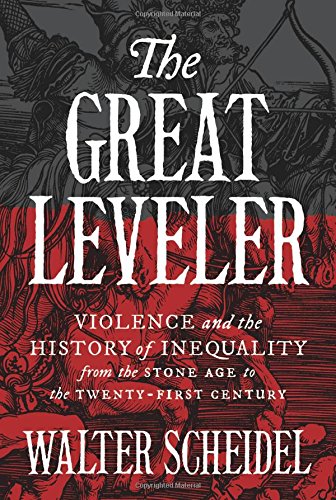 Maybe, after all, there is an argument for saying that the world needs more violence, not less, if we are to make its societies more equal. This is one conclusion one can derive from Walter Scheidel’s new book, The Great Leveler.

He’s a Stanford University professor so one expects a thorough argument, and so it is.

He starts from what we all know by now: the richest 62 persons in the world own as much net wealth as the poorer half of humanity. This is the number that could fit inside a London double-decker bus.

This inequality appears to get worse by the year, although if we go back to 1929 it was then about the same. Two thousand years ago in Roman times the richest had fortunes about 1.5 million times that of the average citizen, roughly the same ratio as Bill Gates and the average American.

Plato, writing in the fourth century BCE, was vexed by the fact “there were not one but two states, the one of the poor, and the other of rich men.” Later, Jesus took up similar themes, as the pope does today. There can be no justification in Christianity, Islam, Buddhism, or Judaism for concentrated personnel wealth and the continuous ill-being of the poor. Any member of these faiths who justifies their wealth is de facto an apostate.

Scheidel’s case is that nothing changes without a great shock. The Black Death was one. It wiped out so many laborers that landlords in order to attract workers had to raise wages quite substantially.

Surprisingly, wars are no great levelers except in specific circumstances. Until the time of the First World War fighting was geographically localized. It didn’t penetrate deep into society. On the other hand, World War II, which involved much of British society, forced the hand of the wealthier classes, and they had to go along with the social reforms, including universal health care, that a Labor government introduced as a “payback” to the rank and file soldiers who had born the brunt of the fighting.

Going back over the centuries, peasant revolts and civil wars contributed little to leveling. Neither did the French Revolution.

The Communist-led land reform in China was an exception. But Mao Zedong’s revolution was overturned by Deng Xiaoping and a great leveling process ended. It had only come into being because of the deep-rooted revolution. It worked best when it was associated with violence or the threat of violence.

So what about non-violent movements? The only sure evidence of achieving leveling without violence is the path most of Latin America took in the early 2000s. But this has been fairly modest in scope. Will it be sustained? In Brazil the legacy of President Lula da Silva of the Workers’ Party is now threatened by the new right-wing president, Jair Bolsonaro. In Mexico, however, the new socialist president is likely to push reform forward.

Today in the post Cold War world we see that unions have been tamed in the US and UK, top tax rates have been raised in some countries, and globalization is hurting ill-trained workers. Inequality is worsening. The Cold War wasn’t a war that penetrated deep into our social institutions.

With the end of communism, Russia, China, and Eastern Europe have all become much more unequal societies; in Russia and China, grossly so.

One hopeful myth should be laid low: By and large the introduction of democracy on its own hasn’t produced more equal societies, although because it has encouraged economic growth it has helped improve the wages, education, health and welfare of the poorer classes.

Does it matter if the world has inequality? It does. Study after study, including those published by the International Monetary Fund and the World Bank, have demonstrated that inequality holds back economic growth.

But what can be done? The era of mass mobilization is over. Very few of us want to see bloody revolutions and the like of Robespierre, Mao, or Guevara. As Thomas Piketty and Steven Pinker have proved in recent books the world is becoming a less violent place. The probability of death from violent causes has been declining for centuries. Ageing societies—Europe, Russia, Japan and China—are likely to become less violent as older people are less tolerant of it or less drawn to it as a political solution.

The answer to this question, writes Scheidel, is not much. In the future “It will be a challenge for the social democracies of continental Europe to maintain and adjust elaborate systems of high taxation and extensive redistribution or for the richest democracies of Asia to preserve their unusually equitable allocation of pretax incomes to stem the rising tide of inequality, which can only grow stronger as globalization and unprecedented demographic transitions add to the pressure.”

Throughout history most attempts to improve income equality have only brought forth sorrow. We should be careful what we wish for, concludes this brilliant professor.