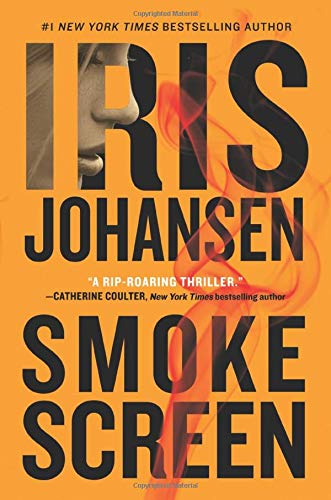 “Smokescreen is a great yarn, well told, easy on the mind, shaped to last the time of a trans-Atlantic flight and to make the journey pass more quickly.”

Iris Johansen is a phenomenon. In her early 80s now, she started writing quite late, as she was approaching 40. Until then she was an airline reservation agent. What a lot was bottled up until then: a vivid imagination, an ability to forge the most unexpected of events in her complex plots, and a formidable sense of pace! Her writing style may be ordinary and straightforward, but she knows how to make a thriller sing. She is unusually prolific, writing over 50 novels in 40 years.

Johansen has been a New York Times bestselling author, and with this book she could well be again. It certainly has all the ingredients for success.

The book is set in Africa, a country called Maldera. It could be Rwanda. There have been massacres and an American Pulitzer Prize-winning journalist has uncovered a village where in the school all the children were murdered. Lording over the country is a president, a very beautiful, bewitching, but totally amoral woman, Zahra Kiyani. In fact, she is not totally alone as dictator. She has a sidekick, hidden in the jungle, who feels he can tell her what to do. Sometimes he gets his way, sometimes he doesn’t. He is a white mercenary, Nils Varak. He is the man who has organized all the genocidal killings.

The journalist, Jill Cassidy, is totally engaged in the uncovering of what happened, and she flies to Los Angeles to solicit the help of Eve Duncan, America’s most talented skull and face reconstructor—a job that enables the police to see a lifelike representation of those who have had their heads battered in by a violent act.

Eve is persuaded to come to Africa to make the dead children “come alive” for their parents to see, and then hopefully they can get closure and begin to heal. In fact the real reason she’s been lured to the country is that Jill hopes she will settle the question, following a helicopter crash, whether Varak is still alive. If he is a CIA team wants to eradicate him. And Jill wants the scoop of the year.

Violence surrounds the two women all the time. You sense their fear, you are drawn into their bravery, you are afraid for their lives. Most readers’ emotions are likely to become totally absorbed in whether these two will escape from their predicament unscathed. Both women, when they understand that what they are unearthing is personally threatening, could drive to the airport and take the next plane out. They don’t.

Smokescreen is a great yarn, well told, easy on the mind, shaped to last the time of a trans-Atlantic flight and to make the journey pass more quickly.