Surrogate Warfare: The Transformation of War in the Twenty-First Century 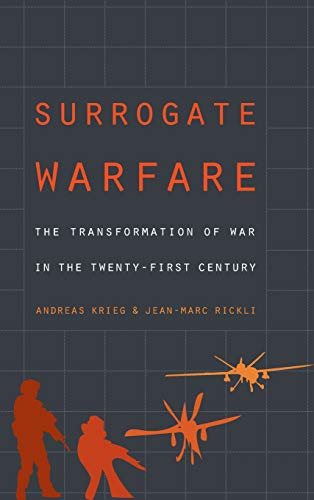 “Surrogate Warfare is a well-researched and thorough study of surrogate warfare. If you are interested in the intricacies of modern warfare and its fast evolution then this is a good book . . .”

Surrogate Warfare is an exhaustive study. Its focus is the use of surrogates in war. Readers might well think of a few mercenaries in African wars as happened in the Congo in the 1960s; they were usually white ex-soldiers from South Africa and Rhodesia who had fighting in their blood stream and liked the high financial rewards.

But it is a much broader phenomenon that that, practiced by countries as diverse as Iran, the US, Russia, the small Gulf states, the United Arab Emirates (UAE), and Pakistan. The UAE has even imported 1,800 mercenaries (contractors is the modern name) from the other side of the world, Latin America, to do its dirty deeds in the Yemen war. Most famously the British used T. E. Lawrence (Lawrence of Arabia) to marshal the Arab tribes against the Ottoman armies during World War I.

The common notion of war is that it is fought en masse by the people of one side against the other, as in World War II. But the reality today is that states are increasingly willing to franchise their fighting power to non-state soldiers—it’s cheaper and more easily deniable.

Another part of surrogate war, which President Obama deployed on a wide scale, is the use of drones, which put US soldiers and airmen out of harm’s way and could be directed more accurately on non-civilian targets. Another part is cyber warfare. Another is the deft misuse of social media. All these don’t rouse public opposition as much as it does when a country goes to war in the age-old conventional style.

The state then becomes, as Krieg and Rickli put it, “a mere manager of violence.” It can also backfire, as it did in Afghanistan when first the Soviet Union and then the US supported the mujahedeen to do a good part of their fighting. And it also lowers the threshold for going to war. When it is totally clandestine as with the CIA and MI6 it becomes very difficult for parliamentarians to have any restraining role. They are often not kept informed.

Iran has turned the use of surrogates into an art form. “Iran is probably the most experienced patron in the late twentieth and early twenty-first centuries to conduct warfare by surrogate.” The most notorious of its surrogates is the Quds Force. Iran’s government has also supported Hamas and Hezbollah in their fighting in Palestine and Lebanon respectively, and militias in Iraq and Yemen (although the latter intervention is exaggerated by the US, UK and France as a way of painting Iran black and justifying arms sales to Saudi Arabia and the UAE).

Surrogate Warfare is a well-researched and thorough study of surrogate warfare. If you are interested in the intricacies of modern warfare and its fast evolution then this is a good book for you, even though it is rather densely written.