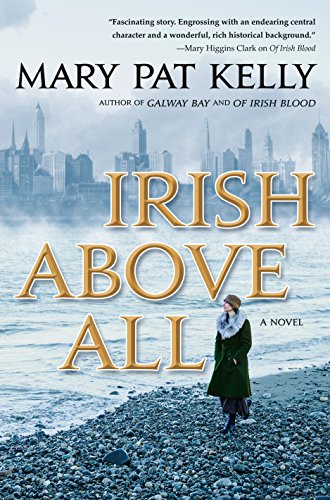 “Irish Above All is a likeable book, nicely written and carefully paced—just a bit too long.”

After 508 pages you come to the novel’s last line: “Thank you, God. We are Irish above All.”

This is another very Irish novel by the prolific Mary Pat Kelly, who has been named one of the top 100 Irish-Americans. This is her third Irish novel. This time it revolves around the Irish community in Chicago, beginning in the 1920s, moving through the Great Recession and ending with the election of John F. Kennedy, a first for an Irish American and a Catholic who, by the way, won the presidency by fiddling the vote in Chicago.

It’s often said that the Irish have the gift of the blarney. This means they can talk until the cows come home or, to use another Gaelic expression, talk the hind leg off a donkey. This novel also has a bit of the blarney. It’s a long story, a good story but perhaps too stretched out for many readers.

It revolves around Nora who after a broken romance escaped to France where she became a successful photographer for Mademoiselle Photographie, rubbing shoulders with Paris’s artists and writers. She returns to Chicago ten years later after she’s been told that her brother’s wife is dying. At first she stays with Ed, a cousin. He helps her get going with her photography. It’s a harder life than in Paris as the consensus among newspaper and magazine editors seems to be that nice girls don’t work as photojournalists. She has many amusing but telling run-ins with her male competitors. She always comes out on top.

Ed is a l-o-v-e-l-y man, as the Irish would say, who wins the election for mayor, having run the department that built the waterfront park that to this day is one of the great features of the city. The book succeeds in intimate portraits of Chicago life and its politically well connected. Before very long you understand the shenanigans (another Irish word) of Chicago politics. Ed, a Democrat idealist, has to struggle against a malevolent Republican Party that seeks to wrong foot him at every opportunity. Not much different from how it was during the presidency of Barack Obama.  But his visionary urban planning, his educational policies and, by the standards of the time, his avant-garde attitude to Negroes, makes progress. “No longer just the City of the Big Shoulders- Freight Handler to the Nation, but a gracious city with attractions that would both entertain and educate its citizens, and bring in tourists.” For much of the story, one way or another, Nora is at his side with a front row seat. She even finds a new wife for Ed who had become a widower at a young age.

Irish Above All is a likeable book, nicely written and carefully paced—just a bit too long. As the British often tell the Irish, “cut the blarney.”