Death Is Hard Work: A Novel 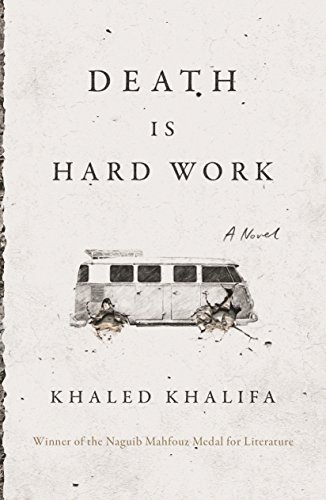 “Death Is Hard Work is a short book, but one learns more detail of the life of war than from a hundred newspaper and TV reports. By its end the pages smell of death.”

This is one story of the Syrian civil war, an old man who dies in the city of Damascus and the determination of his son, Bolbol, to bury him far away in his home village.

But it also reminds us of the time before the war. The old man, Abdel Latif, in his 70th year was married to a 60-year-old woman yet they still “chased through meadows after butterflies and wrote each other love letters as if they were separated by a great distance.” Before the horror of war there was another time.

Death is omnipresent. “It was a terrible flood drowning everyone.” Bolbol recalls the days when the regime still bothered to put effort into funerals it staged for its fallen. “On television a female anchor would announce the name, function and rank of the martyr, and this would be followed by a shot of the family declaring how proud they were, how glorious it was, that their son had been martyred. And yet, after several months, the band, the bouquets and the flags disappeared; so did the female anchors crowing about the penniless boys martyred for their loyalty to the nation and their Leader, and so did all reverence for the word martyr.”

The people of Syria have been incredibly brave: “Despite starvation, everyone still clung to hope and spoke optimistically about the days to come. They realized that despair meant drowning in the abyss, so kept faith with the confidence that was the only possession they had left.”

Nevertheless, “Everyone had begun to speak of their fear openly. Anyone who had been confident of a victory a year ago before had begun to feel powerless and weak, increasingly vulnerable, even in mortal peril. Since he was incapable of close observation of anyone else, Bolbol kept an eye on himself, only to discover that he was the most craven of all.”

This is the background for the novel’s story. Bolbol can’t be dissuaded by his brother and sister from making the perilous journey across the country to the village cemetery. “As a general rule corpses don’t much care about where they are buried,” but Bolbol is determined to carry out his father’s last wish even if it cost him his and his siblings’ lives. His sister recalls all the idiotic things he had done over the years. For his part he affects to be careless about his life, as he imagined a brave man might.

Why the siblings go along with him is to be wondered at. They think it was a daft idea but they don’t want to appear to be disloyal. Bolbol reciprocates the favor by not talking to them except when absolutely necessary and privately looking forward to when the funeral would be over and he could avoid their company in the future. He isn’t going to try to take advantage of the many days of the journey to try and renew the family ties. He is fundamentally a flawed and selfish character carrying out one “good deed,” after which he can relax back into his crass ways.

Still, it’s only his determination that gets them to their destination. They travel from one roadblock to another, across innumerable borders set up by the various factions. Each crossing produces a story in itself. Dust and dirt and the stench of the body waft across the van. The ice melts. They become close to despair.

Death Is Hard Work is a short book, but one learns more detail of the life of war than from a hundred newspaper and TV reports. By its end the pages smell of death.

The politics of the war are ignored. It is a personal story on which the war sometimes intrudes, sometimes retreats across the fields or into the mountains. The fighters are blank, faceless, men. With this technique the author coaches into reality the tragedy of one lower middle-class family. The story is introverted like its characters. Yet at the same time it will produce extroverted thoughts among the readers. They will be transported out of their armchairs or subway seats—wherever they read—into a Syrian world that would be unfathomable without writing such as this.

This book must be read. Not just because there is no other serious novel that has come out of the war but because it is a first-class piece of literature.