The Island of Sea Women: A Novel 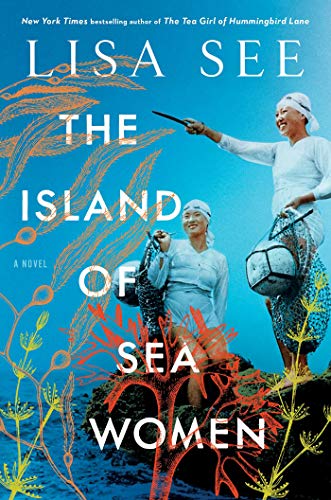 Cast yourselves backward 75 years ago into an almost unknown South Korean island, Jeju, invaded by brutal Japanese troops, liberated by US forces, and turned over to the then un-unified regime in Korea whose soldiers raped and tortured protestors right under American eyes.

Then you have the setting for this unusual and unsettling story written by Lisa See, who is American Chinese, about female divers who earn their living by diving deep, holding their breaths for up to five minutes, while they fish. The prized catches are abalone and giant octopuses. At one point in the story one grabs one of the girls and tries to drag her down. The other women hack at its long tentacles and its head until dead and releases the half-drowned girl. It takes the unconscious girl, hovering between death and life, a week to get back on her feet.

The young girls, their mothers, and grandmothers keep the family finances in the black while their husbands find low-paying work on shore.

No one can understand quite how they do it. An American research team comes to study them. They are mystified by their endurance, often in ice-cold water, because they are seasonal migrants to the north, to wintry Vladivostok on the eastern seaboard of Russia, where wages are much higher. While diving their body temperatures fall to almost unbelievable levels, recorded nowhere else on earth.

“Every woman who enters the sea carries a coffin on her back.” says the chief diver. “In this world, in the undersea world, we know the burdens of a hard life. We are crossing between life and death every day."

Nevertheless, the women enjoy their work: the special sensations from the ever-colder water as they dive deep, the success of their fishing, and the thrill of going back up to the light and the surface hauling a heavy catch.

This art—and it is a kind of art—is now no longer practiced. It is part of history. Modern life with urban employment in high economic growth South Korea has taken over.

All this is true, and this is the canvas on which this unusual and often gripping novel is painted. Besides the story of the sea and fishing, there is the tale of the friendship of two young fisherwomen who have known each other since girlhood, Mi-ja and Young-sook. When Young-sook’s mother died her friend is by her side for days. After her death Young-sook never wants to dive again, but in the end she has no choice but to travel to Vladivostok to keep the family fed and clothed. She and Mi-ja sign up for five long years.

Both girls badly want a husband, but the Russian boys who flirted with them and bought them ice creams are rejected. They are too far away from home.

Eventually at home the girls find husbands, thanks to arranged marriages. Sadly for them their spouses live far away in different parts of the island. There are no buses, just horse and cart and the distance between them is too far. Mi-ja marries a wealthy businessman—a horrid man. “His violence and cruelty are the way of the island, these days.” Young-sook marries a poor but warm and kind man. The interaction between these four is well but painfully told. Young-sook decides to go back to fishing to pay for her husband to study and become a teacher.

Then the war arrives on their doorstep. It is horrific and the people get sandwiched between the opposing forces, the Japanese and the Americans. The story becomes bitter and reads like an endless atrocity.

The war ends, and tourists arrive to explore the pretty, mountainous island. The tourist authorities advertise the women as the “Sirens of the Deep and the Mermaids of Asia.”

This review just gives the barest summary of a long story. There is much more to the plot than what is given here.

The novel movingly contains the stories of happy achievement at sea and the regular sorrow on shore. The contrast is vividly told. So is the horror of war and the Japanese occupation. The Sea Women kept fishing.