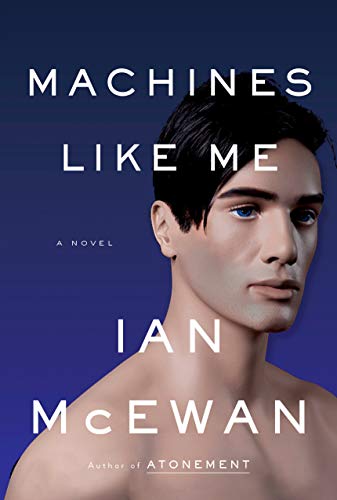 Machines Like Me is the result of very special literary brain, the master of all he turns his writing to, fantasying deep into our imagination, a novelist with the ability to turn complex science or strange events into gripping and elegant prose. Like the best of novelists he knows how to penetrate right inside the makeup of a human being. Every character, however unusual, becomes believable in his deft hands. This is Ian McEwan, one of Britain’s greatest, and winner of the country’s top literary award, the Booker Prize.

The novel takes place in 1980s London. Leading characters such as Margaret Thatcher and her opponent, Tony Benn, have swapped places. The Falklands war, when the British set out to drive the invading Argentinians off the islands, ends with an Argentinian victory, not a British one, as actually happened. None of this historical mix-up really matters. The story is rather weird so why shouldn’t the history be, too?

Charlie is an educated drifter, adept with sophisticated computer-driven machines but unable to find satisfying work apart from making the bare minimum to survive with the stock market. His housemate in the apartment above is a 23 year old, dark haired, beautiful girl, Miranda. They later fall in love.

Charlie has inherited a good dollop of money and instead of buying a house, which he knows he should, he buys a robot, configured so well that some can’t tell it apart from a human being. It can do everything, from cleaning the house, to shopping, to winning consistently on the stock market, to analyzing Shakespeare’s sources and solving criminal cases. It can even make love, as Miranda discovers, to Charlie’s anger. They both become attached to it.

The big question that faces them after Miranda’s best friend is raped by a fellow school student and the robot pushes himself forward into dealing with the fall-out, is whether a machine can truly understand the human heart. Adam has a good try at it but ultimately fails. His maker, a famous scientist, later admits to Charlie that the robot and the other sibling robots he made, “couldn’t understand us because we couldn’t understand ourselves. Their learning programs couldn’t accommodate us. If we didn’t know our own minds, how could we design theirs and expect them to be happy alongside us?” He adds, as an academic is wont to do: “But that’s just my hypothesis.”

Having created this amazing thing its inventor, Charlie, and Miranda realize they are smaller intellectually than it. Adam’s intellectual evolution is moving forward so fast and manipulating knowledge so effortlessly that he can outpace any thought a human being can have—with the caveat that it will never be able to plumb the depths of the human heart or soul.

The novel works at many levels, the story, the science (McEwan has mastered a lot of the difficult stuff), and the seemingly effortlessly way the master writer rolls out his prose. Every sentence is well chosen and has perfect form. Every twist in the tale—there are many—is tuned taut for maximum effect.

But we are also perhaps overawed—as Artificial Intelligence seems to be advancing so fast—by thoughts of its implications. Is this robot Adam the way it might go? It seems plausible that it might well. After all, 18 years ago an early computer beat chess grandmaster, Garry Kasparov, one of the world’s most brilliant minds. Since then computer technology has soared into the stratosphere.

When Adam does arrive on our doorstep—as early, fairly primitive, versions already have—we will be left with the one thing that only the human being can do: live out our complex emotions, the feelings of the heart, the aches of the soul and the morality and immorality that accompanies all these things. The rest of life, if we choose, can be left to him and his siblings. With this novel Ian McEwan opens our eyes to a future for human beings when that is a real possibility—an insufficient and horrifying prospect.