Blaming Immigrants: Nationalism and the Economics of Global Movement 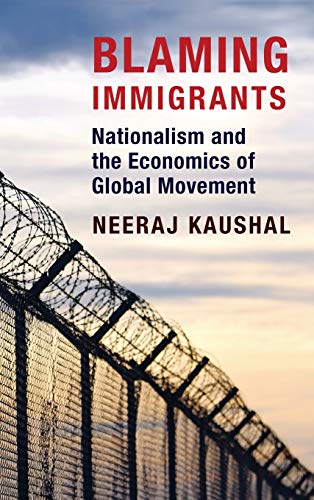 “A wall cannot be built to stop immigration. We have to learn to make the best of it.”

It’s well overdue that the misleading myths on immigration are thrown into the trashcan. The fact is that President Donald Trump’s own government research shows that Mexican migration has dropped sharply in recent years. In Britain, the Brexit debate which began with a whipped up crisis about immigration has now moved to a level where it’s tearing the country apart. In France and Belgium immigrants are falsely blamed for Islamic terrorism. In Sweden and Denmark they push traditionally left of center electorates rightward.

A new book on the subject, Blaming Immigrants, by University of Columbia professor, Neeraj Kaushal, says it all. It pulls together most of the research so far done.

Immigration is one of the most divisive issues of our times. Yet the increase in immigration globally is largely in line with the growth in world population. It was 3% in 1990 and in 2015 also 3%.

It needn’t be so divisive given good political, religious, and media leadership. In the US the focus is on the wall. There are far fewer reports about positive developments in some cities. In New York, where 36% are foreign born, the city provides ID cards for illegal migrants. There’s free health insurance for the children of illegals. Public universities provide tuition subsidies for illegals—as happens in 22 other states. In Florida, Miami has the world’s highest proportion of foreign-born residents, yet it has had no immigration crisis.

Our media don’t highlight the good side of things. How many people are aware that in the last presidential election the counties bordering Mexico and most affected by Mexican immigration voted for Hillary Clinton over Donald Trump? In Austria the inflow of Syrian refugees weakened the political support for the large far-right movement. We need to know why this is so if anti-immigrant forces are to be defeated.

Turkey is one of the most hospitable of all countries. A survey carried out at the peak of the Syrian refugee crisis found that 73% of respondents believe that accepting and supporting refugees is a humanitarian mission. Canada welcomes immigrants and refugees, both skilled and unskilled.

There are many things we don’t understand about the public reaction to and the cost/benefits of immigration, but some important aspects have been researched in depth:

There’s still much to be done to make immigration more palatable: an end to policies that stress multiculturalism at the expense of integration, which has led to ghettoization, which increases crime and degrades schools, and job retraining for locals so that immigrants don’t leap over the heads of unemployed locals.

A wall cannot be built to stop immigration. We have to learn to make the best of it.