The Capital: A Novel 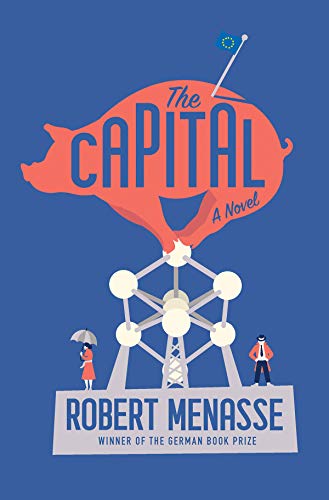 To write a novel about the turgid, bureaucratic goings on in the headquarters of the European Union—the so-called Commission, based in Brussels—is as difficult a subject as one can choose. Menasse has a good stab at it. It is a wry tale.

Menasse is an Austrian who won the German Book Prize for this book. According to the publisher, Menasse moved to Brussels for four years to write—“a wine-soaked tour of supranational institutions.”

At the heart of the cast of characters is Fenia Xenapoulou, aka Xeno, a Greek Cypriot, recently “promoted” against her will, to what is considered a deadend job in the department of culture. She and a colleague decide to make a splash, revamping the Commission’s dull image by proclaiming Auschwitz, not Rome or Paris, where the founding treaties were signed, as the EU’s birthplace. It is soon to be the EU’s Jubilee and what better way to mark it than by holding the 50th anniversary festivities on the site of the concentration camp.

Xeno should have been a high flier. She studied economics at LSE in London and did her post grad at Stanford. She is divorced and has no family distractions. She is idealistic and thinks the EU is the best antidote to another European war—hence the importance of Auschwitz to her. But alongside that feeling “she feels she is in a lift that had gone up but had got stuck, unnoticed, between two floors.” This project is going to resuscitate her Commission life and be a means of allowing her talents flourish. Then afterward she would be transferred to a job that would make use of all her talents.

Martin, her sidekick, is given two weeks to come up with a plan. The author, as happens unfortunately time and time again, then goes off into a digression, writing of Martin’s irrelevant personal family life. It ends up with his brother, a farmer, lecturing him over dinner in a posh restaurant which, as is often the case in Brussels, serves divine food, on the EU’s harmful policies on pig production.

The next day Martin is in the office giving his vigorous opinions about Auschwitz. He explains to the others that Auschwitz had been an ultra European event. “Nothing in history has brought together the diverse identities, mentalities and cultures of Europe, the religions, the different so-called races, and former hostile ideologies, nothing has created such a fundamental solidarity of all people as did the experience of Auschwitz.”

The meeting gives birth to a great idea: to find the remaining survivors of the concentration camp. There is a steady undercurrent of spoof-making at this point that gathers speed as the story unfolds. How do we find out how many survivors there are? Is it twenty or twelve or zero? “We have a European statistics authority. They’ve got stats on everything. They know how many eggs were laid in Europe today.” The statistical analysis which follows is indeed funny. So is the long telling of how so many countries, including Germany and Poland, oppose this grand plan for the Jubilee. “Why the Jews? Why not sport?” is the Polish reaction.

And so it goes on with many twists and turns with the small team being challenged by the big guns at the top of the Commission who don’t like the idea but don’t let on. One of the team’s advisors, a professor, refusing to lose heart, tries to raise the ante and suggests the whole of the EU headquarters move, lock, stock and barrel to Auschwitz.

The book is broadly ironic in light of the hard shift to the xenophobic right in a number of European countries, including a rise in anti-Semitism. To the extent the book ignores this one should consider insensitive to the times in which we currently live.

Many pages and ups and downs later we come to the end of the novel with another inexplicable digression. Since the novel began with a pig on the run—pigs again!—being chased through the streets in the heart of Brussels, which is totally irrelevant to the plot of the book, one should not be surprised. The digressions spoil a reasonably good novel.