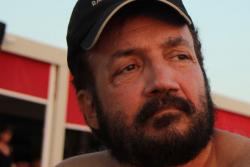 George De Stefano is journalist, author, and critic who has written extensively on culture and politics. His work has appeared in such publications as The Nation, Film Comment, Newsday, Gay City News, The Advocate, Cineaste, In These Times, and The Italian American Review. He is also a contributor to the Web publications PopMatters, Rootsworld, The Examiner, and I-Italy.

Mr. De Stefano’s book An Offer We Can’t Refuse: The Mafia in the Mind of America (Faber and Faber, 2007) explores some of his longstanding preoccupations as a writer: cultural mythologies and their social impact; ethnic identity and stereotypes; popular culture, especially film; and how such social categories as race, class, sexuality, and gender interact in American society.

He has contributed essays to other books, including Our Naked Lives (Bordighera Press, 2013), The Essential Sopranos Reader (University of Kentucky Presses, 2011), and Mafia Movies: A Reader (University of Toronto, 2011). He is a contributor to The Routledge History of the Italian Americans (Routledge; 2017).

Mr. De Stefano also has written about the AIDS pandemic, Latin American literature, gay rights issues, Italian cinema, and music (Afro-Cuban, African, jazz, blues, and gospel, and “world music”). Mr. De Stefano is deeply interested in food—its cultural and social significance, production and distribution, and the critical importance of preserving biodiversity in agriculture. The Slow Food movement, which began in Italy as a protest against corporate “fast food,” fascinates and inspires him.

He is researching a new book about the history of Italians in New Orleans to be titled Gumbo Italiano: How the Sicilians Made New Orleans. He also is pursuing opportunities in feature writing, commentary, and cultural criticism. He is a member of the National Book Critics Circle, the Authors Guild, and the National Association of Independent Writers and Editors. He can be reached through his website.

An Offer We Can't Refuse: The Mafia in the Mind of America

Witness to Revolution: The Advocate Reports on Gay and Lesbian Politics, 1967 - 1999

"Autobiography is unmistakably the work of the singer and lyricist of the still-beloved band The Smiths."

A Colossal Wreck: A Road Trip Through Political Scandal, Corruption, And American Culture

“We—mainstream society—cannot afford to ignore their needs and potential contributions.”

Among the Bloodpeople: Politics and Flesh

“. . . a fearless truth-teller whose essays in Among the Bloodpeople are fully, unhesitatingly engaged . . .”

Story of My People

André Aciman is a poet of exile, a chronicler of displacement and its discontents.

The Story of My Purity: A Novel

“The Story of My Purity is a frustrating novel—entertaining enough . . . yet ultimately unconvincing.”

The Honored Society: A Portrait of Italy's Most Powerful Mafia

“Most of The Honored Society isn’t about ’Ndrangheta at all. Ms. Reski didn’t have enough material for a full-length exposé . . .”

How To Be Gay

“Mr. Halperin’s answer: . . . the lessening of overt discrimination and exclusion has come at a price. Gays have become too like heterosexuals: conventional and boring.”

The Godfather Effect: Changing Hollywood, America, and Me

“. . . despite its failings, The Godfather Effect is generally engaging.

“‘Heterosexuality is historically constituted,’ she concludes, ‘and for now we believe in it. And this, too, shall pass.’”

“All the elements that fans of the Inspector Montalbano series have come to expect are present in The Potter’s Field: a brutal crime that challenges Montalbano and his team, sharpl

Keep On Pushing: Black Power Music from Blues to Hip-Hop

“Keep On Pushing celebrates the musical and activist legacy of the 60s and laments the current era, in which ‘there exists no one effective organized mass movement of people, march

Thoughts Without Cigarettes: A Memoir

“When he was only five years old, the Cuban-American writer Oscar Hijuelos lost the Spanish language, and with it his sense of himself as Cuban.

Why Pamper Lifes Complexities?: Essays on The Smiths (Music and Society)

The Smiths, a rock quartet from Manchester, England, lasted only five years, from 1982 to their acrimonious breakup in 1987. But the band’s popularity hardly ended with their demise.

The inside cover flap of Life, the much-anticipated memoir by Keith Richards, carries a note, in Richards’ handwriting: “This is the Life.

Edmund White, who will turn 70 in 2010, is the grand old man of American gay literature.

The Pope Is Not Gay!

On May 13, 2010, during the annual Mass at Fatima’s sanctuary in Portugal, Pope Benedict XVI delivered yet another of his orations on the evils of homosexuality, and the impermissibility of grantin

A Freewheelin' Time: A Memoir of Greenwich Village in the Sixties

Suze Rotolo, the daughter of Italian communists who immigrated to New York, grew up in Queens but soon found herself in the bohemian milieu of Greenwich Village.

The Plot Against America

What if Franklin Delano Roosevelt, instead of winning a third term as president, had been defeated by the Republican candidate Charles Lindbergh, the celebrated aviator and “America First” isolatio

Readers be warned: this review of Bryan Batt’s She Ain’t Heavy, She’s My Mother, will violate the first rule of book reviewing laid down by John Updike: “Try to understand what the author

Orange Sunshine: The Brotherhood of Eternal Love and Its Quest to Spread Peace, Love, and Acid to the World

You might think there aren’t any more good stories left to be told about the sixties.

about the same: selling people a good time they desperately wanted.”

When they literally were “just kids,” Patti Smith, poet and rock star, and Robert Mapplethorpe, photographer and sexual provocateur, showed signs of the artists they would eventually become.

Not too many autobiographies begin with the author sliding down the birth canal.

Last Call: The Rise and Fall of Prohibition

From January 1920 to December 1933, Americans were forbidden by law to manufacture, possess, or distribute alcoholic beverages.

Wilbert Rideau, a black man unjustly sentenced to death when he was nineteen for having killed a white woman in a botched bank robbery in 1961, spent 44 years in Louisiana prisons, the most notorio