Why Pamper Lifes Complexities?: Essays on The Smiths (Music and Society) 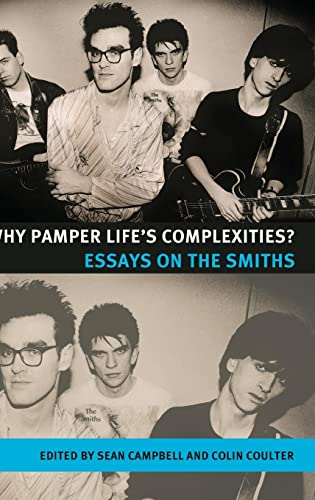 The Smiths, a rock quartet from Manchester, England, lasted only five years, from 1982 to their acrimonious breakup in 1987. But the band’s popularity hardly ended with their demise.

After a period in the 1990s when they—and most guitar-driven rock bands—became unfashionable, they were re-discovered, and re-evaluated. The reassessment reached its apogee in 2002, when the leading pop music paper New Musical Express (NME) voted them the most important British band ever. A new generation of indie rock bands has claimed them as a major influence, and even Lady Gaga sings their praises.

As the introduction to Why Pamper Life’s Complexities?, a new collection of critical essays, notes, The Smiths are now “deeply fashionable—even more so perhaps than in their 1980s heyday.” The book, edited by two self-proclaimed fans, Sean Campbell, an English and Media professor at Cambridge, and Colin Coulter, a sociologist at the National University of Ireland, comprises thirteen essays that analyze the band’s “lasting cultural legacy.”

Although The Smiths never achieved mega-stardom, they were hugely popular in the U.K., where each of their four studio albums reached the top of the pop charts. In America and elsewhere, they were a cult band beloved by critics and by an uncommonly ardent fan base. Their best-known song probably is the shimmering “How Soon Is Now?” a pop masterpiece later used as the theme song of the television series “Charmed.”

The Smiths still matter—and not only to their original followers. When producer Mark Ronson in 2009 released a disco remake of one of their 80s hits, he received death threats from Smithies outraged that he had dared to tamper with their heroes’ work.

Do The Smiths deserve such devotion? The NME’s coronation of them as the kings of British rock is definitely over the top. Better than the Beatles and the Stones? Not hardly. But The Smiths were a distinctive band that sounded like no one else that came before them. Their best work holds up remarkably well nearly a quarter-century after their breakup.

Founded by guitarist Johnny Marr and vocalist and lyricist Steven Patrick Morrissey, The Smiths also included bassist Andy Rourke and drummer Mike Joyce. Marr, who wrote and arranged the music and produced the records, worked a lyrical yet incisively rhythmic style that drew on rockabilly, R&B, jazz, English folk music, punk, and West African highlife. You could call him the Keith Richards of his generation. Like Richards, the Smiths guitarist blended lead and rhythm, and eschewed the self-indulgent and tedious soloing of Clapton, Page, and their similarly long-winded imitators. The songs were the thing, and Marr always found the right riff or melodic phrase to make them memorable.

But the band’s dominant figure, the cynosure of most of the adoration, as well as the hostility they attracted, was the vocalist. Morrissey, as he called himself, was a sui generis rock star. His was an unmistakably English voice, with clear diction and at times posh intonation; there was nothing of the blues or any other African American idiom in his singing. He crooned, he droned, he yelped, and at times he evoked the microtonal vocalizing of Indian and Arabic music.

But Morrissey’s uniqueness wasn’t just a matter of singing style. During the 80s he delighted in making outrageously provocative public statements. (He still does today, as a middle-aged solo artist.) Morrissey particularly loathed then-Prime Minister Margaret Thatcher. He said he’d welcome her assassination, and when she survived an actual attempt on her life, he expressed his disappointment in the media. He wanted to title the band’s third album “Margaret on the guillotine,” but record company execs put a stop to that. His other targets included the monarchy, meat-eating, machismo, and inherited privilege. He championed vegetarianism, socialism, and republicanism, as well as the working class victims of Thatcherism.

As Joseph Brooker observes in his contribution to Why Pamper Life’s Complexities?, Morrissey and The Smiths “represented one of the most radical political voices of a deeply polarized era.”

Morrissey also had a finely honed camp sensibility, and he has written some of the wittiest lyrics in rock. He identified with Oscar Wilde, whose epigrammatic brilliance and flamboyant public image he took as models for his art and public persona. Morrissey, like Wilde, was Anglo-Irish; and like the persecuted writer, he was homosexual. But, also like his idol, Morrissey never explicitly proclaimed his sexuality. He even, for a while, claimed to be celibate. But the evidence was there, in the band’s cover art, which Morrissey selected (the first album featured a nude photo of Warhol “superstar” Joe Dallesandro) and especially in his lyrics.

In response to an interviewer’s question about his sexuality, Morrissey replied, “It’s all there in the lyrics.” Indeed. How many straight rock stars sang odes to “this charming man” or implored a lover to “Shove me on the patio/I'll take it slowly”?

The essays in Why Pamper Life’s Complexities? cover a broad range of topics: The Smiths’ Irishness (all four of these English rockers were children of Irish Catholic immigrants); their ambivalent relationship to their hometown, Manchester; politics; social class; religion; the influence of 1960s British “kitchen sink” films on Morrissey’s lyrics and the band’s iconography; race, and sexuality. The contributions vary in quality, and some, such as Fergus Campbell’s piece on conflicts between academics and journalists over who “owns” pop music criticism, and Julian Stringer’s ruminations on “what The Smiths mean to Manchester,” are of narrow interest.

The best pieces, though, represent pop music criticism of a very high order, erudite yet (mostly) free of academic jargon. Joseph Brooker’s analysis of the band’s radical politics, “’Has the world changed or have I changed’: The Smiths and the Challenge of Thatcherism,” is outstanding, as is Colin Coulter’s “’A double bed and a stalwart lover for sure’: The Smiths, the death of pop, and the not so hidden injuries of class.” (Every essay in the book is titled this way, with either a direct quote or a paraphrase from a Smiths song, followed by an academically-correct subtitle.) Mr. Coulter offers some acutely insightful commentary on how The Smiths’ songs “represent in part an endeavor to critique and resist the atomized and instrumental vision of society that Thatcher sought to inflict.”

Amid all the sociology and lit-crit in Why Pamper Life’s Complexities?, Jonathan Hiam’s “’This way and that way’: Toward a musical poetics of The Smiths,” stands out as the only essay that analyzes The Smiths’ music qua music. Hiam explicates the “structural interplay” between the band’s sound and Morrissey’s words, treating both as equals, in order to “tease out a genuine musical poetics.” Focusing on three of the band’s songs, Hiam discusses them in formal terms (song structure, harmony, metrical patterns) without becoming overly technical. His musicology—sophisticated yet accessible to non-specialist readers—makes a convincing case for “the richness of The Smiths’ songs as musical compositions.”

The most disappointing aspect of Why Pamper Life’s Complexities?, at least for this reviewer, is the book’s failure to come to grips with Morrissey’s sexuality as it informed The Smiths’ music and imagery, and their relationship with their fans. The one contributor who does focus on sexuality, Sheila Whiteley, does so in the context of child abuse and pedophilia, because some of the band’s conservative British critics, misinterpreting Morrissey’s lyrics, irresponsibly and outrageously accused him of celebrating sexual contact with minors. Whiteley condemns the conflation of homosexuality and pedophilia. But by discussing Morrissey’s lyrics in this light, she misses an opportunity to say anything really interesting about his sexuality, his relationship to gay culture, and to his large gay following. (When I saw the band in New York, the audience comprised mainly punk rockers in their 20s, teenagers, and gay men.)

The fact is, homosexuality was from the start inextricable from The Smiths’ image and music. Stephen Holden, an openly gay critic with the New York Times and an early fan of the band, noted the candid same-sex eroticism in his enthusiastic review of their debut album. The British rock journalist Jon Savage commented that the lyrics of “How Soon is Now?” were evocative of the Manchester gay club scene of the mid-80s.

But the band’s relationship to homosexuality was complex. The Smiths certainly were not gay rights crusaders. While on tour in the U.S., they even declined to give interviews to the gay press. That attitude should be understood in the context of the era in which the band emerged. In the 80s, gayness and gender-bending was beginning to become overt in British pop. There were the bands Frankie Goes to Hollywood, Bronski Beat, and Culture Club, all led by gay singers, and also Queen, with its flamboyant gay front man Freddie Mercury.

A few years earlier, Elton John had declared his “bisexuality” in a Rolling Stone interview. But the general cultural environment was far more hostile than now. It was risky for pop stars to come out, as the backlash Elton John faced after his announcement made all too evident. In that climate, it’s not surprising that The Smiths were reluctant to be seen as a gay band. (And, in fact, it appears only Morrissey was non-heterosexual.) It’s too bad the editors of Why Pamper Life’s Complexities? didn’t enlist an insightful gay critic, or even a savvy straight one, to unpack all of this.

The Smiths may no longer exist as a functioning band, but that’s not to say they’ve been forgotten. As noted earlier, they’re held in high esteem by contemporary rock and pop artists. Their fans crave a reunion, and in 2006, the organizers of the Coachella rock festival offered them $5 million to reunite for a single concert. Morrissey promptly rejected the offer. He continues to pursue a generally successful, if artistically erratic, solo career. His former compere Johnny Marr has embarked on a variety of projects, none of them as compelling as his former band.

Marr, however, did make waves in the British media recently. When conservative Prime Minister David Cameron announced last year that he was a Smiths fan, Marr went on Twitter to “forbid” him from expressing his love for the band. Morrissey applauded his ex-collaborator, adding that The Smiths’ albums “were not recorded for such people” as Cameron. If that’s mild compared to imagining “Margaret on the guillotine,” the rest of Morrissey’s anti-Cameron diatribe was as splenetic, and splendid, as any fan could hope for.