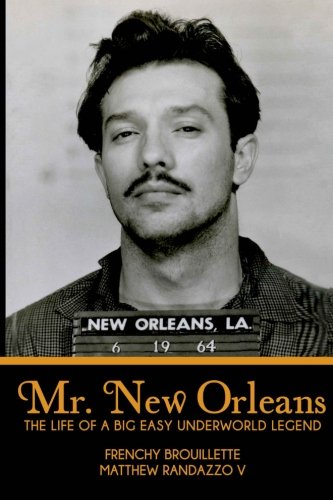 about the same: selling people a good time they desperately wanted.”

So declares Kent “Frenchy” Brouillette, who, for some thirty-odd years beginning in the 1950s, was a notorious underworld figure, a high-living, Mafia-connected pimp whose exploits earned him the sobriquet “Mr. New Orleans” from his admirers.  Brouillette’s boast points to a truth about organized crime that many are loath to admit: The Mafia wouldn’t have lasted as long as it has, and flourished as extravagantly as it did during its heyday, if gangsters weren’t providing goods and services that people wanted—like gambling, drugs, and sex.

Frenchy Brouillette was a very successful flesh peddler, and Mr. New Orleans: The Life of a Big Easy Underworld Legend tells how he did it.  The book’s actual author, Matthew Randazzo V, a New Orleans native who has written several other true crime titles, has crafted a colorful, often fascinating and frequently disturbing first-person narrative from Frenchy’s stories. Though the insights and language occasionally seem too sophisticated for a self-described uneducated Cajun redneck, Randazzo for the most part sustains the illusion that Mr. New Orleans is Frenchy Brouillette’s book, not just his story.

Credibility, however, is an issue. In his introduction Randazzo writes that Mr. New Orleans is an “unapologetically imperfect historical document” in which “corroborated truth is filed next to hard to believe and impossible to verify stories of ancient gangland mayhem.”  In an age when literary con artists like James Frey (A Million Little Pieces) and Margaret Seltzer (Love and Consequences) pass off their inventions as unvarnished truth, Randazzo’s honesty is welcome.

Frenchy Brouillette was born in 1936 in Marksville, Louisiana, a rural town north of New Orleans.  The life of his hardworking and devoutly Catholic family wasn’t for him, so at 17 he set off on his Harley Davidson for the vice capital of the south. His main assets were his looks (he never tires of telling the reader how “pretty” he was), his bodybuilder’s physique, and his eagerness to avoid legitimate work and make easy money.

Not long after his arrival in the Crescent City, he fell in with mobsters who were impressed by those attributes. They hired him to make cash pickups from French Quarter brothels. While making his rounds one morning he met the legendary madam Norma Wallace, who befriended him and schooled him in the prostitution trade.  Commercial sex was just one profit center—albeit a very lucrative one—in the illicit economy of New Orleans, whose CEO was Carlos Marcello, the Mafia boss of Louisiana and one of the most powerful figures in the history of American organized crime.  Thanks to his friendship with Marcello and other mobsters, Frenchy Brouillette became a major player in the New Orleans underworld, and, if he is to be believed, a bystander to its most notorious crime: the plot to kill President John F. Kennedy.

More on that later.  First, some more Brouillette braggadocio.  Frenchy says that in his prime he was “a superstar on the street—a good-looking, muscle-bound bodybuilder who tooled around town wearing Italian silk suits, unbuttoned fluorescent shirts, a diamond ring on every finger, and spit-shined alligator boots.”  He spent his adult life surrounded by “a mob of whores, johns, junkies, gamblers, gangsters, go-go dancers and G-men.”

“I have not done an honest day’s work since I was a teenager,” he brags, “yet I’ve owned strip clubs, bars, casinos, brothels, and even a goddamn bank.”  He also acquired a “1600-page FBI file and dozens of Louisiana criminal indictments,” but attention from the forces of law and order was just a predictable cost of doing business. Besides, he never did “hard time,” thanks to the compliant officials he calls “my friends in the juridical system.”

That points to another truth about organized crime: its symbiotic relationship with the “legitimate” world.  Mr. New Orleans is full of stories of cops, prosecutors, judges, politicians, and businessmen who were happy to do business with Frenchy and his Mafia associates. Two of the book’s biggest rogues are New Orleans DA Jim Garrison, transformed by director Oliver Stone into a heroic seeker of the truth about President Kennedy’s assassination in the meretricious film JFK; and Edwin Edwards, a four-time Louisiana governor—and Frenchy’s first cousin—who currently is serving time in a Federal prison.  Frenchy proudly says that his flamboyant relative “ran the state of Louisiana like a chaotic whorehouse for two decades.”

But the book’s most sensational passages are about the Kennedy assassination.  The chapter “JFK Reloaded” opens—you’ll pardon the expression—with a bang.  “My friends killed JFK,” Frenchy announces.  “Of that I have no doubt. Which of my friends is the question.”

“Just about everybody who has ever been fingered in the conspiracy to kill Kennedy was my buddy, roommate, my business partner, or my customer,” he says, including “a number of characters who have confessed . . . to having been a party” to the plot.  But lacking proof for his claims, Frenchy gives himself an out: you the reader will “have to judge for yourself” whether to believe what he calls “the secret oral history of the New Orleans Mafia on the assassination of John F. Kennedy.”

Brouillette says the conspiracy “supposedly” came together in the spring of 1963. The “architects” were Carlos Marcello and Florida mob boss Santo Trafficante; the Irish-American gangsters Michael and William McLaney, who worked for Marcello and Trafficante; Teamsters leader Jimmy Hoffa and his Midwest Mafia associates; and rogue elements of the Cuban exile community and the CIA infuriated by Kennedy’s failure to topple Fidel Castro and his attempts to reign in the CIA’s power.

This putative plot might sound far-fetched, but Frenchy urges us to “remember that this identical alliance was already working together to assassinate Castro in 1962 and 1963.”  Although Frenchy is hardly the first to argue that Lee Harvey Oswald was only one participant in a Mafia-backed conspiracy, he is the first to claim to have witnessed contacts between Oswald and Mafia chief Carlos Marcello. He recalls having seen Oswald in the company of Marcello “a few times” in 1963, including in Marcello’s office. “My understanding was that Oswald had become a runner of some sort for Carlos,” he says.

Frenchy claims that Tex Cody, an enforcer for the McLaney brothers who also was a “freelance violence specialist” for Marcello and other mob bosses, told him that Oswald was “just a patsy,” a “wannabe the Marcellos [Carlos and his Mafioso brothers] knew with a Marine background.” He told Frenchy that there were three gunmen in Dallas on November 22, 1963: one on the grassy knoll, another in the Texas Book Depository, and another hidden in a manhole on the route of Kennedy’s motorcade.  Frenchy says that Cody, shortly before his death in 1983, revealed to him that he was the gunman on the grassy knoll.

Frenchy believes Cody, “a man not known for concocting stories about his exploits.”  The only problem is, Cody was in jail in Indiana on a burglary charge the day Kennedy was killed and “for months afterwards.”  But Frenchy thinks Cody, an undeniably formidable and resourceful character, could have escaped from jail to kill the president.

As if he can see the reader’s raised eyebrows, he insists that “Even if Tex did not actually pull the trigger, he would have been in a position to know if the McLaneys and the Cubans had been involved.”  Frenchy further maintains that his attorney Dean Andrews, who also represented Carlos Marcello and Lee Harvey Oswald, told him that Oswald indeed was a patsy for the crime.

Though much of Frenchy’s “secret oral history” of the Kennedy assassination is unverifiable and credulity-straining, there’s no gainsaying his loathing for the president.  In fact, he’s downright gleeful that Kennedy got “whacked out,” to use his gangster parlance. JFK made “insane, self-destructive decisions” because he was on a “multi-year, orgiastic bender of speed and steroids.” Brouillette recounts the various crises of Kennedy’s brief presidency—the Cuban missile crisis, bungled Castro assassination plots, turf battles with the CIA and FBI, growing involvement in Vietnam, and JFK’s “rampage” against the same Mafiosi who in 1960 allegedly stole the presidency for him—and concludes, “It’s surprising that this rabid dog wasn’t put down quicker before he got us all killed.”  No Camelot nostalgia for Frenchy Brouillette.

Organized crime and show business have been figurative bedfellows for many decades; Frenchy made the connection literal.  The celebrities who he says used his services included Dean Martin, who was too drunk to perform with the hooker Frenchy sent him; rock ’n’ roller Jerry Lee Lewis and his “sleazebag televangelist cousin Jimmy Swaggart;” and Danny Thomas, the wholesome TV sitcom star famous for his charitable work with St. Jude’s Children’s Hospital and his devout Catholicism. Thomas’ daughter Marlo has said that her father was so pious that growing up with him was like living with the pope. But Frenchy knew him as a bon vivant who “loved to party” with hookers.

On the topic of prostitution, Frenchy is candid yet disingenuous. He claims that he, unlike most pimps, never beat or otherwise mistreated his women.  He also insists that his pimping was a victimless crime. Prostitution is simply a commercial transaction between women who freely choose to sell themselves and men who want what they have to sell. But that doesn’t square with Brouillette’s own accounts of these women as emotionally scarred and needy, often drug-addicted, and so damaged that they accept beatings by their pimps as expressions of love.

Frenchy has a point that the criminalization of prostitution is responsible for many of the evils associated with it. But if it were decriminalized and regulated, it would hardly generate the outrageous profits that subsidized the high-rolling lifestyle he enjoyed.  Mafia pimps like him would be put out of business.

The good times stopped rolling for Frenchy in the eighties. He says he had thirty flush years, followed by “thirty years when the good times repeatedly trolled off a cliff and landed on my head.”  Bad marriages to unstable women, drugs and alcohol, and a failure to save much of his ill-gained loot tarnished the glamour of being Mr. New Orleans. When Hurricane Katrina struck New Orleans in 2005, Frenchy was stranded in a friend’s house. But being a hustler par excellence, he did okay in the ruined city. He even found a client in a FEMA official, who spent “$10,000 a week on sex, drugs, and multi-course meals at [the top restaurant] Antoine’s.”

Now 74, Frenchy Brouillette is still in New Orleans, a grizzled old reprobate who says he has no regrets. “I made money without paying taxes; I was a gangster without doing any of the dirty work myself; I committed crimes without doing hard time; I made millions without working; I grew old without growing up; I had sex without commitment; and I became Mr. New Orleans without winning an election or even a bodybuilding contest. I lived to defy the consequences of living. And that’s what makes me Mr. New Orleans.”