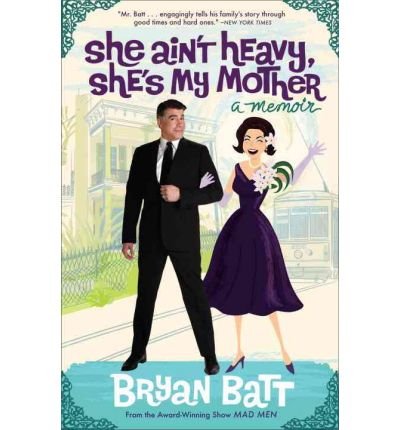 Readers be warned: this review of Bryan Batt’s She Ain’t Heavy, She’s My Mother, will violate the first rule of book reviewing laid down by John Updike: “Try to understand what the author wished to do, and do not blame him for not achieving what he did not attempt.”

This reviewer is actually going to flout the second half of Updike’s dictum. It is rather easy to understand well what Batt tried to do in his memoir—or “momoir,” as he’s called the book—of growing up in New Orleans with Gayle Batt, his redoubtable Southern belle of a mother.  Batt set out to pay homage to and celebrate Gayle, the “steel magnolia” whom he says “made me the man I am today.” He has succeeded admirably in this regard, capturing his mother’s charm, strength, and warm, loving nature. But that success comes at the expense of what could have been a more interesting and revealing book. Updike notwithstanding, this reviewer wishes Batt had attempted and achieved more.

Bryan Batt is a stage, film, and television actor best known for playing Sal Romano, the closeted gay art director on the cable TV series “Mad Men.” Unlike his character, Batt is openly gay. (He and his longtime partner Tom Cianfichi share what he calls a “tri-coastal lifestyle” divided between New Orleans, Los Angeles, and New York.) The mother-fixated homosexual is a discredited Freudian cliché, but Batt’s book suffers from being too tied to Mama Gayle’s apron strings. Too often Batt brings up matters of broad social significance—homosexuality, AIDS, race and prejudice, Hurricane Katrina—only to give them short shrift so he can get on to the next anecdote about Mom.

Batt, in his author’s note, says that his stories are “based on factual events and actual people . . . but a couple of alterations here and there have been applied for the purpose of theatrical impact and to protect the innocent and the punishable.” At times the embellishment shows, with incidents and dialogue that don’t ring totally true. But in general Batt’s voice is trustworthy, as well as warm, candid, and funny.

He comes across as a goodhearted Southern boy who knows he was fortunate to have had the upbringing he had, in an upper middle-class family that was loving and intact. The Batts were privileged, but that’s not to say their existence was untroubled. His father John’s alcoholism (which led to his untimely death even after years of sobriety) and an extramarital affair severely strained his parents’ marriage. Gayle herself developed breast and lung cancer, which, after grueling treatments, she survived.

Batt says that although physically he is “a finely detailed replica” of his tall and rugged father, “my heart was that of my mother.” She’s the type of white Southern lady who calls everyone “dawlin’” and gives her sons such endearments as “doodlebug” and “pumpkin eater boy.” Bryan inherited her humor, emotional resilience, and theatrical personality. She also taught him some valuable life lessons, about never accepting defeat and being comfortable in one’s own skin. These would prove particularly helpful when he was struggling to accept his sexuality and to establish himself as an actor.

Like many gay kids, Bryan’s difference was evident early on. As a boy he disliked football, but was “enthralled” with musical comedy. The future Broadway Baby discovered his mother’s collection of original cast recordings, and would “sing and dance along to Ethel Merman belting out “Rose’s Turn.” When he asked Santa for an Easy Bake Oven as his Christmas present, his mother decided to send him to a psychologist.

Bryan’s atypical gender behavior also worried his father. John Batt and his first-born son Jay would watch football games together, and although that pastime didn’t interest Bryan, being excluded from it hurt. The sessions with Dr. Sugar consisted mostly of Bryan drawing pictures and playing checkers with the doctor. Batt has little to say about the therapeutic purpose or benefits of these activities. But his three years in therapy helped him to see that “my father and I were complete opposites; it didn’t mean that he loved me any less. We were just different.”

Whatever concerns his parents may have had about their son, they never rejected him or tried to force him to change. His flamboyance instead flourished in the Batt household. While still in elementary school, Bryan became his mother’s style and fashion advisor, selecting outfits for her. (A department store clerk expressed amazement that a thirteen-year-old could be so knowledgeable about Geoffrey Beene.) But despite this accommodating environment—he even had a grandfather who’d request his Carol Channing impression—Bryan had a hard time accepting his sexuality. He didn’t come out to his mother until he was 30 and a working actor in New York. He never told his father, who died at 55 from alcohol-related heart disease.

Bryan writes that he was “completely closeted and terrified by the idea of anyone knowing my secret,” but, not being an introspective or analytical type, he never examines why this was so. He was, however, very concerned about his mother's reaction to his disclosure. Telling her “wasn’t horrible; it wasn’t easy.” Gayle assured her son that she loved him and his partner, Tom. But when she returned to New Orleans from New York, she made what Bryan says was “a very important phone call”—to Doctor Sugar.

Bryan came out to his mother Gayle when he was about to get his biggest break as a stage actor. He’d auditioned for and won the part of Darius, a Broadway chorus boy who is stricken with AIDS, in Paul Rudnick’s 1993 play “Jeffrey.” (Batt would go on to reprise the role in the film version.) “Jeffrey” wasn’t a great play, but it was significant as an artistic response to the AIDS epidemic. In tone and style, though, it was strikingly different from other plays about AIDS. William Hoffman’s “As Is” was a wrenching drama and Larry Kramer’s “The Normal Heart” a furious polemic. But “Jeffrey” was a mostly comic portrait of a neurotic gay New Yorker—the title character—who runs from sex and emotional commitment while the plague rages. As Jeffrey’s pal Darius, Batt was both funny and moving.

Batt tells an amusing story about his audition for the part. But he offers no telling observations about the play or its significance, and even worse, slights its raison d’etre: the AIDS epidemic. The virus ravaged New York’s gay community, and its victims included many performing artists. But Batt keeps mum about that: no thoughts about the horrific devastation, no fears expressed about himself or his friends and colleagues in the theater. No outrage over government inaction or societal bigotry. But we do learn that Mother was made a bit uncomfortable by Rudnick’s risqué script.

Nor does Batt have much to say about Sal Romano, his character on Mad Men. Sal is a closeted gay man living in the early 60s, unhappily married to a woman, and fearful that his secret might be exposed. Does Batt feel any affinity to him? Did he bring anything from his own experience of grappling with his sexuality to the role? We never find out. Batt does tell us, though, that he was worried how Mom would react to a scene of Sal having “a lusty romp” with a hotel bellhop.

She liked it just fine.