The Pope Is Not Gay! 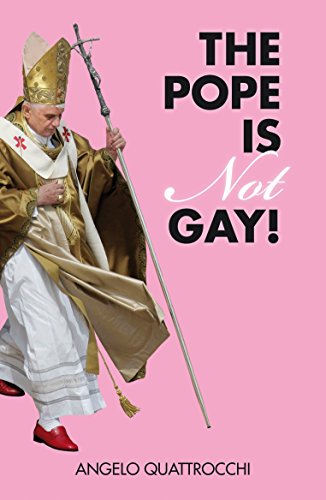 On May 13, 2010, during the annual Mass at Fatima’s sanctuary in Portugal, Pope Benedict XVI delivered yet another of his orations on the evils of homosexuality, and the impermissibility of granting legal recognition to same-sex relationships. Gay marriage, he declared, is one of “the most insidious and dangerous challenges that today confront the common good.”

In September, on the occasion of a visit to Rome by the German ambassador to the Holy See, he returned to this theme, saying that society must not “approve legislative initiatives that imply a reassessment of alternative models of couple relationships and families” because such measures would “contribute to the weakening of the principles of natural law and . . . to confusion around societal values.” Heterosexual marriage, purportedly under siege by sodomites and their supporters, is the only permissible sexual arrangement because it alone can “transmit human life.”

Benedict, who is nothing if not consistent, has denounced homosexuality and gay relationships for decades, well before he ascended the throne of St. Peter. He’s most notorious for having declared homosexuality “a more or less strong tendency towards an intrinsic moral evil,” thereby condemning millions of humans who peaceably practice same-sex love as inherently defective individuals whose very existence threatens all that is good and holy.

There has been no lack of dissenting voices to refute Benedict’s hateful nonsense. Christopher Hitchens, for one, has been writing deliciously scathing commentary about the pope and the Vatican’s arrogance of power for the online magazine Slate. Now we have from Italy, the nation with the unfortunate duty of hosting Benedict’s doleful church on its charming terrain, The Pope is Not Gay!, a new indictment of the man its author, Angelo Quattrocchi, calls “the scourge of homosexuals and all non-reproductive sexual practices.”

Quattrocchi was a poet, author, and a journalist who worked for the BBC and Italian television. It is not clear whether Quattrocchi, who died last year, was himself gay. However, he was an anarchist with excellent anti-authoritarian and anti-clerical credentials, and a healthy sense of outrage over the Catholic Church’s demonization of gays and lesbians. His polemic is as irreverent as you would expect; hackles have and will be raised among the pope’s admirers, both in Italy and abroad.

For one thing, Quattrocchi repeatedly refers to the former Cardinal Joseph Ratzinger as “Ratzi,” a campy nickname that suggests a Teutonic rent boy. That mischievous suggestion is not accidental. Paging Doctor Freud, Quattrocchi wonders whether the pope’s antipathy to homosexuality, and to all sexual expression other than the conjugal hetero variety, “isn’t the fruit of a deeply repressed desire for what he condemns. Of an unconscious desire which manifests itself as its opposite.”

Noting the pope’s sartorial flamboyance, the subject of much comment in the international media, Quattrocchi observes, “. . . our hero has discovered the dazzling clothes, the trappings of power and wealth, which centuries of pomp have draped on the shoulders of his predecessors. In this way, his true nature, his deepest unspoken inclinations are revealed. In short, he might simply be the most repressed, imploded gay in the world.”

The homophobic pope a closet queen? It’s not only his fashion choices (ermine-lined hats, cute red Prada shoes, designer sunglasses and fabulous cassocks) that inspire this speculation. Quattrocchi also points to Ratzinger’s intimate relationship with his private secretary, the German cardinal Georg Ganswein, who Quattrocchi describes as “remarkably handsome, a cross between George Clooney and Hugh Grant, but, in a way, more beautiful than either.” Ganswein and the pope spend most of the day in each other’s company and are inseparable in public appearances. The two are ideological soul mates: the younger man is as theologically reactionary as his boss.

When Ratzinger assumed the papacy in 2005, he was an old man, in his early 70s, a gloomy Bavarian who entirely lacked the charisma of his predecessor John Paul II. Ganswein, “his adoring batman,” advised him on how to make his mark. After the previous pope’s representative departed, Ganswein helped Ratzinger find his media strategy, which turned out to be “a combination of doctrinal rigidity and flamboyant dress.”

All this is very amusing, and, more to the point, not implausible. Homosexuality, whether repressed or indulged, is hardly alien to the Roman Catholic clergy and hierarchy. If Benedict were in fact homosexual, he would not be the first pontiff with same-sex inclinations. The historian James Saslow, in his Homosexuality in the Renaissance, noted that the popes Paul II and Julius II were accused during their lifetimes of having seduced young men.

But other than illustrating Vatican hypocrisy and Freud’s concept of reaction formation, does it really matter whether Benedict is gay? What’s more relevant is the odious nature of his anti-gay edicts and the impact they have on the lives of actual homosexual people. Quattrocchi’s book is far more compelling as a polemic against the pope’s homophobia. He lays out the indictment in five concise chapters that recap Ratzinger’s ideological development, his rise to the papacy, and his politicking.

Quattrochi condemns Ratzinger for his “persistent, dogmatic defense of the sacred indissoluble ties of marriage and of the family, to the exclusion of any other design for living—a paradigm which is truly out of date.” Before becoming pope, Ratzinger headed the Congregation for the Doctrine of the Faith, the re-branded version of the Office of the Holy Roman Inquisition. In 1986, “our little hero, the inquisitor” produced, at the request of Pope John Paul II, a “Letter to the Bishops of the Catholic Church on the Pastoral Care of Homosexuals.” In the letter, he cited a 1975 Vatican declaration, “which ‘took note of the distinction commonly drawn between the homosexual condition or tendency and individual homosexual actions’ and described the latter as ‘intrinsically disordered.’”

But according to Ratzinger, some in the Church gave “an overly benign interpretation” to “the homosexual condition itself, some going so far as to call it neutral, or even good. Although the particular inclination of the homosexual person is not a sin, it is a more or less strong tendency towards an intrinsic moral evil; and thus the inclination itself must be seen as a moral disorder.”

The 1986 document, says Quattrocchi, “is the opening act of two decades of unrestrained homophobia.” Quattrocchi summarizes the document’s message as: “I condemn you—he says—and as always I discriminate against you. But I do it to please my God, and of course, for your own good.”

In 1992, Ratzinger went even further in a “revised statement” that expanded on the 1986 letter. He wrote: “Among other rights, all persons have the right to work, to housing, etc. Nevertheless, these rights are not absolute. They can be legitimately limited for objectively disordered external conduct. This is sometimes not only licit but obligatory. This would obtain moreover not only in the case of culpable behavior but even in the case of actions of the physically or mentally ill. Thus it is accepted that the state may restrict the exercise of rights, for example, in the case of contagious or mentally ill persons, in order to protect the common good.”

After having equated homosexuality with disease and insanity, and implying that governments should restrict the rights of gays just as it places constraints upon contagious or insane individuals, Ratzinger moves on to the issue of “coming out.” He’s against it, of course. “The ‘sexual orientation’ [note the dismissive quotation marks] of a person is not comparable to race, sex, age etc. also for another reason . . . An individual’s sexual orientation is generally not known to others unless he publicly identifies himself as having this orientation or unless some overt behavior manifests it.

As a rule, the majority of homosexually oriented persons who seek to lead chaste lives do not publicize their sexual orientation. Hence the problem of discrimination in terms of employment, housing etc, does not usually arise.”

In Ratzinger’s view, gay people “have no conceivable right” to love or have sex with someone of the same gender. They must remain chaste, suffer their condition in silence, and never make demands on society to recognize their claims for equal treatment. If they don’t comply, it’s perfectly alright to deny them jobs, housing, and other rights. As Quattrocchi dryly comments, “So much for Christian charity.” (The letter from 1986 is included as an appendix to The Pope is Not Gay!, along with the 1992 statement and several other documents pertaining to the Vatican’s position on homosexuality.)

As an Italian, Quattrocchi resents the pope’s intrusion into his nation’s politics, and what he calls his “constant and petulant interference in social life,” including Ratzinger’s batty insistence that no one should use condoms to prevent AIDS. Ratzinger, he explains, champions the Roman Catholic ideology of “integralism,” which holds that civil law should reflect the dictates of the Church. Integralism insists that only God’s Law—as interpreted by Roman Catholic Church, of course—is legitimate. The separation of Church and State is utterly alien to this view.

Quattrocchi deplores how institutions of Italian society pander to the pope and the Church: “The Italian press genuflects and pricks up its ears, politicians of the Right and Left behave like jackasses.” This is all too true: Italy’s conservatives proudly march under the pope’s integralist banner, as do the centrists and liberals known as “theodems.” This is why Italian gays have been unable to win any of the legal protections, including partner benefits, that have been established in virtually every other Western European nation.

But Ratzinger’s rigidity notwithstanding, more and more Catholics, in Italy and elsewhere, are tuning out the message. That is largely because the Vatican has lost what little credibility it had as an upholder of morality through its handling of its many sexual abuse scandals, particularly those involving children and adolescents. The Vatican, as well as the church hierarchy in Europe and America, has covered up cases of abuse, protected known abusers, and even denigrated victims. The Church has been more concerned with protecting its own reputation than the vulnerable young people entrusted to it, and has acted as if Church law trumped civil law. Moreover, the full extent of the Roman Catholic Church’s sexual abuse and pedophilia scandals still is coming to light, with ongoing revelations from Belgium and Ireland.

Joseph Ratzinger aka Pope Benedict XVI no doubt will continue to rage against gay people as destructive immoralists. But thanks to his own church’s corrupt behavior, few will ever again hear his cruel, absolutist, and nonsensical pronouncements without considering their source.