Orange Sunshine: The Brotherhood of Eternal Love and Its Quest to Spread Peace, Love, and Acid to the World 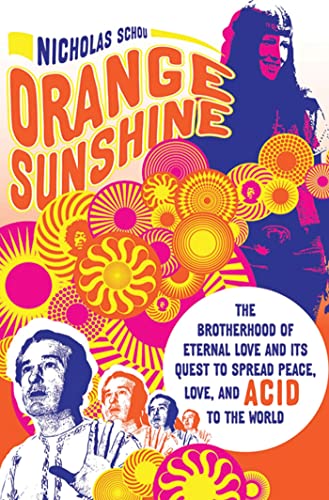 You might think there aren’t any more good stories left to be told about the sixties. Hasn’t it all been covered—Vietnam, the counterculture, civil rights and urban uprisings, sex, drugs and rock ’n roll . . . yada yada yada? Yes, that epochal decade has been strip-mined by countless journalists, cultural commentators, and academics. But there’s one story that hasn’t been fully told, and it’s a good one: the exploits of a bunch of LSD evangelists and drug smugglers known as The Brotherhood of Eternal Love.

The Brotherhood was born in Laguna Beach, California, an unlikely birthplace given the coastal town’s location right smack dab in ultra right-wing Orange County. For a surprisingly long time the Brotherhood managed to outwit the authorities, running the biggest marijuana and hashish dealership in the United States right under their noses. But their greatest notoriety came from their role in producing and distributing Orange Sunshine, a highly potent form of LSD. In their zeal to psychedelicize the world, they pulled off some amazing stunts, like dropping thousands of Orange Sunshine tablets from a cargo plane to a crowd of 25,000 hippies at a rock festival.

They also were at least partly responsible for one of the sixties’ biggest bummers. They dosed unwitting members of the Hells Angels with Orange Sunshine at the infamous 1969 Rolling Stones concert at Altamont, and the acid, instead of mellowing out the bikers, as the Brothers foolishly hoped, triggered the violence that made the event a nightmarish debacle.

The leaders of The Brotherhood also were close to Timothy Leary, the Harvard psychologist turned LSD proselytizer (“tune in, turn on, drop out”) and counterculture guru. They, with help from the Black Panthers and the radical Weathermen, sprang Leary from prison in 1970. Although it had been widely believed in the West Coast drug culture that Leary was the Brotherhood’s leader, Orange Sunshine’s author, Nicholas Schou, reports that the Californians actually recruited him to their cause. Leary, in fact, reportedly called John Griggs, the founder of the Brotherhood, “my guru.”

If the Brotherhood and their most famous mind-altering substance had become countercultural legends on the West Coast, much remained mysterious about their origins and exploits. Schou, a staff writer for the OC Weekly, read an article that another of the paper’s reporters had written about the acid drop at the rock festival. Amazed by the story and prodded by his editor to further investigate Laguna Beach’s history as a center of drug dealing, Schou began to track down some of the key players.

In 2005 he wrote an article, “Lords of Acid,” about the Brotherhood’s activities during the late sixties. His curiosity piqued, he spent the next four years researching and writing Orange Sunshine, doggedly pursuing former members of The Brotherhood of Eternal Love for interviews. Some, including Griggs, had died; others, particularly those who had lived as fugitives after the Brotherhood’s demise, refused to talk. But those who agreed to be interviewed—including some of the cops who eventually brought down the organization—rewarded Schou’s tenacity, enabling him to tell what he calls “the most surreal saga of the 1960s that has never been told.”

The founding members of The Brotherhood of Eternal Love, mainly working- and lower-middle-class California youths, were pretty unlikely poster boys for expanded spiritual consciousness through chemistry. John Griggs, whom Leary hailed as “the holiest man who has ever lived in this country,” was an aggressive former high-school wrestler from Anaheim who loved picking fights with bigger men. Other founding Brothers, like Eddie Padilla, Robert Ackerly, Tommy Tunnell, Rick Bevan, and Travis Ashbrook, were violent misfits, petty crooks, surfers, and low-level marijuana dealers. Schou observes that the charismatic Griggs recruited them and others “into a tribe of people who viewed acid as a sacrament, a window into God itself, a key to unlock what Aldous Huxley famously called ‘the doors of perception.’”

Griggs and his crew, says Schou, were “psychedelic warriors” who, instead of dropping out of society, “created their own version of it, one that they hoped to single-handedly spread through their entire generation. Their goal: turn on the entire world.” Only in his early 20s, Griggs had his own legally registered church, and he used its tax-exempt status to establish Mystic Arts World, a combination bookstore, boutique, and head shop. The store, built on money from drug sales, was a lynchpin of the Brotherhood’s efforts to transform Laguna Beach into the epicenter of Southern California’s acid scene. Young acidheads from all over the state flocked there because they knew they’d find the most potent psychedelics.

Messianic about acid, Griggs and the Brotherhood made most of their money from cannabis: marijuana smuggled across the Mexican border, and Afghan hashish, which had never been available in the U.S. With Griggs’ blessing, Rick Bevan and Travis Ashbrook headed to Afghanistan to lay the ground for what became “the biggest hash-smuggling operation in the United States of America.” In Kandahar they met up with the Tokhi brothers, Nazrullah and Hayatullah, who became their suppliers. (“You guys want to buy some fine Afghan shit?” Nazrullah said by way of introduction when he saw the two Americans in Kandahar’s main square.) On their first hash run, Bevan and Ashbrook bought some Afghani musical instruments, took them apart, and filled them with the Tokhi brothers’ product. But as the enterprise expanded, Brotherhood members packed entire vehicles—Volkswagen vans, Land Rovers, mobile homes—with hashish, and had them shipped back by sea to the U.S..

The Brotherhood’s smuggling was remarkably successful, thanks to their ingenuity, tight organization, and the voracious American appetite for their merchandise. But all highs come to an end, and The Brotherhood’s crash was hard. Incensed by the drug activity in Laguna Beach, local authorities cracked down. The Mystic Arts Center burned down in a mysterious fire that later was found to have been started by a member of the far-right John Birch Society. Police harassment drove John Griggs and other Brothers and their families to move to a ranch in the mountains of Southern California. Griggs hoped to create there a utopian commune where he and his friends could put into practice countercultural values, including psychedelic exploration, in a peaceful, bucolic environment.

It ended badly. When one of the communards, a young woman, drowned in the ranch’s pond while tripping on acid, the police arrived, and finding Timothy Leary on the premises, arrested him. A week later, cops raided the ranch and confiscated large quantities of pot, hash, and Orange Sunshine. Then, in August 1969, John Griggs died, at 25, from an overdose of synthetic psilocybin, a drug derived from psychoactive mushrooms. Griggs, through his charisma and leadership abilities, had managed to “keep the competing personalities within the Brotherhood from devouring one another.”

After Griggs’ death the group started to disintegrate. The government did the rest, finishing off the group with massive drug busts in 1972 and 1973 that nabbed all the Brotherhood’s leading figures. Timothy Leary and Glenn Lynd, a founding member, cooperated with the authorities and testified against their friends. “The defeat of the Brotherhood of Eternal Love,” Schou writes, “was celebrated in an October 3, 1973 hearing by the U.S. Senate Subcommittee on Internal Security titled ‘Hashish Smuggling and Passport Fraud: The Brotherhood of Eternal Love.’” The psychedelic idealists ended up as felons, though some returned to drug dealing after serving time.

Nicholas Schou, whose previous book, Kill the Messenger, chronicled the CIA’s alleged involvement in crack cocaine trafficking, skillfully reports an important piece of American social history. His book is the definitive account of The Brotherhood of Eternal Love, whose story was previously told only partially and not always accurately. His reporting, though, is better than his writing, which is solid newspaper journalism but not great storytelling. The book would have benefited from a more vivid and compelling prose style, one better suited to its outrageous events and flamboyant characters. At times Orange Sunshine becomes a slog, with the many accounts of smuggling operations blurring into one another.

Schou, though forthright about the Brotherhood’s darker side, nonetheless is mostly nonjudgmental about the group, and even sympathetic to their aims. Provocatively, he allows the former hash smuggler Rick Bevan to have the last word. “The price we paid was far more than any of us ever expected,” Bevan says. “. . . but all of that was worth it because we totally succeeded in what we were trying to do. . . .The changes taking place, the hashish being smoked, the dreaming of brotherhood, the LSD experiences that opened people up to their souls, and the fact that there was something beautiful and spiritual about them. . . . We ushered in the age we are in now, which reflects a much more open-minded, openhearted and spiritually inspired world.”