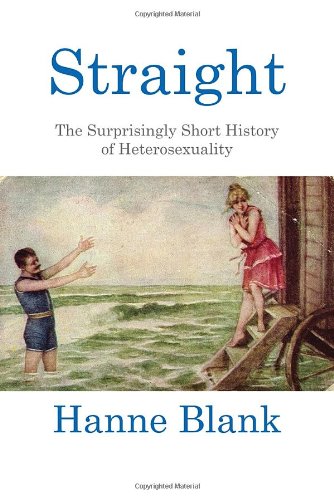 “‘Heterosexuality is historically constituted,’ she concludes, ‘and for now we believe in it. And this, too, shall pass.’”

Heterosexuality is generally assumed to have existed ever since Adam and Eve frolicked naked in Yahweh’s garden. But it actually was invented in Germany in the 19th century. Men and women of course desired each other, had sexual relations, and formed relationships and families before then. But they didn’t think of themselves as heterosexual or as having a straight sexual identity. They couldn’t have, because heterosexuality (as a term, concept, and ideology) didn’t exist until the writer and sex law reformer Karl Maria Kertbeny invented it in 1869.

Hanne Blank, in Straight: The Surprisingly Short History of Heterosexuality, examines the development of heterosexuality in the Western world following the adoption of Kertbeny’s neologism. (The German also proposed the term “homosexual” at the same time as “heterosexual,” so he can be said to have “invented” homosexuality, too.)

The author’s perspective will be familiar to anyone who has read Michel Foucault or any of his many intellectual progeny. The ways we think about sex and act as sexual beings are a product not of nature or God’s plan but are historically and socially constructed, shaped by the regulating practices of institutions like the church, state, law and medicine, and their institutional discourses.

Jonathan Ned Katz, a Foucault-influenced historian best known for his groundbreaking Gay American History, brought this approach to bear in his 1995 book, The Invention of Heterosexuality. Ms. Blank’s book is indebted to Katz, whom she cites, and if she adds little to Katz’s account besides more recent references and a personal perspective on the topic, Straight nonetheless is accessible and engaging, often witty and penetrating in its insights.

Whereas Katz is a gay man, Ms. Blank is a “straight” woman whose relationship with an “intersex” person is the starting point for her investigation of heterosexuality. She writes that her partner, though “diagnosed male at birth,” has an XXY genetic pattern, one that “is simultaneously male, female, and neither.” This pattern, called Kleinfelter Syndrome, is “one of the most common sex-chromosome anomalies,” affecting about a half-million Americans.

What does this genetic anomaly imply for sexual orientation? For one thing, it challenges one of prevailing cultural assumptions about heterosexuality—that it’s about making babies. Because of his DNA, her partner can’t impregnate her. And his androgynous appearance, also due to his genetic makeup, sometimes misleads casual onlookers into thinking that he and Ms. Blank are lesbians.

Nowadays reproduction generally is not regarded as the sine qua non of heterosexuality, not even by the Catholic Church. But the concept of sexual orientation, which still is very much with us, is “wholly dependent upon . . . the general consensus that there are two and only two human biological sexes.” The intersexuality of her partner and others like him complicates that consensus. Ms. Blank says that “the convenient sorting of human beings into two biological sexes is an artifact of a historical system that was formed at a time when medicine, biology, and social theory were capable of far less than they are now.” She argues that we are still using “a limited set of ideas and terminologies from the 19th century” that circumscribe our thinking about gender and sexuality.

Ms. Blank writes that although “heterosexual” has a scientific aura, the term was adopted not “because it represented a new scientific verity” but because it was useful, socially and politically.

During the late 19th century, profound economic, political, and social change transformed the Western world, undermining traditional arrangements, including gender relations and family structure. The novel coinage “seemed to offer a dry, firm place for authority to stand.” “This new concept, gussied up in a mangled mix of impressive-sounding dead languages [“heterosexual,” like “homosexual,” is a Greek and Latin hybrid], gave old orthodoxies a new and vibrant lease on life by suggesting, in authoritative tones, that science has effectively pronounced them natural, inevitable, and innate.”

Although heterosexuality has been “a synonym for ‘sexually normal,’” its meaning has been anything but fixed. “There seems to be general agreement,” author Blank observes, “that ‘heterosexual’ has to do with men and women and the approved sorts of sexual, emotional, social, familial, and economic attractions and activities that might go on between them, but the overall picture is ambiguous and the details change depending on who you ask and when in time you look.”

Ms. Blank’s chronicle of straightness, encompassing courtship and marriage, pop culture mythologies, science, politics, and economics, not only points to the changing nature of heterosexuality over time. It also debunks outdated ideas about the differences between men and women. We now know that the genders are more alike than dissimilar in abilities. What goes for gender also goes for its sibling, sexuality.

Though some scientists seem fixated on establishing fundamental, biologically rooted differences between gays and straights—and as Ms. Blank convincingly demonstrates, they’ve failed—it is increasingly evident that the lifestyles, values, family arrangements, and attitudes toward sex of these two supposedly antithetical groups are converging. This horrifies conservatives obsessed with upholding a rigid sexual binary that declares one side normal, healthy, and superior, the other sick, perverted, and inferior. But their hysterical homophobia increasingly has a last-gasp quality about it, at least in the Western world.

Ms. Blank seems resigned to the fact that, for now, our thinking about sexuality and gender largely is confined within “the heterosexual/homosexual scheme.” And, returning to the personal, she acknowledges that despite her partner’s androgyny, she and he enjoy privileges denied to non-heterosexuals.

But she expresses a utopian wish that someday humanity will transcend this limiting duality. She believes that eventually “we will imagine our way into some different grand explanation, some other scheme for explaining our emotions and our desires and our passionate entanglements.”