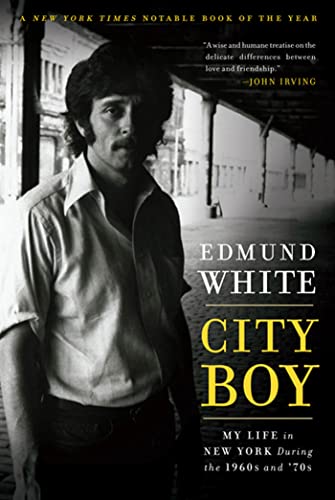 Edmund White, who will turn 70 in 2010, is the grand old man of American gay literature. But when the future author of such acclaimed novels as A Boy’s Own Story and The Beautiful Room Is Empty, as well as nonfiction titles, biographies of Proust and Genet, and The Joy of Gay Sex, arrived in New York City in 1962, he hardly could have imagined that he’d one day be regarded as such.

At the time there indeed were well-known and acclaimed homosexual writers (Vidal, Williams, Isherwood, Gide, Baldwin) but their work rarely focused on gay characters or themes. It was not until the end of the sixties, with the Stonewall Rebellion and the rise of gay liberation, that gay literature began to emerge as both a genre and a literary movement.

City Boy, White’s latest book, and his second memoir (he published My Lives in 2005), recounts his coming of age as a gay man and his development as a writer. White offers some great gossip about literary celebrities, particularly Susan Sontag, insightful commentary on gay life and literature, and some jejeune political analysis. If not one of White’s major works, City Boy nonetheless is an entertaining and revealing account of two decades of profound personal and social transformations.

White came to New York as a 21 year old of Midwestern origins who had earned an undergraduate degree in Chinese and had just been accepted by Harvard’s doctoral program in Chinese. But he abandoned Harvard for Stan, a young man who, like White, had moved to New York to make his mark as an artist, in Stan’s case, as an actor. The two lived together, but their relationship bore little resemblance to the committed gay partnerships of today. In fact, says White, “We never spoke to outsiders of our ‘partner’” since at the time the term did not exist.

Moreover, Ed and Stan, like so many gay men in the pre-liberation days, suffered from what would later be called “internalized homophobia,” a negative self-image that reflected the judgment of a hostile society. White even underwent psychiatric treatment to be “cured” of his homosexuality."
“In the late sixties I was a living contradiction,” he recalls. “I was still a self-hating gay man going to a straight psychotherapist with the intention of being cured and getting married.” When his shrink told him he would never get “better” while living with another man, he moved out of the apartment he shared with Stan.

White admits that although he was a regular at The Stonewall Inn, a seedy, Mafia-owned Greenwich Village gay bar, he disapproved when patrons, in August 1969, violently resisted a police raid on the establishment. “I thought we shouldn’t create a fuss,” he says. “This was bad for our image. I said out loud, ‘Oh come on, guys.’” He acknowledges that he completely misjudged the significance of the event that came to be known as The Stonewall Rebellion: “I obviously had no idea how serious the uprising was or would prove to be, how it would usher in a whole new era of gay consciousness.”

As the sixties gave way to the seventies, White became an avid consumer of the new decade’s gay freedoms, especially its sexual opportunities. He adopted what came to be known as the “clone” look and lifestyle, growing a mustache, building his body in gym workouts, and enjoying lots of sex with many men.

New York in the seventies was for gay men a mix of heaven and hell. The city’s economy was in terrible shape, public services were deteriorating, and violent crime was common —including attacks on gay men by gangs of straight youths. White recalls how his peers wore whistles when they went out at night to alert each other of homophobic assaults. But it also was a time of freedom and self-discovery for men who, like White, had been closeted and self-hating.

New York City, though “frightening or risible to the rest of the nation,” was for the gay men who lived there “the only free port on the entire continent.” Reading that, I wondered, were White and his circle so parochial that they’d never heard of San Francisco?

New York, besides being a gay mecca, nourished young, ambitious writers like White. Despite the “Romantic myth” that artists work in solitude and can create anywhere, White says he discovered that “the artistic climate of a particular city and milieu” did matter. “I was lucky to live in New York when it was dangerous and edgy and cheap enough to play host to young, penniless artists.”

During the seventies, White met and befriended, and in some cases had sex with, some of the most influential and radical figures in American arts and letters. Some already had attained great fame and wealth; others were full of promise but poor and struggling. The list includes the painter Jasper Johns; Broadway star Larry Kert; avant-garde theater director Robert Wilson; the poets James Merrill, Richard Howard, and John Ashbery (White went to bed with Ashbery and his boyfriend), Vladimir Nabokov (who praised White’s first novel, Forgetting Elena, not because of its literary merits but because he liked White); and, during a stint in Venice, art collector and social doyenne Peggy Guggenheim.

White met the photographer Robert Mapplethorpe when he, having ended his relationship with the poet and punk rocker Patti Smith, was gaining renown as a cutting-edge gay artist. White relates an offhand but repellent comment of Mapplethorpe’s that no doubt will confirm longstanding criticisms that the photographer held racist attitudes toward the black men he fetishized in his work.

But the juiciest dish is about Susan Sontag. White devotes an entire chapter to his complicated friendship with the brilliant literary critic, essayist, and novelist, and it’s one of the best in the book. He met Sontag at the home of sociologist Richard Sennett. She had been his idol for many years before they met, and once they connected they became close. But his portrait is etched in acid: though he gives Sontag her due for her brilliance and courage, he can be devastating about her as well. Though Jewish and a lesbian, she was “also just a bit anti-Semitic and homophobic.”

When the friendship was good, it was very good. Sontag wrote an enthusiastic blurb for White’s breakthrough novel, A Boy’s Own Story, and recommended him for prestigious literary prizes, which he won. They dined out together, and he cooked elaborate French meals for her. But, White informs us, Sontag was “a terrible snob.” She lacked social skills and a sense of humor, and “she had terrible manners.”

The relationship fell apart when Sontag realized that a character in White’s novel Caracole was based on her. It was an unflattering portrait, and Sontag was furious. She demanded that her endorsement be removed from all future editions of A Boy’s Own Story, including foreign-language releases. White was crushed when the imperious culture queen exiled him from her court: “I suffered over our break and for years afterward I’d dream of a reconciliation.” Years later, when he encountered Sontag in a restaurant, she embraced him and laughed over their “silly little feud.” But when White saw her again the next day, she was distant, and he realized there was to be no genuine reconciliation.

White says that Sontag, who was close to a number of Nobel Prize-winning writers, should have won a Nobel. But he can’t resist a dig at her (admittedly a good one): “She should have been given the Nobel Prize. That would have made her nicer.”

Sontag was one of a number of high-profile gay writers and artists who downplayed or concealed their sexual natures. White both resents them for that and admires them for their savvy careerism. He instead became a founding father of the un-closeted, post-Stonewall gay literary movement. He confesses to some ambivalence about that: “It’s true that as a movement it did isolate us—to our advantage initially” because it carved out a niche and brought exposure, “but in the end . . . it served to quarantine us into a small, confined place.” Although “gay literature was every bit as interesting and varied as straight literature,” the label “gay writing” permitted critics and others to dismiss gay books as “being of special interest only to gay people.”