Story of My People 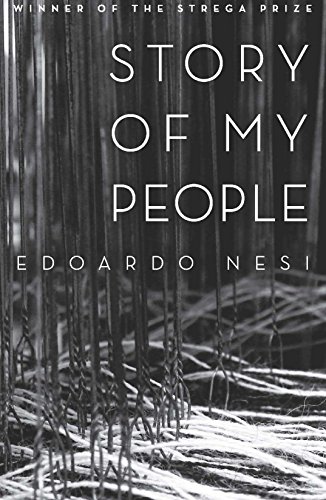 The worldwide movement of unbound corporate capitalism that has come to be known as globalization has generated an extensive and varied body of literature, some of it celebratory (the effusions of New York Times columnist Tom Friedman), much of it critical (the work of Naomi Klein, Joseph Stiglitz, and Susan George, among others).

But few have produced an account of globalization’s effects as personal, poignant, and beautifully written as Edoardo Nesi’s Story of My People.

The book, which in 2011 won the Strega prize, Italy’s most prestigious literary award, describes the wreckage caused by “free trade” on the textile industry of Prato, the author’s hometown in Tuscany. In 2004 after years of declining profits, Mr. Nesi sold Lanificio T.O. Nesi and Figli S.p.A., the textile firm his grandfather and great-uncle founded in the 1920s.

The company fell victim to globalization, unable to compete with Chinese manufacturers who produced textiles far more cheaply using exploited labor in China and in Chinese-owned sweatshops in Italy.

Before he took charge of the family business, Edoardo Nesi studied English and American literature in the United States. He is primarily a novelist (his fifth novel was published the same month he sold the company), and in describing what happened in Prato, he frequently refers to the work of American authors: Joan Didion, David Foster Wallace, Thomas Pynchon, Richard Ford, and especially F. Scott Fitzgerald. Mr. Nesi took the title of his book from a Fitzgerald quotation: “It is the most beautiful history in the world. It is the history of me and my people.”

Mr. Nesi recalls Prato as “an entire city based on the textile industry, dotted with dozens and dozens of companies just like ours.” The industry generated prosperity for families like the author’s and their workers, as well as social cohesion.

The crisis that in the 1990s struck Prato and the entire Italian textile industry was caused, says Mr. Nesi, by the “unfettered worldwide importation of Chinese fabrics.”

In the industrial sheds left empty by companies that have gone bankrupt, “one of the largest Chinese communities in all Europe has sprung up, a community that lives and prospers by giving work to illegal immigrants and sewing garments with fabrics that they import from China, because the fabrics that the Pratese mills make are too expensive, but they still therefore have every right to label their rags Made in Italy.”

In a chapter titled Sistema Italia (Italian System), Mr. Nesi delivers a devastating indictment of globalized capitalism, denouncing Italian politicians who signed the trade agreements “that would ultimately undermine Italy’s prosperity, with the enthusiastic support of our economists.”

The cheerleaders for globalization told Italians that the opening of the China market would be great for Italian products, which newly flush Chinese consumers would avidly buy. But what happened was that “the Chinese didn’t rush out to buy Italian style; they hurried out and produced it themselves,” copying Italian products and selling them “everywhere around the world, including China, for pennies on the dollar.”

With Prato’s industries under siege from both foreign imports and the cheap goods made in Chinese-owned sweatshops, the city becomes the site of warring impulses: tolerance and intolerance, acceptance and racism, integration and xenophobia.

Mr. Nesi vacillates between sympathy for the exploited immigrants and anger at the Chinese entrepreneurs who operate illegally, flouting Italian law.

He recounts a nightmare in which a 50-something worker he calls “Fabio,” laid off with only a few years to go until his retirement, gets into a violent encounter with a young Chinese man. Fabio seethes with rage, thinking “it was the Chinese who took my job from me.”

Mr. Nesi writes that this belief isn’t accurate, but “it might be fair to say” that the “Chinese who still are in China” did, “if we can describe as theft the guiding principle of our impoverished world . . . the exaltation and the absolute protection of the mobility of employment, our unanimous consensus that jobs should be allowed to cross all borders freely to move wherever labor is cheapest . . .”

Italy’s industrial system of smaller, family owned firms helped make possible its rise from the ruins of World War II to become a modern nation. Now, “millions of Italians . . . find themselves at the mercy of a brand-new, bloodthirsty, roid-raging version of the free market.”

Story of My People concludes with a deeply sad and moving account of a protest march in Prato, which becomes a metaphor for Italy and its intractable economic crisis.

Marchers assemble in the town piazza to carry a long banner dyed in the colors of the Italian flag that has been made from fabric woven in Prato. Edoardo Nesi joins his fellow Pratesi in the march, carrying the banner and being carried along by it, through the ancient streets of their declining town. “I’m not sure where we’re going,” he concludes, “but we’re certainly not standing still.”