A Freewheelin' Time: A Memoir of Greenwich Village in the Sixties 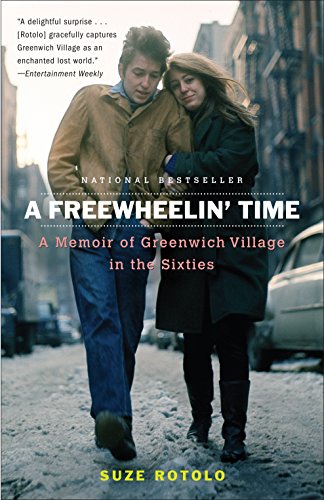 Suze Rotolo, the daughter of Italian communists who immigrated to New York, grew up in Queens but soon found herself in the bohemian milieu of Greenwich Village.

There, at 17 years old, she met a 20-year-old, transplanted Minnesotan, Robert Zimmerman, who had recently renamed himself Bob Dylan. (It's Rotolo who's arm in arm with Dylan in that famous album cover photo.)

More importantly, it was Rotolo who shaped Dylan's aesthetic sensibility, introducing him to music and theater, including Brecht and Weill, whose “Pirate Jenny” influenced his “When the Ship Comes In.”

Rotolo ended the relationship when she began to feel smothered by Dylan's fame. But she acknowledges that the years she spent with him have left an indelible imprint.

Her book, however, is about much more than her relationship with Bob Dylan. It's her idiosyncratic, wise, and very appealing memoir of the sixties, a decade whose incredible social, cultural, and political ferment continues to reverberate. It's also a different kind of Italian American story, one refreshingly free of the all too familiar cliches and stereotypes.

And, it's a woman's view of the sixties’ counterculture and New Left, movements that despite their radicalism could be very traditional (read: oppressive) when it came to gender and sexuality.