Among the Bloodpeople: Politics and Flesh 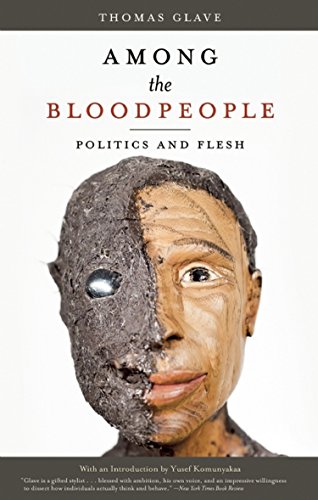 “. . . a fearless truth-teller whose essays in Among the Bloodpeople are fully, unhesitatingly engaged . . .”

Thomas Glave surely is one of the bravest of contemporary authors.

A fiction writer and essayist who deals in hard, discomfiting truths about sexuality and race, he was born in the Bronx of Jamaican parents and spent part of his youth in Kingston, Jamaica. He is an openly gay man who condemns, in elegantly searing and poetic prose, the ferocious homophobia rampant on the island advertised as a welcoming paradise in those tourism commercials, with their cheery Bob Marley tunes.

The late Mr. Marley may have sung about an all-embracing “one love,” but for Jamaican gays and lesbians, there’s little love, and much hate, ostracism and violence.

Mr. Glave’s new collection of essays, Among the Bloodpeople, bears witness to the oppression and suffering of Jamaicans like him, and takes on the institutions—family, church and state—that foster it.

The book’s opening piece, “The Jamaican Family: The Word, and Dreams,” notes that silence is one of the essential strategies of Jamaican homophobia. Jamaicans will openly discuss a range of topics, from the high rates of violent crime in Kingston to US foreign policy, but they will strenuously avoid acknowledging the existence of their gay family members, much less the way those kin are mistreated.

Mr. Glave writes with calm, concentrated anger about the hurt inflicted by “the bloodpeople: the people of shared DNA, shared genes and facial likenesses . . . The people of shared surnames that confirm the blood shared between you long after slavery and emancipation . . .”

“Speak with them about what the government can or cannot (or will not) do about the extreme crime rate, in Kingston especially, and share their disgust and horror overall of it, but do not—absolutely not—allude in any way to the various men-loving men whose throats were ripped open last year, or whose assorted parts were found splattered around the places in which, most commonly they had lived . . .”

“Speak with the family about the US’s presence in the Middle East: a safer subject. For you understood long ago that it would always be easier for them to deplore other people’s viciousness—the US’s, or Britain’s—before examining and correcting their own.”

Gay men and lesbians in many societies, not only Jamaica, choose to flee from the family and the homeland in order to survive. But Mr. Glave observes that the bloodpeople are those “whom you can never truly escape . . . and who, in spite of everything, you honestly do not yet really want—not quite—to escape.”

Mr. Glave has chosen to fight rather than flee. He helped found J-FLAG (Jamaican Forum for Lesbians, All-Sexuals and Gays), an organization he says provided a home, “of a kind,” for the island’s sexual minorities.

And in a particular bold move, he took on the homophobia of the Jamaican head of state, writing, in 2008, “An Open Letter to the Prime Minister of Jamaica.” In the piece, included in Among the Bloodpeople, he denounces Prime Minister Bruce Golding’s remark on BBC-TV that homosexuals would not “have any place” in his government.

The author reprimanded Mr. Golding for his “bigotry and narrow-mindedness,” with its implied assumption that “only some Jamaicans—heterosexuals, in this case—have the right to live in their country as full citizens with full human rights, while others—homosexuals—do not.”

Bruce Golding is no longer in office. In January 2012, Portia Lucretia Simpson-Miller was elected Prime Minister, becoming the first head of the Jamaican government to formally endorse civil rights for LGBT citizens. This indeed is progress, as Mr. Glave acknowledges, but anti-gay bigotry and violence are deeply rooted in Jamaican culture and politics.

In other essays, Mr. Glave candidly examines the allure and pleasure of “unprotected,” i.e., condom-less gay sex; directly addresses four great authors whose work has been vitally important to him, Nadine Gordimer, Audre Lorde, Toni Morrison and James Baldwin, whom he calls “Dear Sir, Dear Father;” and warns “against preciousness,” the “refusal” of some writers to “engage with what, in our violent, glorious, detonating and ever-renewing world, our world of geopolitics and constant scrabbles for power and dominion, so undeniably is.”

No one could ever accuse Thomas Glave of preciousness. He is a fearless truth-teller whose essays in Among the Bloodpeople are fully, unhesitatingly engaged with his and our world.