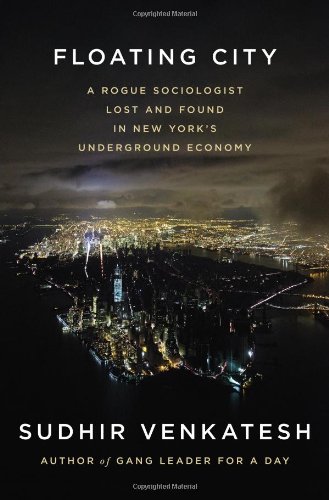 “We—mainstream society—cannot afford to ignore their needs and potential contributions.”

The subtitle of Sudhir Venkatesh’s new book is an apt and revealing one: Floating City is as much about its author, the titular “rogue sociologist,” as it is about New York’s underground economy and its low-income but perpetually hopeful strivers.

Though a fully credentialed, tenured professor of sociology at Columbia University, a prominent and respected figure in his discipline, Mr. Venkatesh often felt at sea while trying to enter, understand, and document the lives of his subjects, mostly drug dealers, prostitutes, and others connected to the sex trade.

In his critically acclaimed book from 2008 Gang Leader for a Day he described the operations of a gang of crack dealers in a Chicago housing project. Protected by a gang leader with whom he struck up a complicated friendship, he spent nearly a decade in the project, observing and documenting what he saw.

Mr. Venkatesh arrived in New York City in 1997, a time when “the forces of globalization and urban development [were] transforming every New York neighborhood.” The transformation—some say Disneyfication—of Times Square led by then-Mayor Rudy Giuliani was bringing in hordes of tourists while neighborhoods throughout the city were experiencing gentrification, as middle- and upper-class people were moving back to New York from the suburbs.

In Floating City Mr. Venkatesh portrays with insight and empathy the daily struggles of those in the subterranean economy. Focusing on several particularly compelling characters, he tells their stories, warts and all, presenting them in all their complex and messy humanity, never reducing them to journalistic or sociological stereotypes.

Though these men and women are the stars of Mr. Venkatesh’s engrossing narrative, he also presents the reader with a host of well-drawn supporting players, most of whom are connected—socially, sexually, economically—to the leads.

Disconcerted and confused by the complexity of New York—or “lost,” as his book’s subtitle acknowledges—Mr. Venkatesh figures out that the city requires “its own kind of sociology,” different from the approach he used in Chicago, which concentrated on “geographic areas as primordial units of socialization.” Shine tells him that he needs to “move around more” rather than immerse himself in one area, as he had done in the Chicago projects.

He decides that his research should focus not on neighborhoods but on networks, web-like attachments among “the underground economy’s hidden strivers” that were not limited by location, class or race. Shine counsels Mr. Venkatesh to follow his example and “float” among the different social strata connected through illicit commerce.

After researching New York’s underground economy and entering the lives of its participants, the rogue sociologist understands that, Shine’s advice notwithstanding, “most of the people who tried to float ended up sinking, especially if the measure of success was class mobility or economic advancement.” Most of them, he acknowledges, “were now either dead, isolated, stuck in some rut, or remaindered to daily survival with little but their regrets to sustain them.”

Their stories, however, are important, or “sociologically useful,” as Mr. Venkatesh, says, because each one is a thread that, when woven together with others, helps make sense of “a chaotic place like New York.” The stories of Shine, Manjun, Angela, and the others “put flesh back on” the abstractions of social science and “reveal the structure of the city itself.” And in global cities—not only New York, but also such vast metropolises as Sao Paulo, Accra and Shanghai—the underground economy is the only chance many have for survival.

We—mainstream society—cannot afford to ignore their needs and potential contributions.

That’s not exactly an original conclusion; other books, as well as fiction and documentary films, have told us the same thing. And Mr. Venkatesh’s hope that his research will influence public policy debates and contribute to political reform is shared by many other social scientists. What’s most compelling about Floating City is its textured and perspicacious portraits of New Yorkers trying to “float” in a city where it’s far easier to drown.