Keep On Pushing: Black Power Music from Blues to Hip-Hop 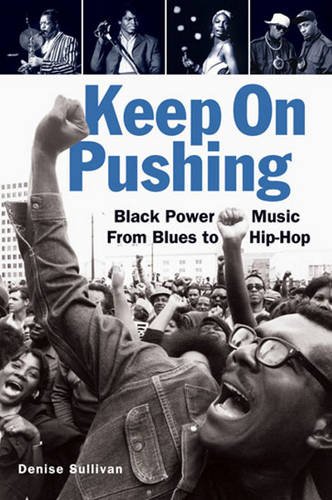 “Keep On Pushing celebrates the musical and activist legacy of the 60s and laments the current era, in which ‘there exists no one effective organized mass movement of people, marching and singing their way to solutions toward freedom and equality.’ . . . The problem isn’t that she’s chosen a journalistic approach . . . it’s that the book is often bad journalism: lazy, shallow, and riddled with banalities.”

Music has long accompanied social change movements, providing inspiration, encouragement, and emotional balm. Any movement worthy of the name has got to have good tunes. Keep On Pushing: Black Power Music from Blues to Hip-Hop examines the relationship between song and struggle since the Civil Rights movement of the 1960s, with African American musical art and activism serving as the template for successive developments in music and grassroots politics.

Author Denise Sullivan, a pop music journalist whose previous books include titles about The White Stripes and R.E.M., notes that “The civil rights movement . . . has been well documented; plenty has also been written on the connection between the gospel and soul music that immediately followed in the new era of black pride and consciousness. Less documented is the collective exploration of cultural heritage and identity, the pride, power, and political changes identity creates, and music’s key role in those explorations and changes.”

Keep On Pushing—the title comes from the classic uplift anthem recorded in 1964 by Curtis Mayfield and the Impressions—celebrates the musical and activist legacy of the 60s and laments the current era, in which “there exists no one effective organized mass movement of people, marching and singing their way to solutions toward freedom and equality.”

During Ms. Sullivan’s halcyon decade, folk singers like Odetta and Bob Dylan, modern gospel artists like The Staples Singers, rhythm and blues vocal groups like The Impressions, and free jazz instrumentalists like Ornette Coleman and Archie Shepp, all contributed their talents and commitment to create a “soundtrack to liberation.” The intersection of music “with political and social events in the sixties has not been matched since,” observes Ms. Sullivan.

“The songs of black liberation are about pulling together as a people in the name of survival. The songs ask listeners to join together and do something,” Ms. Sullivan writes. “Though some music from the sixties sounds dated and clearly belongs to the psychedelic era, the music rooted in black liberation is unbound by time. It is always relevant, any time or any place in the world where people are broke and hungry and in need of relief.” Such socially committed music “remains essential now—in a time of war, economic disaster, health crises, and ecological emergency.”

All have thoughtful, revealing and sometimes startling things to say about the role of music in political struggle and in the development of their own political ideas and social identities. Phranc, for example, articulately explains how her decision to perform as a solo folk artist was for her inextricable from her lesbian feminism.

But the interviews, though often interesting, can’t compensate for the book’s weaknesses: clumsy writing, factual inaccuracies, and a lack of a sound intellectual framework to give context and coherence to Sullivan’s treatment of a very disparate group of music-makers.

Too much of Keep On Pushing amounts to a superficial survey of developments that merit more thorough and informed discussion. Sullivan devotes exactly one page to the big musical charity events that were staged during the 80s and afterwards: Farm Aid, Live Aid, Live 8, the benefits for 9/11 and Hurricane Katrina relief—but misses the opportunity they present to critically examine the relationship between the music industry, the media, and social change/social justice movements.

The book’s stylistic infelicities are many. The brilliant, soul-stirring Staples Singers are called “longtime trench-marchers.” Another artist’s approach is described as a “fascist-fighting folker’s impeccable style of oration.” On Sly and the Family Stone’s album There’s a Riot Goin’ On, Sylvester Stone “set about painting the odd pictures that turned out to be his most masterpiece.” Noting the decline of the 60s counterculture, Ms. Sullivan writes, “. . . at the end of 1969 the peace-and-love colored children who created Woodstock were lost in a world that was starting to turn a terrible shade of hate.”

Discussing politically engaged women artists, Ms. Sullivan claims that Yoko Ono “and another number [sic] of women with strong humanist and political voices had effectively been silenced.” Which women? How were they silenced, and by whom or what?

The author inaccurately describes the Parents Music Resource Center (which she mistakenly calls The Parents Resource Music Center) as “a government committee established primarily to censor music.” The PMRC was founded in 1985 by Tipper Gore, then the wife of Senator Al Gore, but it was not an official government body. The committee’s ostensible purpose was to give parents greater control over the music their kids listened to—the impetus for its founding was Mrs. Gore’s horror over Prince’s “Dear Nikki,” with its reference to masturbation. Its main accomplishment was the warning stickers that recording companies pasted on CDs alerting consumers to raunchy or violent content.

Those stickers now generally are seen by music consumers as signifiers of street cred; no rapper or edgy rocker wants to be without one. The PMRC hardly was the House Un-American Activities Committee of pop music.

Speaking of rap, Ms. Sullivan’s discussion of that enormously influential genre is sketchy and unsatisfying. She (mostly) approves of Public Enemy, but doesn’t explore the connections (or disjunctures) between their radical sonic innovations and their social commentary.

And for a writer critical of sexism and homophobia and attuned to feminism, she has little to say about PE’s sexual and gender politics, which were considerably less progressive than the group’s perspectives on race and racism. She instead devotes much more space to Michael Franti, a rap-rock artist who is more politically correct than Chuck D and his crew, more in synch with Sullivan’s ideas about “liberation music,” but nowhere nearly as important in the genre’s history.

The “Get Up Stand Up” section—six pages in which Ms. Sullivan surveys politically engaged music made outside the U.S.—easily could’ve been cut to keep the book’s focus on the United States. Her observations about two of the most important cultural figures to emerge from the so-called Third World, Fela and Bob Marley, have a canned, second-hand quality, as if Ms. Sullivan cribbed them from old media accounts.

As well, she has nothing new or interesting to say about the Nigerian creator of Afrobeat and uncompromising political gadfly or about the mixed-race Jamaican who introduced reggae and Rastafarianism to a global audience. She writes that Haile Selassie, the Ethiopian emperor whom Rastas like Marley worshipped as God incarnate, “taught suspicion of Babylon or Western culture.”

This is laughable. Selassie was a feudal despot who rejected the mantle of divinity that Rastafarians tried to place on his diminutive frame. He never “taught suspicion” of “Babylon”; it was the Bible-infatuated Rastas themselves who came up with that name for Western capitalist civilization.

But the biggest shortcoming of Keep On Pushing is its author’s failure to theorize the connections between music and social change, and the intersections of art, politics, and social identities. Denise Sullivan is apparently unacquainted with Antonio Gramsci, the great Italian theoretician of culture and radical politics, or the many thinkers influenced by him, like Britain’s Stuart Hall, a preeminent scholar of popular culture.

Lacking any sort of critical apparatus, Gramscian or otherwise, Keep On Pushing has a random, scattershot quality, and Sullivan’s attempt to link the many diverse artists she writes about under the rubric of “liberation music” can’t compensate for that lack. The problem isn’t that she’s chosen a journalistic approach, since so much brilliant writing about popular music has appeared outside the academy, in newspapers, magazines, and now on the Web, it’s that the book is often bad journalism: lazy, shallow, and riddled with banalities. (Ms. Sullivan admires musicians, and political intellectuals like Cornel West, who “have chosen to celebrate life.”)

The artists she profiles and the movements they championed deserved better.