A Colossal Wreck: A Road Trip Through Political Scandal, Corruption, And American Culture 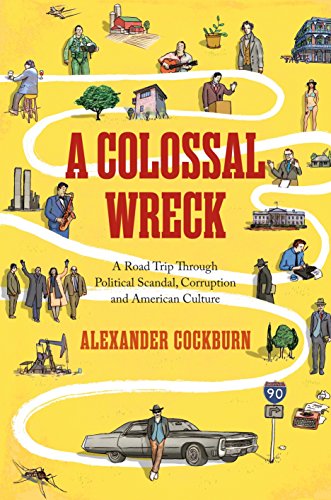 Alexander Cockburn made most political commentators look like timid purveyors of conventional wisdom and comforting clichés—even, or maybe especially, those who called themselves progressives. The Irish-born Mr. Cockburn, who died in 2012, arrived in the United States in 1972 and almost immediately shook up American journalism.

He was ideologically Marxist, though hardly dogmatic or sectarian, and he wrote with ferocious wit and deep erudition. His writing enlivened the liberal Democratic Party fanzine The Nation and the Village Voice when the paper still was an “alternative” weekly.

Like a revolutionary invading a corporate board meeting, he even raised his voice on the reactionary op-ed pages of The Wall Street Journal, where he had a column for several years. In recent years, he wrote mostly for Counterpunch, the newsletter and website he co-edited with Jeffrey St. Clair.

A Colossal Wreck, his final book, is a collection of miscellany written between 1995 and 2012, with the last section completed just days before his death from colon cancer at age seventy-one. It’s a long book, and not everything compels the reader’s interest. But at its best, Mr. Cockburn’s reflections on 18 years of “political scandal, corruption and American culture” remind us of what journalism, and especially radical journalism, always at the margins of the American “conversation,” lost with his passing.

Right wingers liked to call Alexander Cockburn un-American, but the writer, who became a U.S. citizen in 2009, loved America and Americans—perhaps too much. In his later years, he showed a soft spot for some forms of conservative populism, gun culture and climate change denialism.

As a libertarian-leaning radical, he despised America’s corporate and political elites. He regularly excoriated the Right but also Democrats, for failing to be a truly progressive party.

In his 2006 book, Democrats in End Time: The True and Terrible Story of How the Dems Blew it and What Comes After, he observed, “these days the Democratic Party is an ATM machine supervised by corporate flunkeys and fuelled by union leaderships and corporations. Nothing much else. It's not a party in what used to be understood by that word.”

In A Colossal Wreck Mr. Cockburn provides plenty of scathing takedowns of the Democrats—especially Barack Obama and Joe Biden.

In 2008 when liberals and even leftists were hailing the one-term Illinois senator as their progressive avatar, Mr. Cockburn wrote, “Abroad, Obama stands for imperial renaissance. He has groveled before the Israel lobby and pandered to the sourest reflexes of the cold war era. At home he has crooked the knee to bankers and Wall Street, to the oil companies, the coal companies, the nuclear lobby, the big agricultural combines. He is even more popular with Pentagon contractors than McCain . . . He has been fearless in offending progressives, constant in appeasing the powerful.”

Mr. Cockburn approved, in a sense, of Mr. Obama’s choice of Joe Biden as his running mate. “Since Obama is himself a corporate serf and from day one in the US Senate has been attentive to the same masters that employ Biden, the ticket is well balanced, the seesaw with Obama at one end and Biden at the other dead-level on the fulcrum of corporate capital.”

But the Obama-loathing pundit hardly lets the GOP off the hook: “A Republican Treasury Secretary from Goldman Sachs bails out the banks and all McCain and the right-wing talk show hosts can do is howl that the rather conservative and economically right-centrist Obama is a ‘socialist.’”

He also skewers the Republicans for their pandering to racism and intolerance. In April 2012 he wrote, “What is it that prompts Republicans to try so hard to alienate women, blacks, Hispanics, independents, and all those millions and millions of Americans to the left of the Tea Party they’ll need to beat Obama? Maybe they feel it’s their last throw. All the demographics look unfavorable for any future Republican majority. So there is a desperate effort to get everything they can right now. Conning working class whites with racism, sexism, anti-gay/anti-immigrant rhetoric, etc. has worked so well since Nixon that it’s become an addiction.”

Elsewhere Mr. Cockburn denounces America’s corporate elites (“a group utterly vacant of the most elementary instincts of social propriety, devoid of moral fiber, selfish to an almost unfathomable degree”), sympathizes with the Occupy Wall Street movement while criticizing its political naïveté, and tells of his love for the automobiles Detroit made in its heyday and for driving them “on scrubby old state highways, warm with commercial life.” (Politics wasn’t everything for Alex Cockburn.)

The late Christopher Hitchens, the British Trotskyist turned neoconservative pundit, a former friend and ex-colleague at The Nation, comes in for some of Mr. Cockburn’s most sulfurous criticism. To Mr. Cockburn, Hitchens never really was a radical but rather someone who “craved to be an insider, a trait which achieved ripest expression when he elected to be sworn in as a US citizen by Bush’s Director of Homeland Security.”

“Hitchens,” he adds, “never wrote anything truly discommoding to respectable opinion and if he had he would never have enjoyed so long a billet at Vanity Fair.”

Alexander Cockburn, of course, consistently discomfited respectable opinion, and he did so brilliantly and with style. He could be erratic and sometimes wrongheaded, but his was a unique and irreplaceable voice that his admirers, including this reviewer, greatly miss.