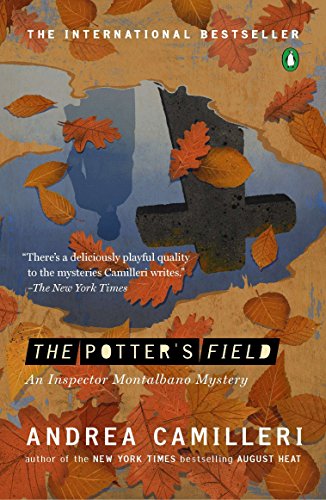 “All the elements that fans of the Inspector Montalbano series have come to expect are present in The Potter’s Field: a brutal crime that challenges Montalbano and his team, sharply drawn characters representing a broad swath of Sicilian society, social and political commentary, droll comedy, and gastronomic interludes.”

Salvo Montalbano is a fictional character invented by the Sicilian author Andrea Camilleri, the protagonist in a series of popular mystery novels. But Montalbano, the chief of detectives in Vigàta, a fictional Sicilian town, is such a vivid and memorable character that even his creator talks about him as if he actually existed.

Camilleri has called the chief inspector a “serial killer of characters” because he has developed a life of his own and demands so much attention from the author that Camilleri can barely find the time to write other books with different protagonists. He complains, ironically, that he has to keep writing the Montalbano novels just to appease the demanding detective. Once he’s finished another one, Montalbano allows him to pursue other literary interests.

The Potter’s Field is the 13th installment in the Inspector Montalbano series, which began in 1994 with The Shape of Water. It is not, however, the latest title. Written in 2008, it has just been published in an English translation by Stephen Sartarelli, who has superbly rendered all the books from Camilleri’s Sicilian-inflected Italian into brisk, idiomatic American English that preserves the author’s wit and irony.

(Mr. Camilleri, an extraordinarily prolific author who is now 86, has written seven more Montalbano novels that have yet to be translated.) The novels are bestsellers in Italy, where they have been adapted for a series of popular TV movies. In translation, the books have a fervent following among not only among Anglophone readers but also in Germany, France, Greece, Japan, the Netherlands, Sweden, Spain and Portugal.

There’s no mystery about the international popularity of the Montalbano novels: they are exceptionally entertaining, true page-turners and highly addictive. Though they are ingeniously plotted, narrative structure is not their main attraction. Setting (contemporary Sicily, with its beguiling mix of tradition and up to the minute modernity) and characterization (Montalbano, the members of his crew, and the diverse cast of Sicilians, criminal and law-abiding) generate most of the series’ considerable pleasures.

Salvo Montalbano shares a number of attributes with his creator. The chief inspector in Vigàta, which is modeled on Mr. Camilleri’s hometown of Porto Empedocle, is, like the author, an unrepentant smoker, an ardent gourmand, an atheist, and, surprisingly for a police official, a left-winger contemptuous of his homeland’s conservative institutions—its government, the Catholic Church, and a certain criminal organization for which Sicily unfortunately has become notorious.

Montalbano can be brusque and ornery, but he has a strong ethical code and passionate commitment to justice. He is cultured, with a fondness for literature, and he is mad about food—cucina siciliana to be exact. When Montalbano isn’t working on a case, he’s eating, whether the home cooking of his devoted housekeeper Adelina or the seafood at his friend Enzo’s trattoria. After consuming one of Enzo’s glorious, multi-course repasts, Montalbano likes to walk from the restaurant to a jetty, where he sits gazing at the sea while puzzling over the details of whatever crime he is investigating. Digestion and ratiocination are inseparable for this detective.

Montalbano, a bachelor, has a girlfriend, the long-suffering but patient Livia, who lives not in Sicily but in a suburb of Genoa. Their relationship endures despite distance and Salvo’s frequent inattentiveness (he’s more focused on work than romance), but in the more recent books Livia seems to have given up on matrimony.

All the elements that fans of the Inspector Montalbano series have come to expect are present in The Potter’s Field: a brutal crime that challenges Montalbano and his team, sharply drawn characters representing a broad swath of Sicilian society, social and political commentary, droll comedy, and gastronomic interludes. Besides the inspector himself, the other familiar characters include his closest associates, the detectives Domenico “Mimì” Augello and Giuseppe Fazio; the syntax-mangling, idiot savant cop Catarella; the police bureaucrats Alderighi-Bonetti and Dr. Lattes; the hilariously rude and profane coroner Pasquano; Livia, Ingrid, and Adelina.

But there’s something new: Montalbano is now approaching 60, and he fears that his physical and intellectual powers may be waning with age. A longtime swimmer, he is overcome in the rough sea off his beachfront home and has to be rescued by a fisherman, who chastises him for his recklessness. Haunted by his encroaching mortality, he wonders how much longer he can remain the brilliant and indefatigable crime fighter.

The Potter’s Field begins with a bizarre dream in which Montalbano discovers that the Italian government has been taken over by the Mafia and that the new head of state is Totò Riina, a real-life Mafia boss who currently is serving a life sentence in Italy. Riina tells Montalbano that he will appoint other high-ranking mafiosi to his cabinet, and he offers the detective the position of minister of the interior. Montalbano’s nightmare might seem surreal, but it’s an all-too-credible bit of political satire, since collusion between La Cosa Nostra and high-ranking elected officials—including the country’s current embattled leader—has long been a fact of life in Italy.

The plot kicks into gear when a woman, a gorgeous and distraught Colombian, visits Montalbano to inform him that her husband is missing. Then Montalbano and his men discover a large plastic bag containing a corpse that had been hacked into 30 pieces. The dismembered body is found in an area, called u critaru in Sicilian, where soil is mostly clay. It is literally a “potter’s field” because the property’s owner sells the clay to potters, figuratively so because it serves as a graveyard for the murder victim.

The remains are identified as those of Giovanni Alfano—the husband of the beautiful Colombian. Alfano, it turns out, was a ship’s officer whose father had been a cocaine dealer in the employ of the local Mafia chief, the aged Don Balduccio Sinagra. The mafioso had ordered the murder of the elder Alfano, and Montalbano and his crew have reason to consider him the prime suspect in the son’s death.

Andrea Camilleri has said that he deplores cinematic and literary portrayals of mafiosi as charismatic, even mythic figures who may do bad things but are devoted to their families. Though he loathes that sort of distorting sentimentality, with the character of Balduccio Sinagra he has created an old-school mafioso whom he distinguishes from the new breed of organized criminals that emerged in the 1980s. Sinagra is a crook and a killer, but one whose mentality and behavior are familiar and comprehensible.

Montalbano believes that the murder was committed by “someone who still operated in observance of the rules of the ‘old’ Mafia” because “the new Mafia fired their guns pell-mell and in every direction, at old folks and kids, wherever and whenever, and never deigned to give a reason or explanation for what they did.”

“With the old Mafia, it was different. They explained, informed, and clarified. Not aloud, of course, or in print. No. But through signs. The old Mafia were experts in semiology, the science of signs used to communicate.” Montalbano believes that by chopping Alfano’s body into 30 pieces, the Mafia was sending a message: “they killed him because he had betrayed them for thirty pieces of silver, like Judas.”

But is Montalbano reading the signs correctly? And was it indeed the Mafia that sent them? Here this reviewer must observe omertà, the Cosa Nostra code of silence, and say no more.

Organized crime is no laughing matter, but it inspires one of the funniest scenes in any of the Montalbano novels. The inspector decides to pay a visit to the local offices of the national Antimafia Commission to discuss the murder of Alfano and his suspicions about Sinagra’s involvement. There he meets with the Commission’s director and an aide who, during the meeting, morph into a Sicilian version of Laurel and Hardy, peppering him with absurd questions until he’s on the verge of exploding in exasperation.

But even in comic mode, author Camilleri is deadly serious: the director of the Commission needs his trusted aide as a witness to Montalbano’s interview because “Given the ties between the Mafia and the upper echelons of business, industry, and government, it was best to cover one’s ass and proceed with caution.”

There’s yet another, related mystery Montalbano must unravel. Why is detective Mimì Augello behaving so strangely toward the inspector and his other colleagues? He is constantly angry, resentful, and hostile, so much so that everyone avoids him. And why does he insist that Montalbano transfer the “potter’s field” case to him?

Suffice it to say that the resolution of both mysteries, Alfano’s murder and Augello’s peculiar behavior, is surprising and satisfying, making The Potter’s Field one of the best installments in the entire Inspector Montalbano series.

George de Stefano is an author, critic, and blogger whose work has appeared in many print and online publications, including The Nation, PopMatters, Rootsworld, Cineaste, Film Comment, the Gay and Lesbian Review Worldwide, the Advocate, I-Italy, and others. He is the author of An Offer We Can’t Refuse: The Mafia in the Mind of America (Faber and Faber/Farrar, Straus, Giroux) and a contributor to The Essential Sopranos Reader (University of Kentucky Presses, 2011) and Mafia Movies (University of Toronto, 2011). He is a member of the Author's Guild and the National Book Critics Circle.