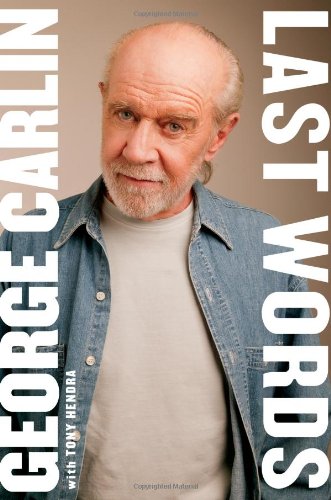 Not too many autobiographies begin with the author sliding down the birth canal. In fact, I can’t recall ever having read any author describing his entry to the world as “landing in the freshly shaven crotch of a screaming woman.” But then, Last Words is George Carlin’s autobiography, and a more decorous account just wouldn’t do. Moreover, as Carlin informs us, he almost never saw the light of day: he was an unwanted baby, conceived during a “single isolated sexfest” between his separated parents, his 40 year old mother Mary and alcoholic, 48 year-old father Patrick.

Not only that: his mother nearly aborted the fetus that became America’s premier social satirist, changing her mind at the last minute because she had a vision while waiting her turn in the doctor’s office.

From this inauspicious 1937 debut to his 2008 death at 71 from heart disease, George Denis Patrick Carlin struggled to find his place in the world, which for him meant finding his authentic voice as a comedian. To achieve that, he had to do battle, with oppressive and unreasonable authority, but also with his own demons of drinking and substance abuse.

Carlin candidly and self-critically recounts his life’s setbacks, joys, and triumphs in Last Words. The book actually is collaboration between Carlin and his friend, the comic and author Tony Hendra, who completed the manuscript after Carlin’s death from many hours of taped interviews.

Hendra, who first met Carlin in 1964 when they both were stand-up comedians working in Greenwich Village, has done a fine and unobtrusive job of crafting the book: the only voice you hear is Carlin’s, and it comes through loud and clear, in all its idiosyncratic, iconoclastic force. Though the book suffers from some repetitiousness, particularly in its later chapters where we’re told far too often how much Carlin loves being on stage, Last Words is overall an engaging and often compelling read.

Carlin vividly evokes his pre-World War II Manhattan boyhood. Before his birth the Carlins had been affluent, thanks to his father’s successful advertising career. But the senior Carlin’s alcoholism cost him his job and the family’s upper middle class lifestyle. His parents split shortly after George’s birth and Carlin grew up fatherless.

Carlin spent much of his youth in the streets of his Upper West Side neighborhood, a working class and predominantly Irish Catholic enclave known as “White Harlem.” Young George loved his neighborhood, but unlike some of his peers he was no ethnic tribalist. He enjoyed venturing far from White Harlem; as a small boy he already was taking subway rides all over the city. To him, New York was “an urban El Dorado, just sitting there waiting for an adventurous child.” These early explorations can be seen as a metaphor for his entire life and career: though grounded in a particular ethnic and class culture that sustained him through his life, he never limited himself to it; he always was restless, craving new experiences and new knowledge.

After completing Catholic high school—a progressive Jesuit institution that followed the educational philosophy of John Dewey rather than that of a repressive, ruler-wielding Sister Mary Ignatius—George decided college wasn’t for him. He had already mapped out his future with a three-stage plan: first, he’d become a successful radio disk jockey, then a standup comedian, and finally, an actor.

He joined the Air Force at 17, not out of patriotism or an attraction to the military life but with the hope of “using the GI Bill to train myself as a disk jockey at a disk jockey school.” Stationed in Shreveport, Louisiana, deep in the racially segregated South, he befriended black airmen, and ended up running afoul of Southern racism and the Air Force’s rules and regulations. Post-discharge, he became a successful radio DJ in Boston, where he teamed up with another ambitious Irish American comedian, Jack Burns. The men were close, and attained some success as a comic duo, but they split up after barely two years; Carlin admitted he wasn’t giving his all to the act, and was keeping his best material for himself.

During the 1960s he tasted success as a standup comedian, but he was embarrassed by it. “The sixties were my nice years, my nice suit, my nice collar, my nice tie, my nice haircut—and my nice material,” he recalled. He was often scathingly funny about the era’s comedy and variety TV shows—he was particularly bilious about Ed Sullivan—and he served up some raunchy anecdotes about two of the era’s most squeaky-clean stars, the singers John Davidson and Jimmy Dean.

But the 60s found him trying to break out of the clean-cut mold to become an edgier comic, one more in sync with the decade’s cultural and political ferment. He performed at the fabled Greenwich Village club, the Café Au Go Go, home to the satirist Mort Sahl, musicians like Stan Getz and Nina Simone, and an up and coming young black comic named Richard Pryor. But even so, Carlin acknowledged that he  “didn’t feel free onstage. . . . I was constricted, a very Protestant-Catholic comedian.”

His transformation came in the 70s; the clean-cut, shorthaired comedian in slick suits remerged as a blue-jeaned, bearded hippie, his long hair gathered in a ponytail. During the decade, he won a mass audience with his shows and acclaimed comedy albums. But he and his wife Brenda nearly killed themselves with alcohol and cocaine abuse. His long-lasting tax problems began in the 70s, too, a consequence of bad business decisions and careless spending.

Always in search of a medium that would allow him complete creative freedom, he found it with Home Box Office. HBO offered freedom from censorship and imposed creative discipline—he had to come up with an hour’s worth of new material for each of his shows. He wrote that his 1990 and 1992 HBO specials “were when things really gelled.” He cited in particular his 1990 routine, “Rape can be funny,” which did not make light of rape itself, but instead savaged men, and especially the excuse given by rapists that their victims were “asking for it.” Carlin said that “keeping the focus on what pricks men are proved my point: that you can joke about anything—even rape.”

In his HBO shows Carlin mercilessly and hilariously exposed the hypocrisies of religion and politics, his barbs aimed squarely at the powerful: the government, police, censors, racists, and bigots. He delivered brilliant routines that dissected, often in minute, even obsessive detail, the uses and misuses of language.

But, for this writer, some of Carlin’s late material is problematic. Iconoclasm began to curdle into old man crankiness. Misanthropy—and misogyny—started to seep into his comedy. He mentioned a routine about bulimia he did in one of his HBO shows. I remember that bit well, and was put off by Carlin’s cruel mocking of young women with eating disorders. In his routine on rape, Carlin got laughs not at the expense of women—the victims—but by excoriating men. In the case of the bulimic young women, however, he couldn’t muster the imaginative sympathy to see them as victims, too. Yet he tells us that he did extend that consideration to white, working class men who parrot right-wing ideology.

Also off-putting was his repeated, and tiresome use of his favorite Anglo-Saxonism, “cocksucker.” (He uses it frequently in Last Words, too.) This, for Carlin, apparently was the worst thing one man could call another. He never considered that the epithet might be a slur, even hate speech; he instead reveled in what he saw as its transgressive power.

Carlin did not acknowledge it, but it seems to me that much of the bitterness and misanthropy of his late work was that of a disappointed idealist who passionately wanted human beings to be better.

Carlin’s health precipitously declined after a 2005 heart attack. He never completed his autobiography, or the Broadway show—modeled on Lily Tomlin’s acclaimed “Signs of Intelligent Life in the Universe”—that he envisioned as the capstone of his career. He planned to call it “New York City Boy.”