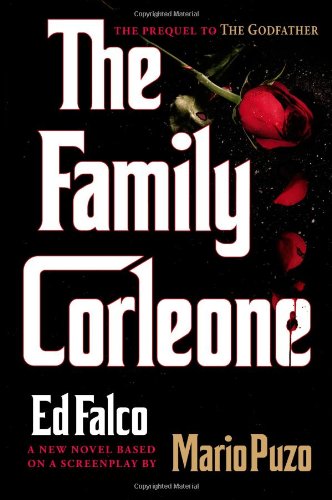 In The Family Corleone, Ed Falco deftly pulls off a feat of literary necromancy, bringing back to life one of the most iconic figures in American popular culture: Don Vito Corleone.

Working from a screenplay by the late Mario Puzo, Falco, a novelist and playwright, he has crafted a credible narrative of the Sicilian immigrant’s rise to leadership of the Italian-American underworld. It’s the story of how Vito Corleone became Don Corleone—the Godfather origin story that Puzo left underdeveloped in the original novel.

Puzo was self-deprecating about the literary quality of The Godfather, but he recognized that in the figure of Vito Corleone he’d created a truly mythic character, one that seems less a gangster than a wise lawgiver or an emperor. Even the surname assigned to him at Ellis Island marks him as exceptional—Corleone means “lionheart.”

Vito, in both Puzo’s novel and the first Godfather film, certainly seems like an aristocrat of the underworld, especially compared to the heads of the other New York crime “families.” Unlike him, they not only have few reservations about violence but revel in it, and are ruled by their violent passions. Vito regards himself as a businessman who sometimes has to play rough given the nature of his business and his competitors. His sons, he vows, will not go into his way of life and instead will succeed in legitimate business and politics.

But the sins of the Godfather are visited on his sons and the rest of his family; the story of la famiglia Corleone is a domestic tragedy and an allegory for the dark side of the immigrant experience and American capitalism.

The Vito of Ed Falco’s The Family Corleone is certainly consistent with the characterization in Puzo’s novel and Coppola’s film. Mr. Falco gives us Vito’s analytical intelligence and cunning, his straitlaced nature, his devotion to his family and friends, and his rationalizing of murder as something he must occasionally—and reluctantly—order to protect family and friends.

Mr. Falco also provides the genre essentials, without which the novel wouldn’t work as mafia narrative or as a commercial proposition. There’s the ethnic color, the ceaseless scheming and treachery, and of course the violence, baroque and ghastly.

About the only aspect of the Puzo template Falco resists is the explicit sexuality. Sonny Corleone is as randy and well endowed as in the original novel, but author Falco is much more reticent on these matters than Puzo. There’s nothing as outré in Mr. Falco’s novel as Puzo’s subplot involving Lucy Mancini’s oversized vagina.

The novel begins in the waning years of Prohibition, with gangsters, both Irish and Italian, fighting to control of what’s left of the trade in bootleg booze while establishing new profit centers.

The top dog of the New York mob isn’t Vito Corleone but Giuseppe Mariposa, who unlike Vito is all appetite—for women, booze, and drugs. Violence isn’t a necessary evil for Mariposa, it’s sport—he enjoys humiliating and torturing his victims before he eliminates them.

Mariposa is in a particularly foul mood because some gang has been hijacking his liquor shipments and selling them to another gangster. The leader of the hijacking gang is none other than Don Vito’s eldest boy, Sonny, whose confederates are an ethnically mixed crew of Italians, Irishmen, and a Greek.

It is 17-year-old Sonny who is the repository of Vito’s hopes for respectability; Michael, a studious and idealistic 13-year-old boy, is a minor character. When Vito learns that it is Sonny who has been ripping off Mariposa’s booze, he reluctantly brings him into his organization, forcing the young hothead to submit to the stern tutelage of Peter Clemenza. Sonny chafes at Clemenza’s discipline, but he couldn’t be happier to be working for his father.

In one of the novel’s most effective scenes, Sonny tells Vito that as a boy he witnessed a murder committed by his father’s henchmen Tessio and Clemenza with his father present. He tells Vito, “I know who you are and what you are”—a gangster who has people killed. Vito insists he is that he is no gangster but rather a businessman who sometimes must resort to violence. Sonny sees through Vito’s self-flattering rationalization, but he doesn’t care: He wants his father’s life—not the respectability his father craves.

Godfather fans will be happy to reencounter other familiar denizens of Puzoland: the Falstaffian Clemenza and the gloomy Tessio; Tom Hagen, the Irish-German orphan taken in, though never formally adopted, by the Corleones; pop singer Johnny Fontane; Frankie Pentangeli, a rival mobster who joins the Corleones, and the fearsome hit man Luca Brasi.

Mr. Falco makes Brasi a central character, recreating the horrific crime—the murder of his infant son—depicted in Puzo’s novel. He also devises a plausible scenario to explain how Brasi became the slow-talking, dimwitted killer we remember from the first film, as portrayed by Lenny Montana, the former professional wrestler that Coppola cast in the part.

The Family Corleone builds to a preordained but nonetheless satisfying denouement: the showdown between Vito Corleone and Mariposa.

With the war concluded, Vito consolidates his power. Magnanimous in victory, he calls a meeting of the heads of the “five families” at which he informs them that he will be a just leader who will ensure a stable business climate so that they all prosper. Their friends will be his friends, he promises, their enemies will be his enemies. Disputes will be resolved by a commission rather than by murder. The assembled dons accept Vito’s proposals, and his leadership. He now truly is The Godfather.

The scene foreshadows one of the most famous in Puzo’s novel and in the first film: the meeting at which Vito informs the other dons that he wants no part of the lucrative narcotics trade.

That get together, as all Godfather devotees know, didn’t go so well for Don Corleone.