Nine Lives: My time as MI6's top spy inside al-Qaeda 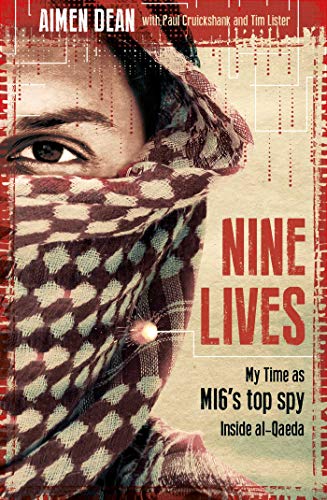 “. . . be forewarned: The war against radical Islamic terrorism has no end in sight. This is a war of ideas, not a war of attrition.”

Aimen Dean’s life could have ended way back in 1995. In that year, Dean, a resident of Khobar, Saudi Arabia but a teenager with Bahraini citizenship, journeyed to the warzone of Bosnia. Inspired by his reading of jihadi literature, especially the work of Egyptian philosopher Sayyid Qutb, Dean committed his life to defending Muslims across the world.

This oath led Dean to seek “martyrdom” not only in the trenches of Bosnia, but also in the jungles of the Philippines, and the mountains Afghanistan. While in Central Asia, Dean swore bayyat, or allegiance to the Sheikh. The Sheikh was none other than Osama bin Laden.

From 1995 until 1999, Dean was a serious Islamist who believed in using violence to attack the enemies of his religion. At one point, Dean was even one of the most important members of al-Qaeda’s chemical and biological weapons operation. In this capacity Dean met some of the biggest names in international terrorism.

Dean’s commitment to jihad began to weaken as early as 1995. In Bosnia, which Dean refers to as the cradle of the modern jihadist terrorism, Dean’s consciousness began to eat at him when he saw a fellow Arab Muslim decapitate Serb prisoners. Three years later, Dean made the decision to abandon al-Qaeda after the suicide truck bombings at the U.S. embassies in Nairobi, Kenya, and Dar es Salaam, Tanzania. For Dean, no amount of theological justification could excuse the cold-blooded murder of innocent civilians or the use of suicide attacks.

Nine Lives is an endlessly fascinating portrayal of al-Qaeda and the jihadist movement before and after 9/11. Dean, who became one of the best secret agents in the employ of Britain’s MI6 organization, takes his readers through the minds and beliefs of some of the world’s most vile people.

Also, Dean’s book is not afraid to point out the flaws of the West’s response to terrorism, from the incendiary and unnecessary invasion of Iraq in 2003 to the cowardice of British politicians who do not want to admit that second- and third-generation Muslim immigrants are not assimilating. Ultimately, Nine Lives claims that there is only so much the West can do to combat jihadism. It is Muslims themselves, Dean says, who have to honestly admit that there is something rotten at the fringes of their religion.

Nine Lives is a thrill ride of an autobiography. This book mostly lets readers in on the secret inner workings of al-Qaeda—their plots to use chemical weapons on New York’s subway system, their plans to spark a civil war in Saudi Arabia, and their ardent belief in fulfilling ancient Muslim prophecies about the apocalypse.

Nine Lives is also an exquisite portrait of what it is like to be a secret agent caught in limbo between the West and the Middle East. Dean’s tale is a harrowing one and should be an eye-opener to any armchair pundit who thinks that the War on Terrorism is an easy fix.

Nine Lives is a must read for anyone who seriously wants to end the scourge of jihadi terrorism in the West and the East. While Dean notes with sadness that the United State and Great Britain and their intelligence services are often let down by politicians, he does offer some advice on how radicalization among Muslim youth can be counteracted. But be forewarned: The war against radical Islamic terrorism has no end in sight. This is a war of ideas, not a war of attrition. In order for the West to win, it needs to find more ex-jihadists like Aimen Dean.