Find You First: A Novel 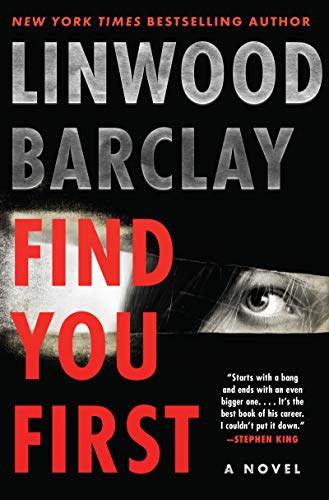 “Compelling from beginning to end, Find You First will keep Barclay’s fans on the lookout for his next thrilling ride.”

On page 201 of the hardcover edition of Linwood Barclay’s Find You First, two characters reviewing footage from a homemade documentary see a human hand beneath a dresser in the tiny bedroom of a trailer home. It’s one of many surprises tied to earlier and later twists in a story that moves with the speed of a Ferrari. It’s also the kind of plot point that will compel anyone who writes, sells or analyzes books in the thriller genre to look under the hood.

How does he do it? They’ll ask, knowing there has to be as much engineering as inspiration when Barclay draws up the blueprints for his tales. In this case it’s a simple premise around tech billionaire Miles Cookson, who has a terminal illness and wants to find several children he fathered via sperm bank decades earlier so he can leave them his money and inform them they might carry the gene for the same illness. Unfortunately for Miles, there’s an invisible antagonist who seems to think he or she will get rich if those heirs disappear.

The fact that Miles probably fathered as many as nine children opens up the possibility for a sprawling story. Barclay’s trademark ability to tell fun stories within stories ensures it stays interesting nonetheless. Again and again, he creates inner dialogues and brief, telling details that make the dubiously lucky “heirs” seem like people we know.

One who’s dispatched quickly and rather dramatically for example is a one of those terrible phone scam thieves the AARP keeps warning us about. Another is a typically insecure college student contemplating his girlfriend’s infidelity when a mysterious car pulls up to the curb alongside him during his morning run. Another —who becomes Miles’ ally—is funny and big-hearted Chloe Swanson, a diner waitress who drives a beat-up AMC Pacer and is far more interested in the billionaire’s wellbeing than his money.

Most of the potential heirs are being hunted by a pair of contract killers who, thanks to Barclay’s apt characterizations, likewise seem strangely familiar even to those of us who don’t know anyone who makes a living by murdering people. Along the way we also slip into the heads of the sperm clinic doctor and his office manager, Miles’ brother, Miles’ brother’s wife, and a few other people who appear in brief, punchily-written chapters.

In less capable hands these mental vignettes could turn into speed bumps in the race to learn who hired the killers, which heirs will survive, and which characters who aren’t heirs will also live or die. Yet Barclay somehow manages to shape them in a way that strengthens the voices of Miles and Chloe, who stand out as key protagonists-in-arms.

Some of that success is likewise driven by all of the precise plot points that keep the engine revving and the story on track. That hand under the dresser turns out to be a clue to the disappearance of one of the heirs and is connected to a car running off a road. It’s also tied to two cups of spilled coffee that end up casting suspicion on a character who might be connected to the heir’s disappearance.

Meanwhile a teenage runaway living in a New York City mansion owned by another billionaire fears she’s about to be murdered, so she plans a stunningly cinematic escape that ties yet another plot point to the finish line of this perfectly told story.

Compelling from beginning to end, Find You First will keep Barclay’s fans on the lookout for his next thrilling ride.