Everything We Didn't Say: A Novel 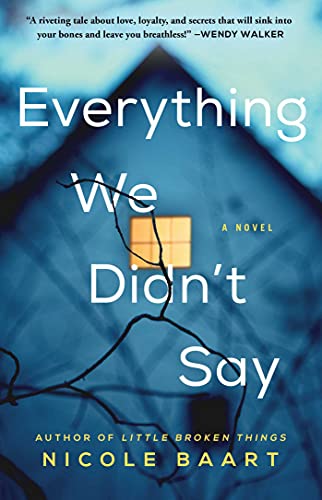 “Baart is an accomplished storyteller. She excels at layering concurrent plot threads, character arcs, and suspense with layer upon layer of storied detail . . . She builds her world character by character and sets them in motion to behave as they will.”

Nicole Baart, author of nine novels with excellent reviews and a mainstream following, continues in her well-honed tradition of family drama with a mystery at the core in Everything We Didn’t Say. Her particular craft is bit-by-bit revelation of the secrets that build and twist the narrative with speculation, curiosity, and an assortment of characters.

The novel begins with “The murders took place on a hot summer night, but to Juniper, it would always be winter in Jericho.” At the heart of this accessible novel is a woman who has given up her baby girl in the wake of an unsolved double homicide and a love affair that tore apart her friendship with her best friend. Almost 15 years later, Juniper’s motives for returning to her small town are complicated, so much so that she is unable to unravel them herself. Her librarian friend is dying of cancer, her daughter is coming of age, and the murders have not been solved. But here the book begins, and Juniper drives by a bullet-shot traffic sign, wondering aloud.

The story goes back and forth in time between “Winter / Today” and “Summer / 14 and a half years ago.”  Her almost-twin brother and life-long friend, Jonathan, remains the only suspect, and even after all these years, there are forces still trying to pin it on him. Today her daughter is Willa Baker, “all arms and legs and thirteen-year-old bravado and grace,” having been raised by family, but not knowing who her father is, while Juniper lived out her exile-of-shame in Denver

Each fact about Juniper in the present creates a question that is answered in the story of the past and becomes part of the mosaic of this story. In “Summer / 14 and a half years ago,” Juniper, in her last year of high school, was falling in love with a handsome, mysterious member of The Tate Family, whose land was caught up in the unresolved murders of Cal and Beth Murphy. And to add to that, her brother Jonathan seems to know something, but everything conspires to get in the way of any meaningful unravelling.

For a small town, the secrets are never really secrets; someone knows, someone witnessed something, someone else is gossiping or whispering or overhearing. Back and forth the reader becomes familiar with the reason for the book’s title Everything We Didn’t Say, as Juniper’s close relationship with her younger brother is on the rocks. And he’s not telling her anything.

As the author flashes back, the reader sees Juniper hanging out with the youngest of The Tate brothers—a seductive young man with a swagger and an air of danger. Jonathan, good big brother that he is, not only warns his sister away, but also he won’t tell her anything about what the Tate brothers are planning. Juniper’s spidey senses detect that her brother, who uncharacteristically hangs out with the Tates, knows what they’re planning—and it’s not good.

The drama unfolds in the past and present, and detail by detail, the night of the murder and the surrounding context, come to life over the course of the novel. In the meantime, there are tire slashings, pet poisonings, a podcast trying to solve the murders—and family secrets. Then under unclear circumstances, Jonathan nearly freezes to death when he falls through the ice. And although Juniper is determined to finally ask her brother about the night, about the murders—to fill in what she seems to be remembering—he ends up in Intensive Care in hospital, in a coma and unable to speak.

Baart is an accomplished storyteller. She excels at layering concurrent plot threads, character arcs, and suspense with layer upon layer of storied detail in her chatty prose. She builds her world character by character and sets them in motion to behave as they will. And yet she’s one step ahead of everyone, bringing all together in a satisfying finale. And her prose is peopled with red-blooded characters that reflect us in our human imperfections: She celebrates love, loyalty, and the evolving nature of family. An accessible, engaging ride.