Remembering the Greatest Coaches and Games of the NFL Glory Years: An Inside Look at the Golden Age of Football 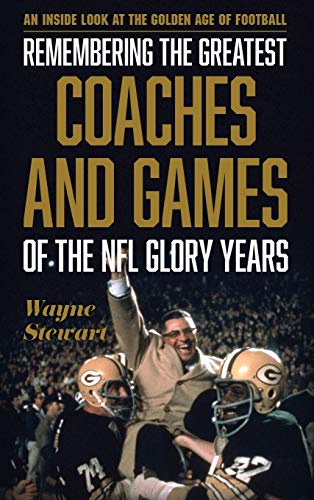 Remembering the Greatest Coaches and Games of the NFL Glory Years is a stroll down Memory Lane for this reviewer, who was raised as a diehard fan of the Tom Landry era Dallas Cowboys. It also takes a brief side trail along Nightmare Alley, resurrecting the emotional trauma of the Cowboys’ loss to the Green Bay Packers in the 1967 NFL Championship game known as “The Ice Bowl.”

Written as a companion book to his Remembering the Stars of the NFL Glory Years, author Wayne Stewart convincingly argues that football really did have a “greatest generation,” and it spanned the 1950s and 1960s.

In Part I, Stewart describes four pivotal games that he dubs the “greatest games of the glory years,” but also, arguably, were some of the greatest games in the entire history of the NFL.  He identifies them simply as “The Greatest Game Ever Played,” “The Ice Bowl,” “The Heidi Game,” and “Super Bowl III,” and any football fan worth his or her salt knows the impact each made on the sport.

The Greatest Game Ever Played featured the first sudden death overtime in an NFL championship game, with the Baltimore Colts beating the New York Giants. The Ice Bowl, of the aforementioned Nightmare Alley, was the coldest NFL game ever played and saw the Packers beat the Cowboys.

In 1968, NBC cut away from a live telecast of the New York Jets-Oakland Raiders game during the last 50 seconds to show the movie Heidi. The Raiders then scored 14 unseen-by-millions points in the span of nine seconds to secure a come-from behind win over the Jets. As the New York Daily Herald headlined the score: JETS 32, OAKLAND 29, HEIDI 14. A new rule was subsequently promulgated guaranteeing that future games would be shown to their conclusion.

And in Super Bowl III, the Joe Namath-led New York Jets of the upstart American Football League defeated the heavily favored NFL champion Baltimore Colts. Most thought it was a fluke but, as Stewart notes, when the AFL’s Kansas City Chiefs won Super Bowl IV, it was clear that parity between the leagues had been achieved.

In Part II, Stewart designates the coaches he calls the greatest of the Glory Years: George Halas, Paul Brown, Weeb Ewbank, Vince Lombardi, Tom Landry, Hank Stram, Don Shula, George Allen, and Bud Grant. Halas, of the Chicago Bears, may have been included more as a tribute to his overall influence on the game than his modest coaching success in the ’50s and ’60s (only one championship) and Bud Grant primarily for his successes of the ’70s with the Minnesota Vikings (four Super Bowl appearances starting in 1970, albeit all losses), although he did start that run with an NFL championship in 1969 that led to the loss in Super Bowl IV.

Stewart deftly connects the greatest coaches with the greatest games and with each other, which reflects how greatness begets greatness. Shula and Grant played for Brown. Ewbank coached the winning Colts in the Greatest Game Ever Played, while Landry and Lombardi were the defensive and offensive coaches, respectively, for the losing Giants. Landry and Lombardi later faced off with their Cowboys and Packers in The Ice Bowl, while Ewbank coached the Jets to a Super Bowl III win over Shula’s Colts in the same season that saw his Jets lose the Heidi Game. And, although not identified as one of the greatest games, the Chiefs’ parity-proving win in Super Bowl IV over Grant’s Vikings was under Stram’s helm.

During their heydays, it’s unquestionable that these coaches had star-filled teams but, as Stewart notes, they each had a nose for identifying talent. Speaking of Stram, though he could have said it of any of them, Stewart writes: “Naturally, Stram couldn’t win without the horses, but, like so many great coaches, he knew a thoroughbred colt when he spotted one.”

Other common themes Stewart traces among the coaches include discipline, an almost fanatical devotion to detail, and innovation. For the last, one merely has to consider Lombardi’s Green Bay sweep, Landry’s flex defense, Stram’s moving pocket, Halas’s use of motion and counter-plays, and the list goes on.

At its heart, this was an era when coaches led and players followed. These coaches demanded the same high performance from their players that they expected of themselves. For them, it was about team, not individuals, and about excellence, not celebrity. It was about seeking perfection. As Lombardi said, quoted by Stewart, “Practice does not make perfect. Only perfect practice makes perfect.” Again, the best begets the best.

Younger fans may roll their eyes and scoff when old-timers speak of the Glory Years of the NFL and start stories with phrases such as “In my day,” or “I remember when,” but after reading this book, you just may conclude that the old-timers have it right.