The Yugo: The Rise and Fall of the Worst Car in History 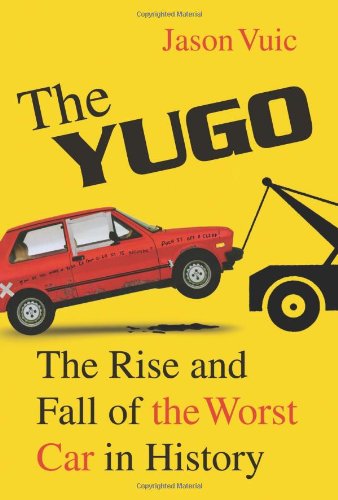 “Yugoslavia should be proud of this small car. Everyone will be
talking about it in the United States.” —Malcolm Bricklin

Everyone did wind up talking about the Yugo in the United States in the 1980s, if not for the reason intended by the shifty entrepreneur Malcolm Bricklin. In writing this nonfiction tale of the Yugo’s introduction into the U.S., Jason Vuic had the opportunity to appeal to two audiences. One audience consists of car buffs, people who cannot acquire enough knowledge of automobiles of the past or present—and who buy the major automobile magazines each month to take sneak peeks at the cars coming down the line.

The second audience is the group that loves human-interest stories. In this case, the book might have consisted of stories of people who actually bought Yugos and what that meant in their lives. Did they enjoy them? Did they love or hate them? Did they have near-death experiences in them?

Unfortunately, Vuic’s account reaches neither audience in a way that will prove satisfactory. There’s not a whole lot of detail in terms of the design, engineering, or manufacturing of the ill-fated car (other than descriptions of it as a modified Fiat). More surprisingly, there is not a single account in The Yugo that puts the reader in the place of someone who owned the car. But this is not the biggest fault with this account.

The story of the Yugo, even more than the story of the Chevrolet Corvair so well detailed by a young Ralph Nader, is a story of danger. The Yugo was a car that produced 3.6 deaths for every 10,000 cars sold. It was an extremely lightweight tin can that weighed just 1,832 pounds. Even though it did not share the road with today’s SUVs and light trucks, it nevertheless was clearly too light to be safe.

Let’s put this in context. The Yugo’s 1,800-plus pounds compares quite unfavorably to today’s smallest vehicles. A Toyota Yaris weighs 2,400 pounds, a Mini Cooper between 2,550 and 2,750 pounds, and a Volkswagen New Beetle weighs between 2,900 and 3,000 pounds. But these are cars with steel safety cages and crumble zones that were not even dreamt of back in the days of the Yugo.

Vuic is correct when he writes that, “people have come to expect so much more than the Yugo deliver(ed),” especially in terms of safety. How badly built was the Yugo? When the impacts of a collision at just five miles an hour were tested in a Yugo, the car suffered $2,197 worth of damage; over half of the car’s original value of $3,990!

Sadly, it is only when the reader is nine-tenths of the way through Vuic’s account that he/she finds an account of the tragic death of Leslie Ann Phulac. Phulac died when she drove her Yugo off the Mackinac Bridge in Michigan—a 199-foot high bridge. She was in the air a full six seconds before she hit the water. Sixty-four million drivers had passed over the bridge without incident.

The account of Phulac’s death is where this book should have begun not ended. The Yugo was not a funny or silly car despite the author’s light hearted tone; it was a poorly designed and manufactured death trap. Yugo, in fact, was sued by the “Yugos” litigation group of the Association of Trial Lawyers of America because the car was unsafe.

The Yugo met its demise in 1988, when dealers in the U.S. had a 133-day backlog of unsold cars. This substantiated Abraham Lincoln’s claim that you can fool some of the people some of the time, but in the end the public proves wise to the game.

It’s worth restating that the lack of stories from Yugo owners in The Yugo is a major deficiency. These might have been funny or sad (especially in the instances involving relatives of the almost 4 deaths per 10,000 owners), but would surely have been engaging. Real people lost money on these things and had their lives endangered. Their safety was very significantly compromised.

Vuic’s telling of the quick rise and predictable fall of the Yugo might have made—if very sharply edited—for a quite fascinating airline magazine article. But it veers off course far too often in its 213 pages of actual content, especially when comparisons are made to the Ford Edsel. The Edsel may have been unattractive, but it was a safe and well-built vehicle. The Yugo was far from being “The Edsel of the Eighties.”

Vuic does get it right at one point, the point at which he writes that, “. . . the Yugo is the worst car in history.” Enough said.

Reviewer Joseph Arellano served as a Public Information Officer for California’s consumer protection department. In this capacity, he worked closely with the Bureau of Automotive Repair and the state’s “lemon law” program dealing with unsafe and poorly manufactured cars. As a result, he was appointed to and served on the Ford Motor Company Consumer Advisory Board. He drives a safe VW New Beetle.