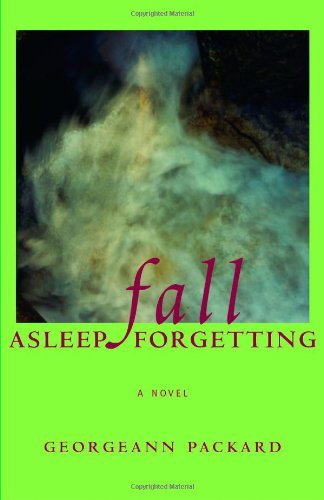 Georgeann Packard’s extraordinary debut novel, Fall Asleep Forgetting, is filled with such an array of original and motley crew of characters, we become almost spoiled for choice as we turn each delicious page of erotic food and heady sex. As the sleeve of the book tells us: “Whether black or white, gay or straight, young or old, liberal or conservative—all struggle with humor and heart to survive this summer of 2001. Some are plagued by overindulgence in lavish foods or religious zeal or sexual desire. Their lives collide in surprising ways and each, at some point, is provided an opportunity to act heroically.”

Paul Lang is a restaurant owner and poet, but with darker thoughts than average. He has decided to end his life and goes about arranging his will, hoping to secure some financial security for his wife. Despite having a head start in this endeavor, he fails to realize that sometimes even the best of plans never work the way they are originally intended. While heading eastward on a train, he soon reveals a sense of the demons within his head as the train makes an unannounced stop at the edge of town. It’s a grim place, with dilapidated buildings covered in weeds. His words sum up the place and his mood. “Could this day be even one shade bleaker?”

As the train moves on in its journey, so does our story, bringing us to a trailer park on Long Island Sound named Cherry Grove—a trailer park whose inhabitants we are never likely to forget. Even the trailer park is a story within itself. Once known as Paradise Grove Trailer Court, it remained named thus until Stephan Kazmierczak, known in Manhattan’s East Village as Cherry Pickens, came back to inherit it from his parents, with intentions of leaving his/her mark on the whole area.

Along with Cherry, there are a multitude of characters: Claude, county employee living in a silver Airstream Flying Cloud, is a diarist with dark secrets; Saugerties, a nasty homophobe and Korean War veteran; Sonny and Rae, parents of nine-year-old tomboy, Six, the real star of the story. Six is a mix of Scout Finch from To Kill a Mockingbird, and Mathilda from Leon. She is the anchor for some of the drifting souls in and around the trailer park. Six is such a memorable character that this reviewer would not be surprised to see her featured again in another novel from Packard.

With such a large ensemble of characters and situations, Fall Asleep Forgetting could very well have turned out to be nothing more than a jumbled disaster. Thankfully, in the skilful hands of Packard, this has not happened, and it’s to her credit she has managed such an achievement.

A master class in sparse, clear prose, Fall Asleep Forgetting is a compelling and mesmerizing read, infused with an elegiac ambience. It will make you laugh and cry in equal measures. You’ll not fall asleep forgetting this book.