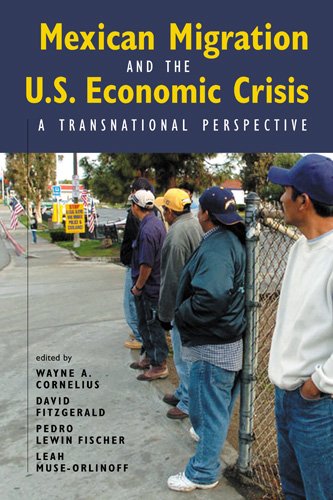 As with any social phenomena, an attempt to corral the scope of the issue into a single pen will leave many purviews outside the gates. In this particular examination of the flow of Mexican migrants into the United States, the authors state that the lack of jobs in the U.S.—not border enforcement—is postponing migration. However, although fewer people are coming over, the economic issues are still significantly troublesome for businesses, governments, and citizens on both sides of the border.

In Mexican Migration, the authors have taken slices of life and explored the dynamics surrounding each: coping, enforcement, economics, dual cultures, education, values, family dynamics, realities, and community. Each of the nine chapters offers its own conclusion to the study but ultimately they all end up with the same result: Mexican migration is damaging to the health, welfare, and cultural way of life for the Mexican people. What differentiates Mexican Migration from other books on the same topic bursting onto the market today is a distinctive approach to the issue. The book is a follow-up to Mayan Journeys by the same editors and authors. The book is based on the Mexican Migration Field Research Study and Training Program (MMFRP) in the Center for Comparative Immigration Studies, University of California, and San Diego. The location is a small village in the Yucatan’s north-central region called Tunkás, a Mayan-speaking town of approximately 2,600 people. Although the book is an academic study, it has more of a feel of returning to a community of friends called Tunkaseños whom we have not seen in a while and are now catching up with their lives. The Tunkaseños are a close group of people who only began migrating to the United States in the last 20 years. Before that and for many decades they have been moving back and forth to Mérida and other tourist communities on the Mayan Riviera (Cancún, Playa del Carmen) for better paying jobs only a few hundred miles from home. Granted, this book is an industrial-strength academic production on Mexican migration, yet the laser-focus on one community’s struggle with survival brings a humanistic clarity not found in high atmosphere flyovers.

During the research process, every household in the tiny village was visited and usually everyone in the household was included in the discussions. This approach allows the authors to tell us in-depth personal stories about families they have gotten to know over the years.We learn, for instance, that as the economy slowed down and fewer jobs were available for Mexican migrants, that Doña Yolanda and Doña Margarita pawned some of their family jewelry to pay household expenses. When prospective jobs never arrived, both lost their jewelry to the pawnshop.

Reducing expenses for the Tunkaseños meant looking for alternative sources of income. The study revealed informal yet complicated attempts by this tight-knit community to keep their family and households together.

“In addition to reducing expenses, many Tunkaseños are entering the informal economy in search of an alternate source of income. Some launch home-based businesses, such as selling prepared food to other town residents or engaging in traditional jobs that require low start-up investments, such as weaving hammocks. Identifying a profitable niche involves innovative thinking and a unique business strategy that enables someone to compete in the town’s large informal sector.”

Perhaps it is the approach the researchers used to reveal family disruption that made this book so much more meaningful and intimate. The book shines a brutal light on the stress of economics that pushes families apart. The grinding down of poverty on a family is exponentially confounded when one parent leaves the family home to live and work hundreds or thousands of miles away for long periods. In many situations, the separation is so great that the family is never reunited torn by time and broken relationships.

This scenario is not unique anywhere and always damaging to our society.

In Mexican Migration we learn how the Tunkaseño families struggle for solutions that are unique and surprising by looking for an “internal migration” opportunity that has a lower degree of disruption for the family. A job within Mexico, maybe at one of the many tourist resorts and hopefully just a few hundred miles away, will offer proximity and ease of communication, reducing the overall financial and emotional costs. Even though the family may get higher wages elsewhere, the return for family togetherness is a price they will pay.

It seems like a logical and reasonable solution, yet it cannot always work. As an example of the struggle between internal and international migration, we hear about Señora López’s brother who migrated to Cancún to support his wife and children on the income he earned working in a fish market. Her husband, on the other hand, had to go to the United States, where higher salaries enabled him to pay for their son’s cancer treatments. Unfortunately, Señora López tells the researcher, her son died anyway.It is this detail of personal information accumulated over many years that is presented thoughtfully, well researched, and without drama that affirms this scholarly textbook a place both on an academic shelf and well beyond the classroom.Reviewer Geri Spieler is a journalist and author. Her latest book, Taking Aim at The President, was published by Palgrave Macmillan.