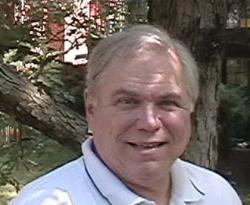 Joseph Barbato is an author and journalist whose books include Writing for a Good Cause and several literary anthologies. He is a former columnist and contributing editor at Publishers Weekly, and has written about books and authors for the Washington Post, USA Today, the Los Angeles Times, the Chicago Tribune, Newsday, the Progressive, Smithsonian, the San Francisco Chronicle, America, and The Chronicle of Higher Education.

A long-time contributor to Kirkus Reviews, he has served as a juror for the Kirkus Prize in nonfiction.

Mr. Barbato was born and raised in New York City and earned an M.A. in American studies at New York University, where he worked for many years as a writer and editor. He was co-editor of The Remington Review, a literary magazine, and served twice as president of Washington Independent Writers, a regional organization of freelance writers.

A former editorial director at The Nature Conservancy, he has been a consultant to MIT, the Brookings Institution, the Union of Concerned Scientists, the American Red Cross, Feeding America, Oxford University, and many other nonprofits. His work for clients has included writing projects on science, health, urban life, and cultural affairs as well as public policy issues.

He lives in Alexandria, Virginia.

Writing for a Good Cause: The Complete Guide to Crafting Proposals and Other Persuasive Pieces for Nonprofits

Heart of the Land: Essays on Last Great Places

Rock Concert: An Oral History of an American Rite of Passage

“This revealing, nicely crafted account of rock performers from Bill Haley and His Comets to Pink Floyd will appeal greatly to nostalgic rock fans.”

“White Hot Hate is nothing less than a riveting case study of hatred of the Other.

“A thoughtful and admiring account of a young British man’s rise from lackluster roots to world fame as a science fiction writer.”

The Least of Us: True Tales of America and Hope in the Age of Fentanyl and Meth

“The Least of Us confirms his place as a leading chronicler of an American nightmare.”

Burning Boy: The Life and Work of Stephen Crane

“A splendid appreciation, from one master to another, written with great warmth, fervor, and intelligence.”

“A fascinating page-turner, Rogues’ Gallery will appeal to true crime buffs and anyone interested in the dark side of life in late 19th century New York City.”

The humorist S. J. Perelman (1904–1979) was an American original. His work has sat little-noticed in a Fireside trade paperback edition for years.

The Rage of Innocence: How America Criminalizes Black Youth

“The Rage of Innocence is an important and timely book—an intelligent, compassionate, and indispensable argument on behalf of Black children.”

Lugosi: The Rise and Fall of Hollywood's Dracula

“Shadmi’s deeply absorbing and moving biography will appeal to Dracula afficionados of all ages.”

Dopamine Nation: Finding Balance in the Age of Indulgence

“Authoritative, compassionate, and valuable, this book provides a fresh understanding of the many dangers of addiction . . .”

The International Brigades: Fascism, Freedom and the Spanish Civil War

“A highly readable, monumental account of the idealism and suffering of the most international army ever assembled since the Crusades.”

The Icepick Surgeon: Murder, Fraud, Sabotage, Piracy, and Other Dastardly Deeds Perpetrated in the Name of Science

The Cult of We: WeWork, Adam Neumann, and the Great Startup Delusion

The Man Who Hated Women: Sex, Censorship, and Civil Liberties in the Gilded Age

“A bright, deeply researched narrative that will fascinate feminists and history buffs.”

After Cooling: On Freon, Global Warming, and the Terrible Cost of Comfort

“Well-written, unexpectedly engaging, and perhaps a bit overlong, After Cooling is a knockout debut by a gifted writer.”

Battle for the Big Top: P.T. Barnum, James Bailey, John Ringling and the Death-Defying Saga of the American Circus

“A nicely crafted popular history, Battle for the Big Top will appeal to anyone who has ever wondered about the men who gave us the thrill of three-ring circuses.”

Republic of Detours: How the New Deal Paid Broke Writers to Rediscover America

“Borchert’s history is bound to appeal to readers interested in the American 1930s, the careers of noted writers, and the U.S.

Why Didn’t You Just Do What You Were Told?: Essays

“Jenny Diski is an absorbing, savagely witty, insatiably curious, and gifted writer. She is direct, unafraid, and full of surprises.”

The Plague Year: America in the Time of COVID

“Many readers will wonder what future generations will make of this sad and epic account of failed national leadership during a health catastrophe.

Don't Call it a Cult: The Shocking Story of Keith Raniere and the Women of NXIVM

“Both captivating and frightening, Don’t Call it a Cult will astonish most readers.”

Nothing Personal: An Essay

“In this short, stunning work, with his inimitable use of language, Baldwin distills the essence of his pain and wisdom and points a way for our own time.”

The Free World: Art and Thought in the Cold War

“In these pages, ideas and creativity still matter, making this welcome book a cause for celebration.”

The Machine Has a Soul: American Sympathy with Italian Fascism (America in the World, 39)

“illuminating, well-written, and offers sharp insights into fascism’s strong appeal, for some, in times of turbulent change.”

“will appeal to visionaries yearning for an end to man-made divides and the deliberate building of bridges of kindness and compassion.”

Hawking Hawking: The Selling of a Scientific Celebrity

Rock Me on the Water: 1974—The Year Los Angeles Transformed Movies, Music, Television, and Politics

“a welcome blast from the past for many readers.”

Children Under Fire: An American Crisis

“at once painful to read but vitally necessary if Americans are to understand the ‘widely ignored’ epidemic that affects millions in ways we still do not fully understand.”

Traveling Black: A Story of Race and Resistance

“Filled with vivid first-person accounts, Traveling Black is a superb history that captures a shameful aspect of the American story.”

Beloved Beasts: Fighting for Life in an Age of Extinction

“Humans have probably been extinguishing bird species for thousands of years,” writes Michelle Nijhuis in her absorbing history of species conservation, Beloved Beasts.

Shaking the Gates of Hell: A Search for Family and Truth in the Wake of the Civil Rights Revolution

“An affecting blend of memoir and history, Shaking the Gates of Hell offers an unflinching account of a family in a tumultuous time.”

“In Gates’ capable hands The Black Church is a stirring story, told with compassion, respect, and not a little awe.”

Tangled Up in Blue: Policing the American City

“Provocative, intelligent, and useful, Tangled Up in Blue will help many readers understand the nuances shaping the present crisis in American policing.”

The Fragile Earth: Writings from The New Yorker on Climate Change

Nearly two dozen outstanding articles on climate change, just in time for the U.S. return to the Paris accords. Now, what?

Soul City: Race, Equality, and the Lost Dream of an American Utopia

American history is “littered with utopian experiments that began with giddy promise and ended in depressing failure,” writes Thomas Healy. In Soul City, he tells one such story.

Ram Dass (1931–2019), formerly Richard Alpert, is best known as the Harvard psychologist and researcher (his partner was Timothy Leary) who was fired by the university for his controversial experim

Work Won't Love You Back: How Devotion to Our Jobs Keeps Us Exploited, Exhausted, and Alone

“bound to make many readers reexamine their working lives.”

Crap: A History of Cheap Stuff in America

“A challenging read that illuminates harsh truths of our time.”

Manipulating the Masses: Woodrow Wilson and the Birth of American Propaganda

“Both fascinating and troubling, this thoughtful history reveals the roots of the official spin that dominates much of today’s news.”

The Apocalypse Factory: Plutonium and the Making of the Atomic Age

“a solid, valuable work on a critical aspect of America’s wartime quest for an atomic bomb.”

“Few other books reveal the fascinating inner journey that transformed Eleanor from an emotionally choked-off young woman into a mature leader who inspired millions.”

The Great Secret: The Classified World War II Disaster that Launched the War on Cancer

Official denial never goes out of style. In our own time, an Iraqi spokesman famously declared: "There are no American infidels in Baghdad.

The Grifter's Club: Trump, Mar-a-Lago, and the Selling of the Presidency

“The Grifter’s Club will appeal to political junkies who can’t get enough of the present national moment.”

She Come By It Natural: Dolly Parton and the Women Who Lived Her Songs

“A small, fun, and insightful book, She Come By It Natural can be enjoyed on its own or as a perfect companion to Smarsh’s Heartland.”

Weird: The Power of Being an Outsider in an Insider World

Atlantic staff writer Olga Khazan tries to do much too much in her well-written, often absorbing work of memoir and reportage, Weird: The Power of Being an Outsider in an Insider World

“Engaging and provocative, Diamond’s encyclopedic meditation will certainly help readers—no matter where they live—think about what lies ahead for the outlying areas of our cities.”

A Traitor to His Species: Henry Bergh and the Birth of the Animal Rights Movement

“Highly readable, A Traitor to His Species ably details the ‘uncomfortable debate about the proper balance between animal rights and human interests . . .’”

If Then: How the Simulmatics Corporation Invented the Future

Liar's Circus: A Strange and Terrifying Journey Into the Upside-Down World of Trump's MAGA Rallies

“A sobering, scarifying account that leaves the reader exhausted and in awe at the author’s endurance during these ritual gatherings of the MAGA tribe.”

On May 10, 1869, as the last ceremonial rail was bolted down at Promontory, Utah, a San Francisco newspaper declared America’s first transcontinental railroad a “victory over space, the elements, a

Mill Town: Reckoning with What Remains

“Kerri Arsenault’s portrayal of the devastating impact of unregulated capitalism on the lives of poor, mainly dark-skinned people is a serious indictment of the American way.”

His Truth Is Marching On: John Lewis and the Power of Hope

“the stirring His Truth Is Marching On will serve nicely for readers who want to understand the essence of Lewis . . .”