Fragmented Citizens: The Changing Landscape of Gay and Lesbian Lives 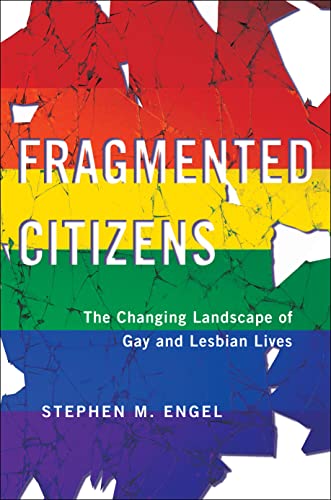 This is an important book on an important subject, but not for the faint-hearted in its very detailed treatment of the ebb and flow of citizenship recognition and rights for LGBT individuals in America. Stephen Engel reviews the patchy though progressive evolution of these rights at federal and state levels primarily by examining cases and landmark rulings of the Supreme Court.

He demonstrates that homosexuality has variously been defined as a sickness and a criminal offence; an “act” to which the law turns a blind eye when it is committed in private, but which cannot be given public recognition through the act of marriage, with all the citizenship rights and obligations that entails relating to property rights and inheritance, filing of joint tax returns, parenting, adoption etc.

It should be noted that whilst the acronym LGBT is scattered throughout the book the primary focus is on homosexuality with a few references to transgender status.

Engel demonstrates that the Supreme Court’s ruling of June 2015 on the legality of same-sex marriage though a life-changing event has not solved the issue of “fragmented” rights for homosexual individuals as many states have been reluctant to come into line on the same-sex marriage ruling. And even those who have accepted this change do not yet guarantee, for example, protection against discrimination in employment or other rights for homosexuals. The different institutions and associated rights regimes to which individuals are subjected—the military, the Department of Labor, social welfare, etc. are not yet moving in step. It is perhaps surprising to read that at some moments the military has been ahead of the curve in its recognition of same-sex relationships.

Summing up the lack of congruence between different institutions and their associated recognitions and rights Engel states, “As of June 26, 2015, the Court recognized a right to marriage for gays and lesbians, and yet public acknowledgement of that marriage may endanger one’s livelihood—in so far as there exist no protections against employment discrimination on the basis of sexual orientation—in twenty-eight states. Marriage may endanger one’s fair access to housing in twenty-eight states. And marriage may endanger one’s fair access to public accommodations in twenty-nine states. A gay man or lesbian may get married on Sunday and may theoretically lose his or her job and home on Monday.”

Engel maintains that recognition of full citizenship status by the justice system and other rights regimes lags behind political commentary and the overall public recognition as evidenced by the media and pop culture. This justifies the book’s overall approach that focuses less on the social-movement aspects of the struggle for equal rights and demonstrates how different aspects of the laws and policies that govern peoples’ lives offer different regulatory recognitions to gay and lesbian individuals.

He sees the “critical developmental insight” of this book is that “the polity is made up of multiple clashing orders.” And he has trained this insight on “an under-examined area within APD (American Political Development) scholarship: gay and lesbian politics.” As he notes at certain times the primary source of dominance in peoples’ lives may not be the state but other non-state institutions—“medicine, science, religion, education, private-sector corporations” and the importance of the state will be contingent on social and historical context. This insight would perhaps not be regarded as so startling by most sociologists?

Given that the author sees his book as a break with APD tradition both in content and approach its primary audience must be students of American political development, though gay and lesbian activists will find much to interest and inspire in this detailed treatment of advances and retreats across different institutions and rights regimes.